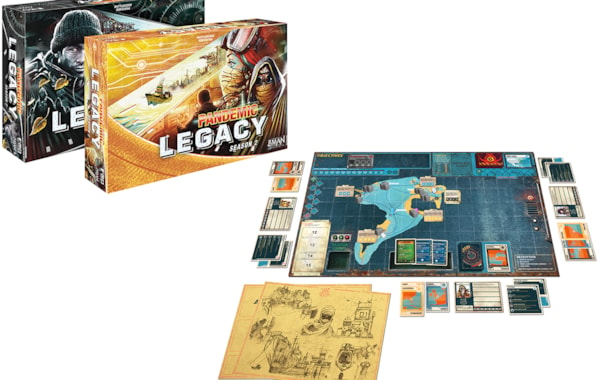 Matt Leacock and Rob Daviau have done the impossible. Not only does Pandemic Legacy: Season Two match the expectation set up by its astonishing 2015 predecessor, it exceeds it, presenting a breathtaking experience that proves the co-designing pair continue to understand and apply the groundbreaking interactive storytelling format better than anyone else.

A huge part of Pandemic Legacy’s singular atmosphere comes from uncovering its story and ever-changing gameplay, so we’ll be steering clear of spoilers here. The out-of-the-box situation is that seven decades after the first season the world has fallen into complete disarray, with a single incurable plague – rather than Pandemic’s iconic four diseases – now threatening the scattered remnants of humanity. In the background lurk the mysterious Hollow Men, an antagonistic force that tears down the players’ supply centres between games (a thematic bit of logic that neatly explains the need to reset) and casts a shadow over the unfolding narrative, which once again takes place over the course of 12 in-game months, each consisting of up to two matches. Win or lose (and you will lose – this is a much less forgiving game than Season One), the story keeps ticking on, avoiding any frustration of feeling like you’re missing out on important story beats or gameplay unlocks – eventually, you’ll see almost all the game has to offer, albeit in a unique order.

That Season Two is set in a world already gone wrong is significant. You see, while Season Two looks like Pandemic and bears its name, its action feels distinctly different from the well-worn globetrotting battle against spreading sicknesses. Where Pandemic has long been a game about minimising the number of cubes on the board, Season Two turns the formula on its head, with the majority of plastic pieces now representing vital supplies distributed to each crumbling city and floating haven – if supplies start getting low, there’s the risk of the unstoppable plague taking hold and finishing off the few people left, reducing the population in any cities affected. This becomes tougher and tougher as the year wears on and the available provisions drop with each successive month – December’s stark ‘0’ is a reminder from the off that you need to find a way to survive, fast. Searching for this means of survival is a double-edged sword, as discovering new locations means stretching supplies thinner and thinner but also offers the chance to bolster the pool of abilities and upgrades available.

In that sense, then, Season Two becomes a game even more focused on pre-emptive planning than reaction. In standard Pandemic, a disease cube or two on a city wasn’t much of a problem. Here, even a single plague cube becomes a huge issue, immediately pushing the players one step towards failure and risking the chance of character exposure – leading to permanent negative ‘scar’ effects and death – as well as the depletion of a city’s population. Because they can’t be removed, making sure as many cities are protected as possible is crucial.

Driving this drama is the free ability to pick up supplies from another location, resulting in players needing to run around the map, redistributing their paltry stocks in a futile effort to hold off the plague while they simultaneously race to build supply centres. The heightened tension is matched by the more claustrophobic setting, with a smaller number of cities being bombarded more often by the relentless infection deck.

Each individual change to the core gameplay is relatively minor – this is still Pandemic, after all – but they add up to an experience that’s much more revolutionary than it first appears, meaning even Pandemic pros should make use of the practice prologue to get to grips with the changes in store.

The sense of exploration is what truly sets Season Two apart from its forebear. The main board begins almost entirely hidden, with only a handful of cities in four regions open for access. As players use the new recon skill, they uncover chunks of land that join the game, connecting to extra locations that can be searched using a second action to scratch off panels on their cards and trigger constantly surprising secrets, ranging from extra atmospheric dressing to major twists and gameplay additions. Unlike Pandemic’s fixed map, players here can create their own structure of routes, resulting in a world that – even more so than in the first game – feels dynamically shaped by the actions of each group.

Season Two can be jumped straight into and enjoyed if you’re new, but if you completed the original Pandemic Legacy you’ll find many of the story reveals especially rewarding, as they fill in the gap between the games and show what happened to some of the locations and characters after the conclusion of the first season. One late-game beat had our group literally gasping out loud as we realised its wider implications for the world.

What a world it is, too. This isn’t just the best Pandemic game ever made when it comes to gameplay – it's also the best-looking Pandemic to ever grace the tabletop, alongside last year’s sumptuous Pandemic Iberia. There’s a wonderfully lo-fi radio aesthetic to the main board and cards, with fuzzy static, twiddly knobs and frequency dials tying beautifully into the rebuilding-from-the-ground-up plot and old-style reconnaissance of the story.

The art is most eye-watering when it comes to the characters, who now start as more than pre-fab tropes. Each character sheet begins completely blank, with players picking a role and related talent – such as a farmer able to create supplies with greater ease, for example – before deciding a name, age and home for their avatar. (Rather ominously, there’s also a space for place of death.) Completing the character is a picture sticker – a small change from the set appearance of past Pandemic characters, but one that intensifies the emotional link between player and pawn. In another sharp change from the fixed ‘three scars means death’ injury system of the original, each character sheet has a series of small boxes scratched off one at a time as they’re exposed to the plague – but the application of scars and death is different on each sheet, meaning your heart will be in your mouth with every tense reveal.

The first Pandemic Legacy excelled in its weaving of a story for its players to remember. It was more than a game – it was an experience shared between friends, lovers, strangers. There are few other titles that could inspire fans to frame their individual end-game board and hang it on their wall. Season Two is an even more personal game; yes, it has the gasp-out-loud surprises and twists you’d expect from its creators, and a much stronger narrative thread than the first season, but it’s in its storytelling outside of the box that the game continues to stand alone. Pandemic Legacy may no longer be one of a kind, but the act of playing it remains unlike anything else.

Season Two doesn’t just improve on the astounding experience of the first Pandemic Legacy; it takes things in a direction that feels true to the series’ universe while exploring fresh gameplay concepts and storytelling with resounding success. It’s an incredible achievement that absolutely everyone should play.

TRY THIS IF YOU LIKED… GLOOMHAVEN

The pair that defined what a legacy game could be return to prove they’re still the most exciting designers working with the innovative format today.

This review originally appeared in Issue 13 of Tabletop Gaming. Pick up the latest issue of the UK's fastest-growing gaming magazine in print or digital here or subscribe to make sure you never miss another issue.