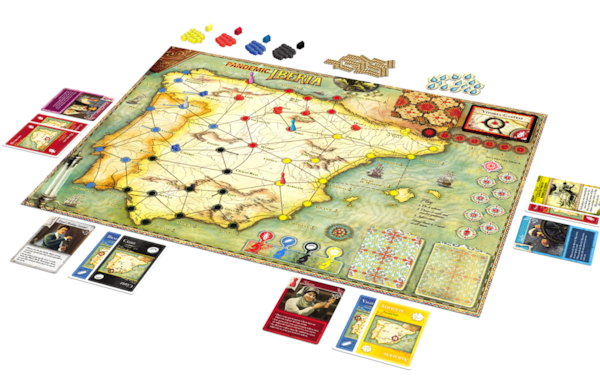 It seems the tabletop industry has come down with a severe case of Pandemicitis.

Initially diagnosed in 2008 with the original strain of the condition, it grew at a steady pace over the following few years with new expansion variants: On the Brink, In the Lab and State of Emergency.

There were also brand new evolutions, in the form of dice game The Cure and card game Contagion, both released in 2014.

The following year, the condition’s development was accelerated by the first season of Pandemic Legacy, a severe so-called ‘legacy’ mutation of the original form that led to widespread cases of acclaim and suggestions that it had been identified as the ‘Best Game Ever’ – a known side effect among many existing patients with Pandemicitis.

2016 once again saw the condition continue to spread with unbridled speed, with The Cure expansion Experimental Meds, Lovecraftian reimagining Reign of Cthulhu and, finally, Pandemic Iberia all appearing over the 12-month period.

With Pandemic Legacy: Season Two already highly rumoured to appear later this year, is there any chance the unrelenting release cycle of Matt Leacock’s virally admired series has finally produced a weak link in its latest offering? In short: no. In fact, Pandemic has never looked better.

Pandemic Iberia is set in the eponymous peninsula during the middle of the 19th century as nasty diseases such as malaria, typhus, cholera and yellow fever take hold. Unlike recent spin-off Reign of Cthulhu, the core of the gameplay remains largely untouched – but there are significant changes in line with Iberia’s historical transplantation.

Most notably, diseases are no longer cured or eradicated – merely researched. As in standard Pandemic, the aim is to fully research all four before too many outbreaks occur or you run out of disease cubes or cards, but cashing in five cards to research a disease doesn’t permit you to remove extra cubes when curing it later. What is does allow you to do, however, is purify water more easily.

Purifying water is one of the major gameplay additions to Iberia, reflecting the steps taken at the time to combat the spread of the sicknesses en vogue while also introducing mechanics similar to those introduced very early on in Pandemic Legacy. Discarding cards allows the placement of purification tokens in regions that subsequently prevent the placement of that number of cubes on the surrounding cities, providing a counterbalance to the inability to mass-cure diseases in later stages and introducing greater levels of strategic consideration to safeguarding against outbreaks.

While the turn framework remains the same – four actions, draw player cards, draw infection cards, repeat – there are further new actions. In news sure to prick up the ears of Ticket to Ride fans, in lieu of the ability to charter a flight to cities you can now freely build railroads along most routes, which then allow you to zip along constructed routes to any city on the tracks as a single move. This can be crucial as the player deck runs low and you’re forced to rush to the nearest hospital to research the last disease, with efficient routes paying dividends and avoiding the painful slow death of spending turn after turn crossing the map.

This particular usage is doubly important in Iberia, as only four hospitals can be constructed at any one time and each much occupy a specific colour-coded region on the board – a small but impactful change from the relative abundance of research stations on the original Pandemic’s global map.

The other key way to travel is by sailing between port cities that, unlike Pandemic’s universal routes between countries divided by stretches of water, requires the sacrifice of a card (unless you take on the role of sailor). By making the emergence of diseases harder to stem but offering greater variety in countermeasures and transportation, Iberia offers a subtly refreshing but comfortably familiar new spin on Pandemic’s arguably unbeatable gameplay foundations.

With enough changes to move it away from its ancestor, Iberia isn’t compatible with any of the Pandemic expansions released to this point. Happily, a couple of optional gameplay variants similar to those introduced in the add-ons and inspired by the medical threats of the time come packed right into the box, including the additional challenge of managing the flow of patients between hospitals and souped-up diseases with extra attributes based on four of real life’s most unpleasant maladies. The player event cards are similarly historically accurate, ranging from the recent invention of the mail system and telegraph to overseas migration – all are backed up by explanations in the back of the rulebook.

Each player’s role has been adjusted to reflect the jobs of the time, with agronomists, rural doctors and royal academy scientists replacing medics, contingency planners and operations experts. Pandemic has always excelled when it comes to the variety of not just its roles but also the people that fill them, and Iberia is no exception in this regard with excellent portrayals of men and women alike – although the racial diversity is less prominent than previous Pandemic titles, perhaps due to geographical and historical accuracy regarding the 19th century European region. Although it will vary with the way you and your own group approach the fight against disease, we also found the role card abilities to be far more balanced and equally useful than in vanilla Pandemic, from the rural doctor’s improved curing and the railwayman’s extra track-laying skillto the politician’s city card-swapping prowess and the nurse’s prevention token, which travels with her and stops the infection of adjacent cities.

Pandemic Iberia is reportedly being released as a single print run, a fact highlighted by the ‘Limited Collector’s Edition’ badge on the front of the box. As a collector’s item, it is a gorgeous set, with sundrenched artwork, a beautifully illustrated main map and exquisitely-patterned card backs. The warm tones and artistic flair are a far cry from the effective but cold blues and neon colour scheme of Pandemic – this is a board game to leave out on your table so it catches the eye of every visitor. The components are all of the high quality you’ve come to expect from Pandemic releases – although we did encounter a few misshapen disease cubes and spotted a couple of typos in the rulebook that detracted from the feeling of special treatment the rest of the box’s contents exudes.

Yet, with so many meaningful gameplay changes and the added thematic strength of history at its heart, it’s hard not to feel a pang of regret that Pandemic Iberia is to be just a limited edition release. No doubt, this is first and foremost a release for Pandemic diehards looking for a new way to re-experience the mechanics they love, but it’s also a worthwhile standalone release that offers something unique for fans new and old alike.

So much more than a simply prettied-up spin on the acclaimed franchise, Pandemic Iberia is a stunning package with meaningful gameplay changes and a historical theme that radiates from every pore of its beautiful artwork and design. Whether you’re an existing Pandemic fan or not, this is well worth your time.