This section of the website contains a variety of bits and pieces, such as free downloads of additional material that we didn’t have room for in the magazine and, occasionally, completely exclusive ‘extras’ for visitors to the website. Check back often to see what’s available! 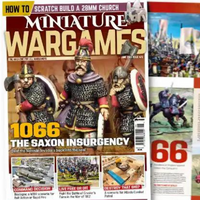 These downloads are relevant to articles that originally appeared in Miniature Wargames Magazine. Click to pick up your copy!

A key for the illustrations of Rio Grande

Extra content to accompany Enter the Portal and Peninsula Adventures.

Extra content to accompany Send Three and Fourpence, Solitaire Rules for ACP164 and Beyond Thunder Box.

Extended historical information sheet to accompany the exclusive, Operation Archery scenario from Baueda Wargames.
Black Powder weapons information for use in the Smugglers & the Hangmen scenario by Chris Swan

Wolf and Cave Bear card artwork for the exclusive Elder Scrolls: Call to Arms scenario, Voice of the Sky.

By Crom! Rules for use with Chris Swan's Hollywood on Hood feature.

Map for the Wolf in Sheep's Clothing scenario for Bolt Action.

Scenario and player aids for Albedo Combat Patrol.
Open play sheet for Dark Side of the Moon.
Rebel and Union maps for Send Three and Fourpence.

Rules and Character Sheets for Chris Swan's "Quick on the Draw" feature.

By Crom! Rules play sheets and cards for use with Chris Swan's Blackmail, Nags & Dags feature.

By Crom! Rules play sheets and cards for use with Chris Swan's Norse Quest feature.

Campaign rules, Play Sheet and Country Cards to accompany Frontier Warfare Part one – Principles and Tools by Chris Jarvis. All files are PDF.

Map to accompany Send Three and Fourpence – Daddy is swearing: The battle of St.Pierre by Conrad Kinch.

Special cards to accompany Send Three and Fourpence – “Little Inkerman” scenario for The Men who would be King by Conrad Kinch.

Play sheets to go with the Cloudships of Mars game appearing in issue 409 of Miniature Wargames magazine.

Cards for Mad Dogs and Englishmen.

Extra content for Martin Pike's The Battle of Jutland (Part two) feature - Including charts, tables and BTH files (to be plugged into the Berthier program and played). Click here to download the zip file.

Buildings and aircraft artwork for Jeff Brown's The Battle of Crete article. Click here to download the PDF. To be printed at A4 size for 1/300th scale.

Extra material for Andrew Rolph's article: The red empire strikes back – fighting the Great Patriotic War one battle at a time. Click here to download a PDF.

Extra material for Andrew Rolph's article: The red empire strikes back – fighting the Great Patriotic War one battle at a time. Click here to download a PDF.

Jeff Brown’s print-and-make rendition of the Alamo buildings. Click here to download 8Mb ZIP file. (Use your system’s normal method to ‘unpack’. You can right-click the link and “Download Linked File As…” to save to your computer.

Playing cards for “Snowfall” by Marcus Wheeler, and a raft of maps, game aids and files for Mike Haran’s “Peloponnesian War” game. (Click here to download a 28Mb ZIP file – use your system’s normal method to ‘unpack’. You can right-click the link and “Download Linked File As…” to your computer.)

Extra material provided by Andrew Rolph to accompany his “What – no Wellington?” rules, including a Quick Reference Sheet in Excel, a Powerpoint file explaining manoeuvres and a sheet of Charge Intentions counters in Word. (ZIP file – just download and use your normal method to ‘unpack’, usually by just double-clicking.)

Everything you need to play Martin Pike’s Korps Harteneck game (most items supplied by the author in their original format). 36Mb ZIP file – download to your desktop and double-click to unpack the Word and image files it contains or use your normal ‘decompression’ software.

The high-resolution (9Mb) battle map and Command Chart for Dan Mersey’s Battle of Evesham 1265. This should print out extremely well onto A3 or even A2 sized paper. As for all images, right-click and “Save Image As…” to your hard drive.

Jeff Brown’s PDF kit for Hougoumont from our Waterloo special (page 38 of the magazine at full 300dpi resolution).

Jeff Brown’s PDF kit for La Haie Sainte from our Waterloo special (page 39 of the magazine at full 300 dpi resolution).

Both pages should be fine for printing out at up to at least double the size printed in the magazine (equivalent to 150dpi) on a normal desktop printer. use your printer software to scale them up or down.

Steve Jones’ map of Bavaria in 1809 for his “Disaster on the Danube” campaign.

Henry’s interview with the Perry twins from Battlegames issue 22, 2009.

Matthew Green’s diagram of the wargames table for the “Vitoria 1813” article. (JPG)

Click here for map to accompany “Advance on Budapest ’44” article by Dave Brown (.jpg file of author’s own sketch map)

Pegasus Bridge model for 1/300 scale games from “Bridge for the taking!” article by Jeff Brown (PDF)

Our Code of Conduct for Tabletop Gaming Live events (PDF)