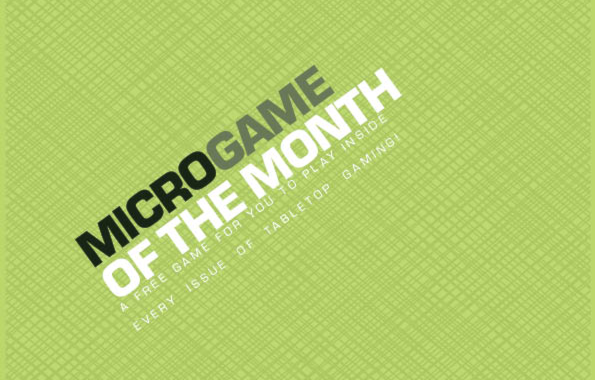 Each month Anna Blackwell curates a free game for you to play in the mag, and now you can get them all at once

A teacher reached out to us yesterday to say that our microgames have been a good source of entertainment, in particular for children still at school because their parents are key workers.

But of course, unless you have a copy of the mag (you can subscribe here, FYI) with the special link in, you won’t have been able to find them anywhere.

So, we thought we’d change that today.

Here’s 14 Microgames you can play for absolutely free (minus printing cost and the labour used with a pair of scissors of course).

What do you need to play these free microgames?

Most of these games may ask you to print out the PDF to create tokens, maps, and in one case, a dice. So you’ll need a printer, a pair of scissors and a bit of time.

Here's some tools for playing  pen and paper games online...

Some are just ‘theatre of the mind’ games, which just need your brain, and the brains of those playing with you, switched on. This might be the hardest thing to get hold of.

Others have specific requirements, like a Jenga tower, dice, or a pack of cards. If you don’t have dice, you can use Google’s free dice roller online, or any number of smartphone apps. Deck.of.cards is an online deck of cards, which can  be shuffled and dealt as you need to. While not ideal, this is an online version of a Jenga tower.

1 Ghost Writer By Jay Iles. Two player programming RPG. One person plays the scanner, the other programmer, and you’ll have to answer the question: does it scan?

2 Ninja vs Robot By Experimental Playground (Jason Sondoh & Robertson Sondoh Jr). Can you make it all the way to the castle before succumbing to the robots?

3 Space Planes by Glenn Ford. Two to six player space war game using a pack of cards and some dice. Feel free to use your own spaceships from the third dimension.

4 Passenger by Zachariah Zark. A collaborative RPG where each player plays as a parasite controlling one part of a host body.

5 SPORTS MUTANTS by Noah Eadie. SPORTS but in your MIND.

6 The Witch Is Dead by Rowan, Rook and Decard (a London-based RPG company comprising of Mary Hamilton, Grant Howitt and Chris Taylor). Play as a cute woodland animal attempting to get bloody revenge on a Witch Hunter.

7 What Have You Done? RUN, NUN, RUN! By Matt Bear Jones. Players take on the roles of Nuns who have just committed a terrible crime. The Nuns know what they did, but none of the players do, yet…

8 Wreckdivers by Tim Barribeau. Dive deep and exploit the shipwrecks you find at the bottom of the ocean.

9 Islanders by Anna Blackwell. A solo or co-op game that is designed for playing on the beach using handy rocks. We’d suggest using something from the garden instead at this time.

10 The Holy Moutain by Elizabeth and Jay Iles. Play as a group of pilgrims visiting shrines on their holy walk. A constructed story-telling game.

11 Death in Venice by Côme Martin. A Venice partygoer refuses to die, and so makes a deal with death.

12 Secret Squirrels by Anna Blackwell. A competitive hunting game where teams of squirrels (you!) try and track down all your nuts.

13 The New Gods of Babel by Brian Molina. A world-building game that uses a Jenga tower to represent the precarity of our society.

14 Word Wars by Anna Blackwell. A word game for three or more friends.

Got some other free games you want us to shout about? Drop them in the comments below, or reach out on twitter or facebook.