THE BORDERS OF MIRKWOOD: Using the Wargames Atlantic figures in Oathmark 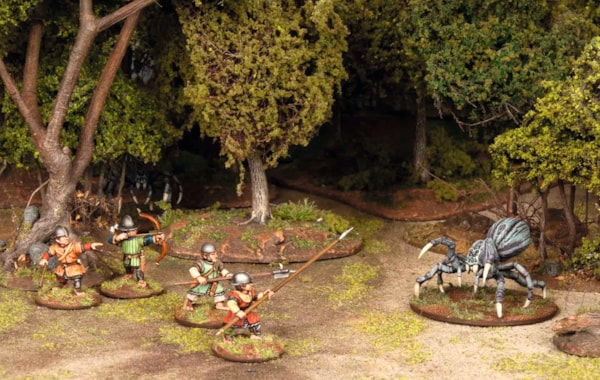 Words by The Editor Pictures by Wargames Atlantic

I wanted to create a small scenario using the Wargames Factory Halflings and I had to make some decisions regarding rules and setting. Since the last time we were under the infernal lockdown you might remember that Kevin Dallimore and myself built two Oathmark based Lord of the Rings armies: Elven, Dwarf and Human versus Orc and Goblin (and Warg) forces based in the Anduin river between the Misty mountains and Mirkwood sometime towards the end of the Third age (see Oathmark Express in issues 448 and 449). I speculated at the time that the forces could, perhaps be expanded both in terms of races and timescales.

On that basis I wanted to construct two further Oathmark forces using both the Halflings and an opponent and I wanted to make them somewhat usable in the LotR setting I had already had. So, I thought: why not a lost colony of Halflings that, perhaps, hadn’t gone west in the previous millennia and founded The Shire? They could be the halfling antecedents that, perhaps, were of the same tribe that Gollum’s people came from... Then, I thought, for some fun opponents, what about the Spiders of Mirkwood?

So with that starting point in mind I fished out my copy of the Oathmark rules and saw what was available. Looking at the Spiders first, there is actually a Giant Spider listed:

However, though I think that’d work well as a leader model, the regular ‘run-of-the-mill’ spiders would be  smaller and weaker, I fancied, and would be ideal for the smaller spider models that come in the Wargames Atlantic set (each box has 12 large and 12 small). These smaller ones could be:

They should, I figured, be less horrific than the larger Spider (I mean, horrible but no worse than a wolf) and significantly less powerful but available to use in en masse. Their Terrain should be the Forest.

But what about the Halflings? I think they could best be used as Goblins. Page 131 to 133 in the rules lists a Soldier, Spearman, Archer, Slave and Slave Slinger. All but the latter two are light armour and are armed appropriately and – if we remove the word ‘Slave’ and instead insert ‘Towns folk’ then I think they can be used as Halflings with no real changes. For example, we get:

I have actually given the Halfling Slinger a slightly better shooting ability than their Goblin comparators (a 1 as opposed to 0) as the Halfings are so good with this sort of weapon.

You could use the same Captain stats for their commanders as a Goblin Captain or Champion. Their Terrain would be a Halfling Village.

I haven’t room here for my scenario ideas in any detail but some form of skirmish in a wooded area springs to mind: either a Spider attack on a Halfling village; or perhaps a Halfling raid on a wooded Spider enclave to recover some of the already wrapped-in-spider-web bodies (or ‘lunch’) that you get in the Wargames Atlantic boxed set: there are a lot of options, I think!