ATLANTIC PURVEYOR: Who are Wargames Atlantic? 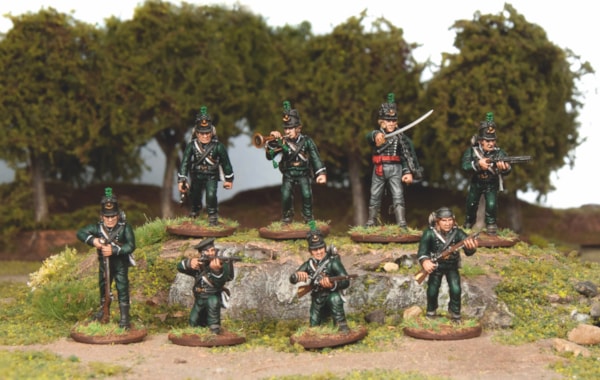 An interview with Hudson Adams, Company President by The Editor John Treadaway

Hudson, tell me a bit about the company: how long have you been operating? 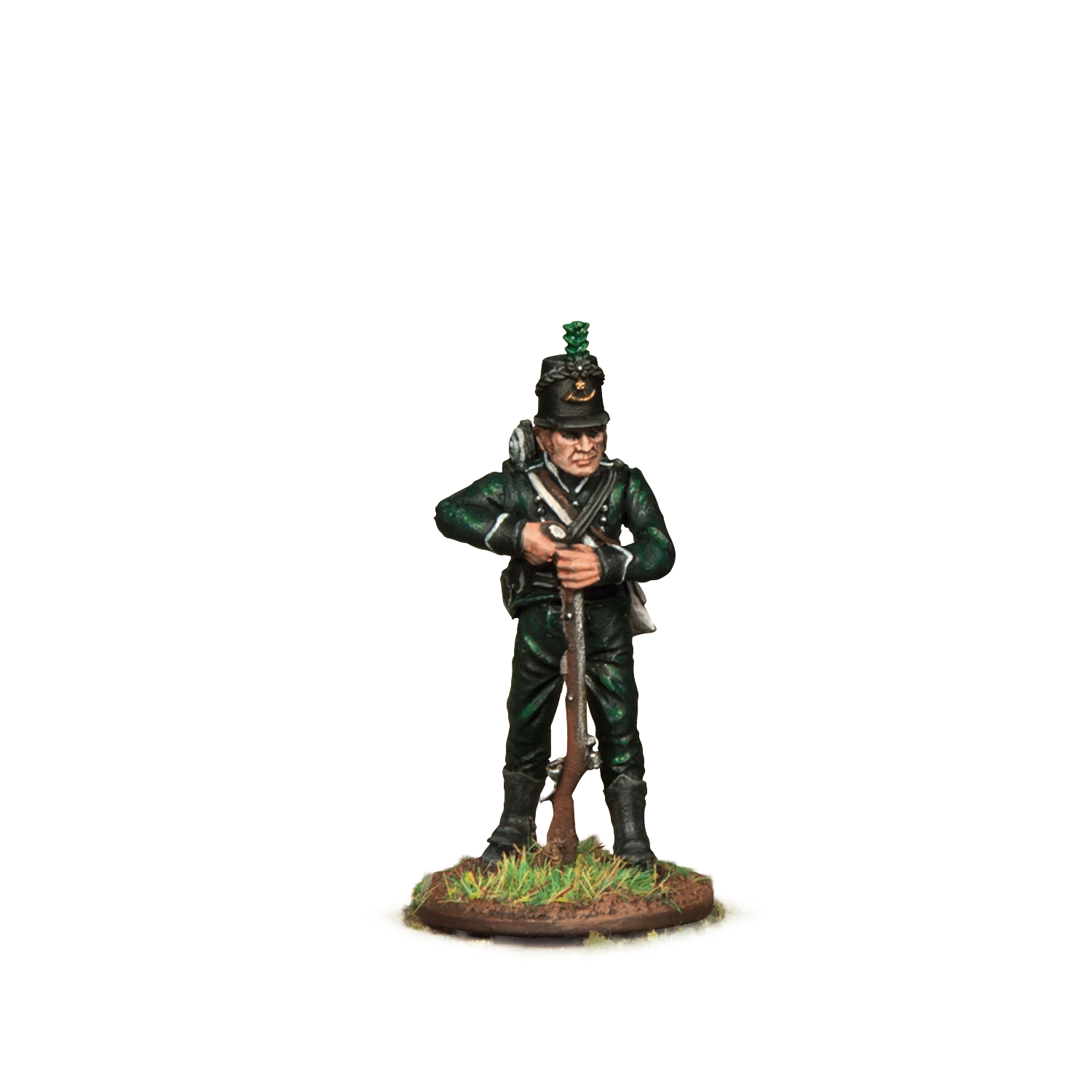 The idea for the company came about several years ago. I saw so many new companies coming out with 28mm hard plastic kits but the majority of historical periods and sci-fi and fantasy subjects weren’t being covered. I wanted to create a company that could fill in those gaps but also bring plastic kits to new historical periods and subjects and hopefully have lots and lots of releases. I then spent a quite long time researching how to produce plastic model kits! After a lot of trial and error and going down the wrong path many times, I figured out the process and launched the company with two projects. The Raumjäger were the first set for the Death Fields sci-fi range (which now has four sets and a couple more on the way) and the other was the Skeleton Infantry which was the first in our Classic Fantasy range. Halflings and the Giant Spiders have followed. Our fourth set for that range will be out early in 2021 – Lizardmen! Like the Giant Spiders the Lizardmen are a cross-genre set incorporating not only fantasy but sci-fi and even Victorian Science Fiction weapons so they can be used in quite a few different games.

The first sci-fi and fantasy releases were followed by four historical sets in 2020: Ancient Persians, Dark Age Irish, Afghan Warriors, and Great War Germans (the first hard plastic set ever done for WWI, as far as I know!) Each of these established a range that we will be filling out with more releases over time.

Are all of your models digitally sculpted? 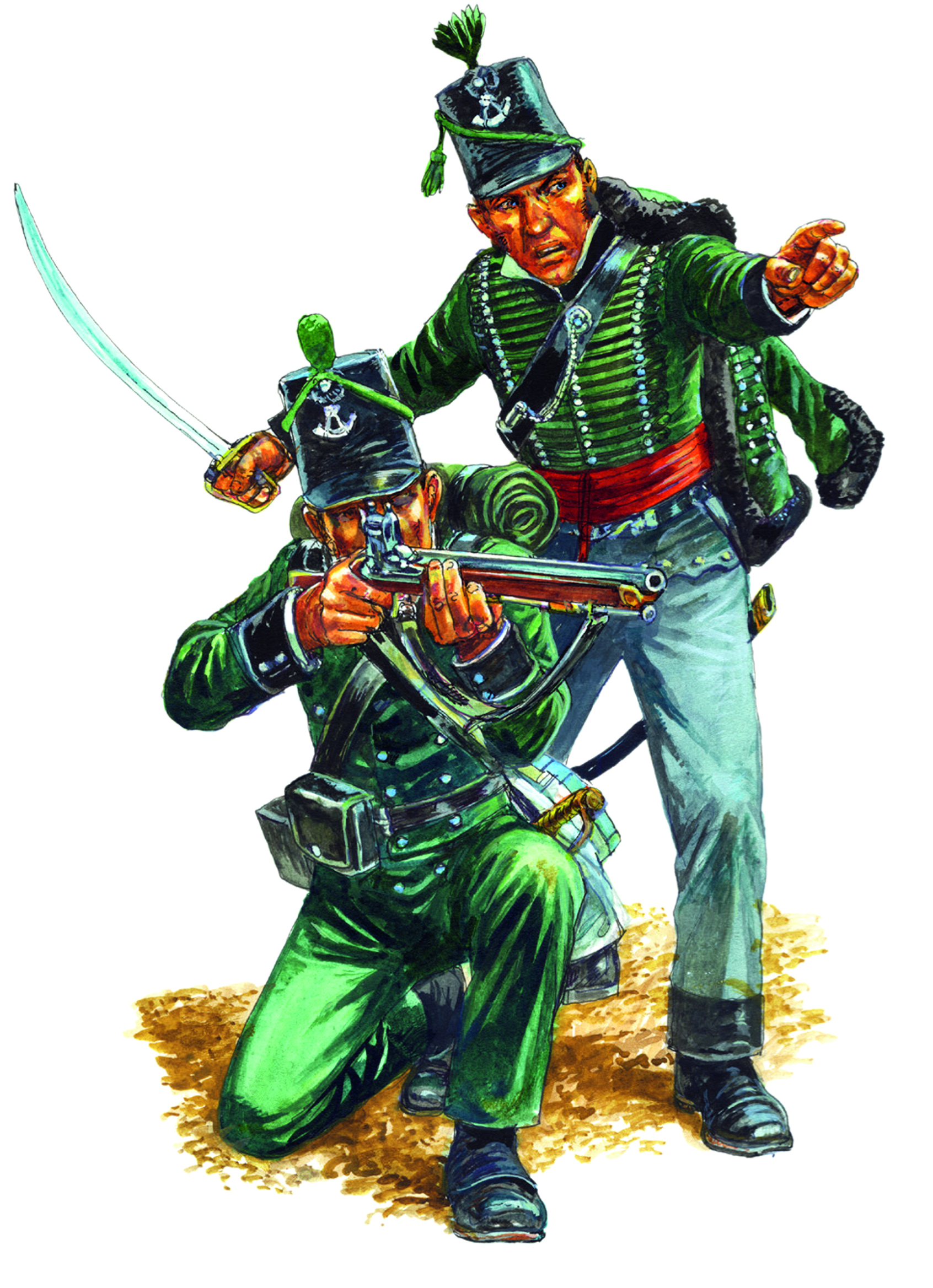 Yes we are all digital although we can use physical sculpts as well: they just have to be 3D scanned. By the time you get through with all the scanning and fixing of files it’s just easier to start and end in a digital environment. Sculpting is sculpting. We also work with some other traditional artists, namely illustrators Peter Dennis and Mark Stacey who do the artwork for our boxes. Although we even got Peter to try his hand at a digital painting for the Giant Spiders!

I see you have used a selection of sculptors for your different ranges. Why is that?

We go with the most talented sculptors we can find. And we always have so many projects on the go that we can’t rely on just a couple. We use freelancers and we are building a team of full time sculptors so that we can get more sets done.

You have a very wide range of miniature releases from historical to non-historical. Why such a broad sweep?

Our strategy is a little confusing to people because of two things. Firstly, it’s never been done this way before (at least in plastic) and – secondly – we’re such a young company that you’re only seeing the initial releases in our ranges. Our goals are to fill in gaps in existing plastic ranges and to establish new plastic ranges for historical periods (as we’re doing with WW1 and... well some other, of which more will be revealed soon but think Indian Mutiny and the Conquest of Mexico!). We will then go back and flesh out each of these ranges to become as complete as possible within the bounds of hard plastic sets. What I mean by this is that eventually the Afghans, for example, will have British opponents so that we can create the mythical “complete range” for each.

This is why we’ve been trying to streamline things so we can get more sets done faster and have monthly plastic releases in 2021. Covid of course has been a bit of a challenge on top of the normal growing pains of a new company but so hopefully we can start putting behind that mess later next year and get back to the shops, clubs, and shows.

Will you be employing other materials for miniature manufacture – resin or metal for example? 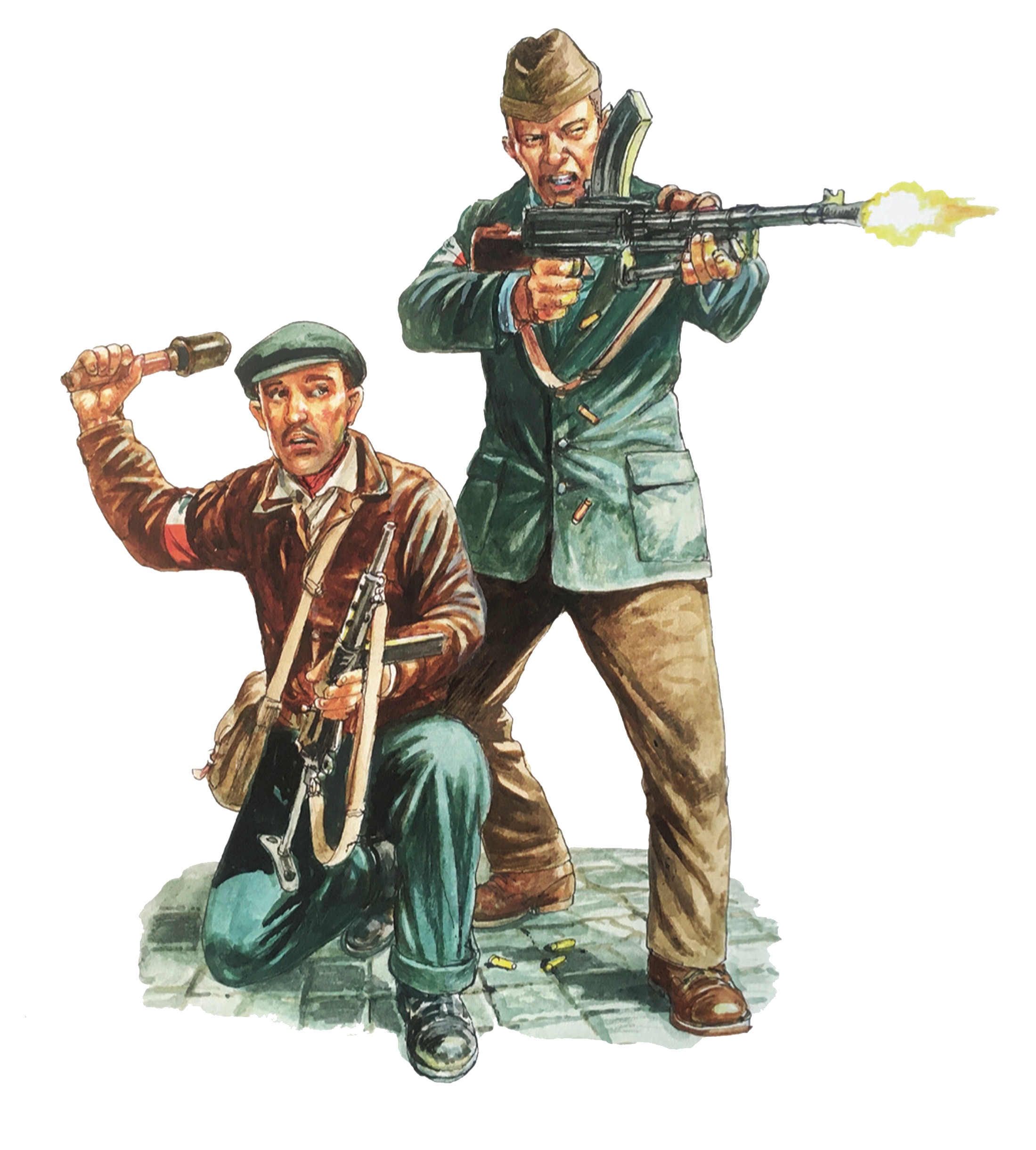 As the 2020 Great Wargaming Survey concluded, hard plastic is the material of choice for wargamers. Unfortunately it’s also the most expensive material to produce in because of the very high cost of the injection mould tooling! But I believe the benefits of the material far outweigh the costs and I don’t foresee ever using metal or resin or any of the so-called plastic resins or nylons like Siocast. They’re just not up to snuff. I have plenty of metal and resin figures in my own armies, but for Wargames Atlantic I want to keep true to hard plastic.

Will you be authoring rule sets for any of your figures? The Death Fields range, for example?

Yes we are planning rules for some of our ranges and also working with some other companies on some joint ventures and licensed games. This is all very early days on these although we already have one success with the great guys at Footsore and their fabulous Mortal Gods game.

Will you be expanding into other areas? Scenery, perhaps?

We have nothing planned at the moment for either scenery or 28mm vehicles (which both tend to need larger moulds and more plastic frames to do justice to). That may change as we grow. Right now we want to focus on superb hard plastic infantry and cavalry sets. 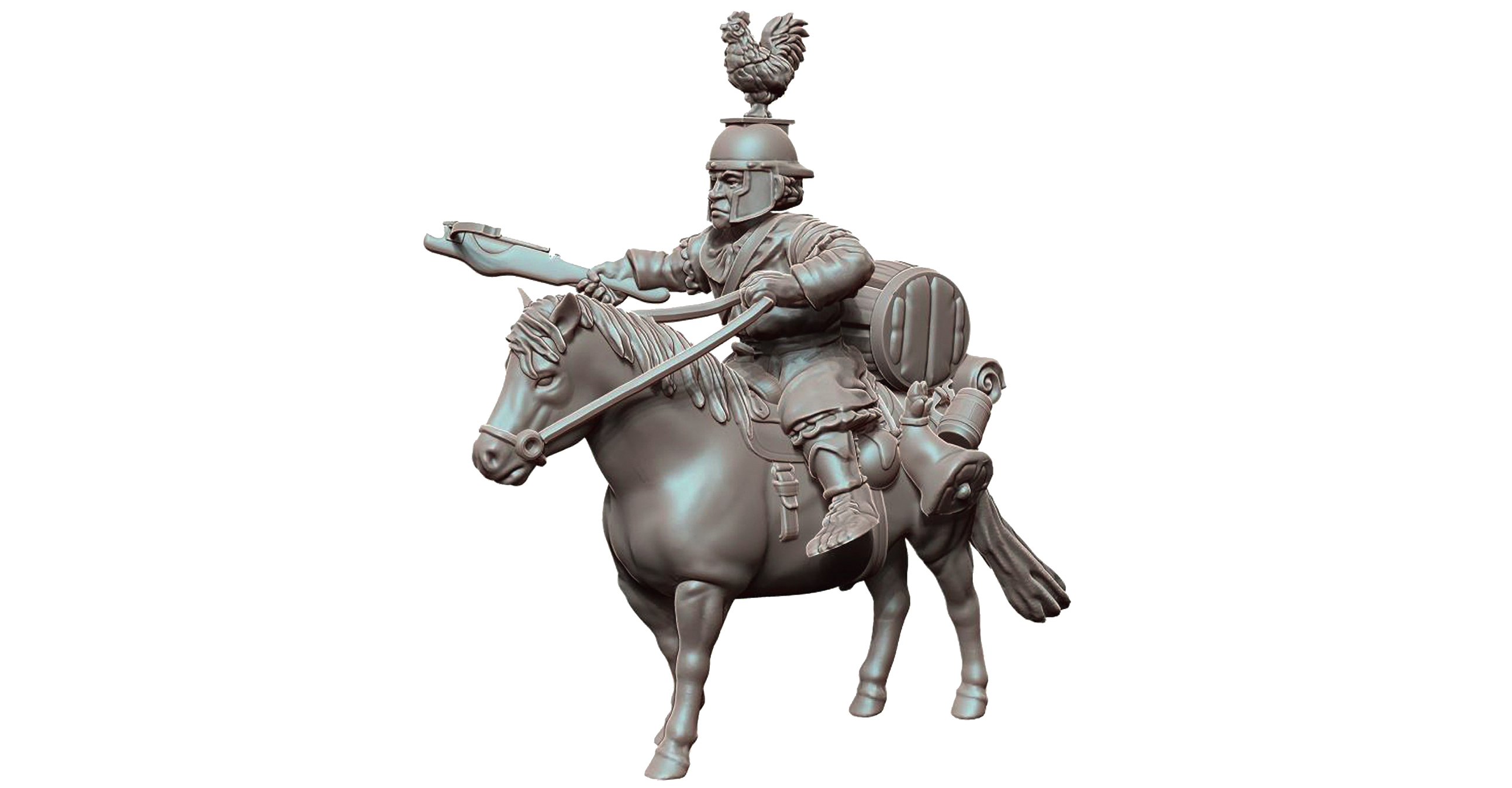 What guides your sprue component selection? That’s a polite way of asking why there’s a chicken on the Halfling sprue and why so many War Dogs on the Irish Warriors!

Ah yes it’s a balancing act! We start with an end in mind and a parts list that doesn’t always survive it’s meet with the “enemy” (those pesky frame layout engineers!). This has all been very much a ‘learn as you go’ experience. Invariably, as one set is moulded, there are six things I immediately want to change. If I was an eccentric billionaire I’d probably go back and redo some of them just for me!

But yes the main thing is figuring out what to fit in the space you have to work with and then making sure that the combination of parts (and the multiples of those parts on the various sprues in the box) work together to give a great set. It can be agonizing making a choice between this or that head or that arm type or this arm type. Can we get away with only three shields for four figures? Well that one can be a bowman so... Yes many, many hard choices. 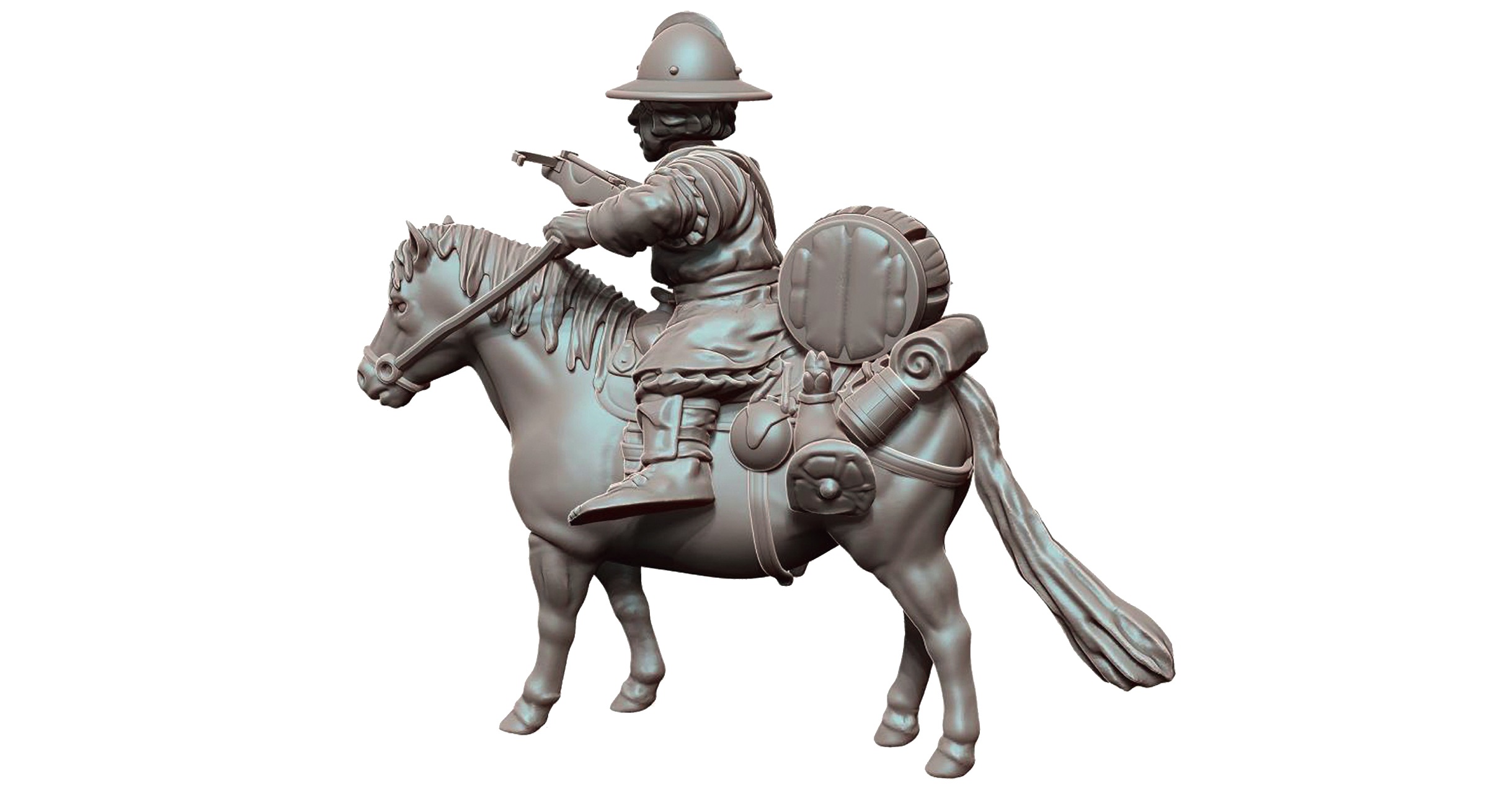 To answer your specific question. The chicken is actually not a living chicken but a standard top (or in some cases a great topper for the great helm in the set). I always knew I wanted to make “serious” halflings and get away from the silly pot-bellied, pot-wearing types or the ones riding giant chickens! But as a nod to those we included the chicken and the frying pan. I try to come up with little fun things if there is room. You’ll notice the upcoming Death Fields Les Grognards Command and Heavy Support sprue features a wine glass and wine bottle to keep the Grognards well-hydrated on the fields of death. 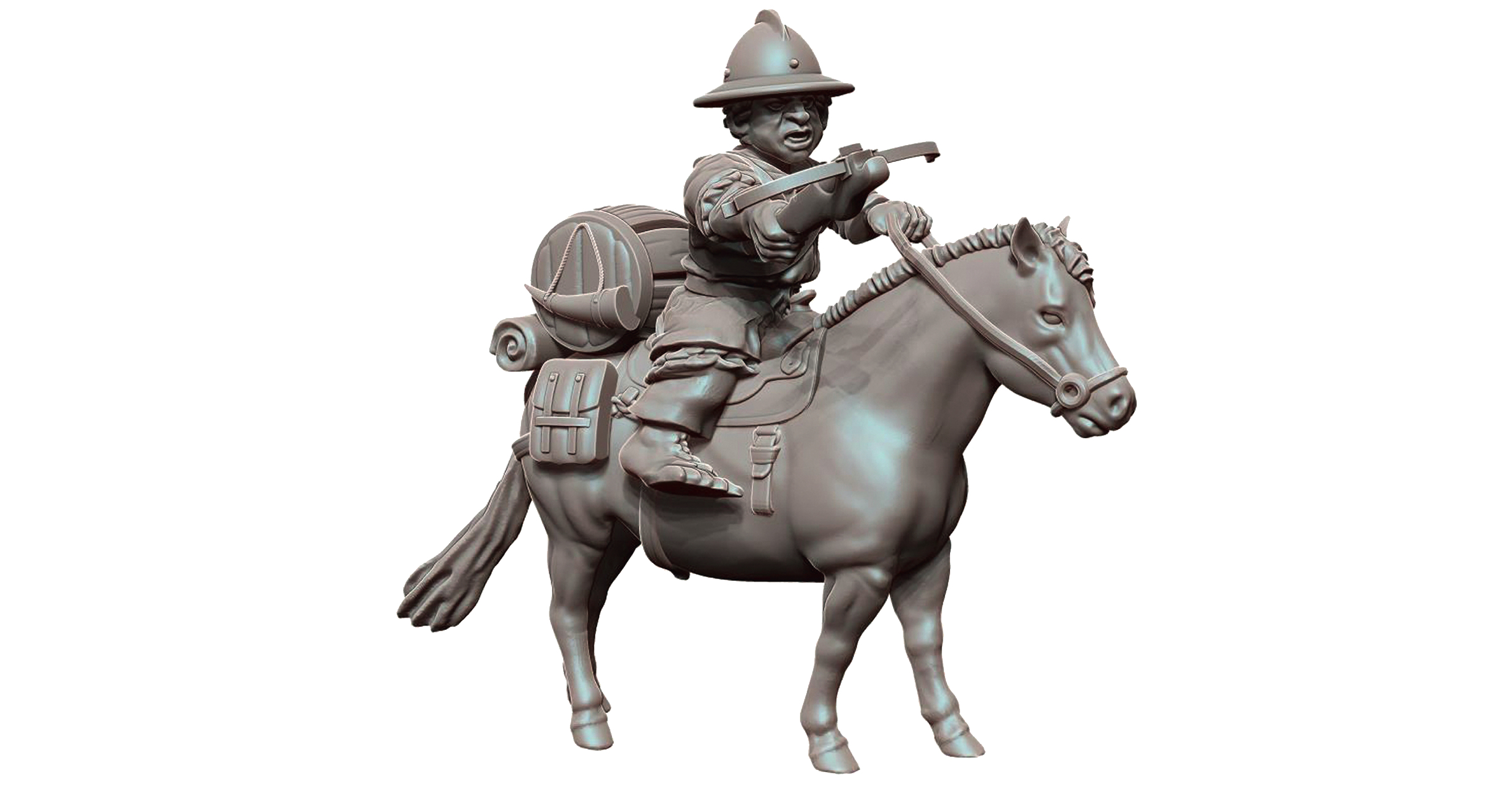 What’s coming up soon? I understand there’s Halfling Cavalry in the pipeline but... what else can we tempt the readership with?

As you read this the Grognard Command and Heavy Support and the Eisenkern are probably out in stores or about to be. The French Resistance, two unannounced Napoleonic sets, and the Lizardmen will be out in January/February 2021 depending on the sailing schedules. Coming on their heels are the WWI French, the Panzerjägers for Iron-Core, the
“Space Brits” for Death Fields, and a slew of historical sets including some Napoleonic British Rifles that fill in existing ranges and start new ones! 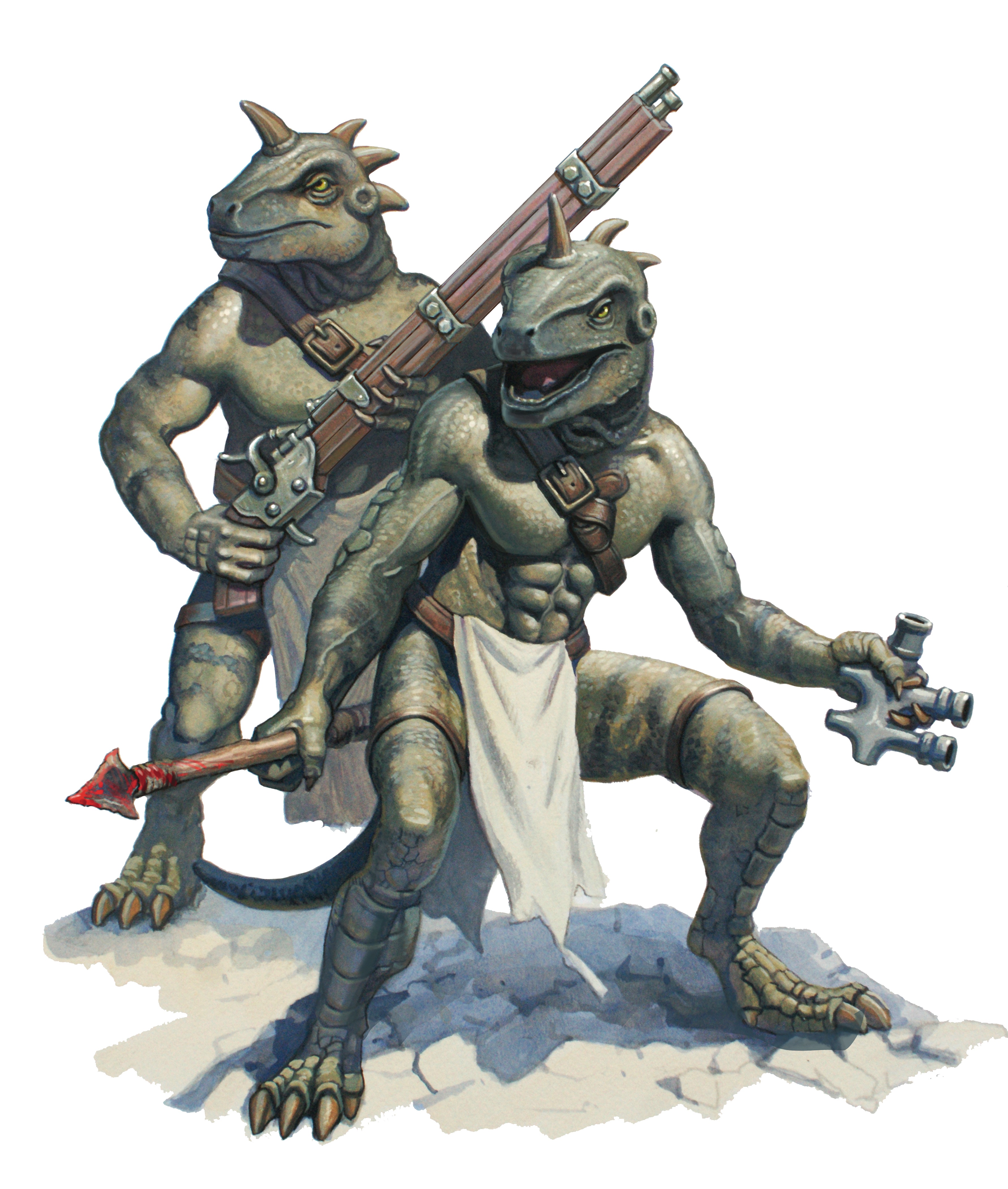 What are your longer terms goals as a company?

Well, we have Mark Mondragon of Dream-forge Games resculpting his wonderful Iron-Core sci-fi infantry which we are tooling and bringing out. The first set, the Eisenkern Stormtroopers, are being released right now and will be followed with the Panzerjägers and Valkir and Protectorate troops in 2021.

But the short answer is more plastic sets and more ranges! As of the end of the 2020 we'll have 12 sets out with (hopefully) those four more in January and then monthly releases in 2021. We do want to surprise and delight the wargames community with a steady stream of great kits. Eventually we’ll have some rules to help move those kits around the table but – beyond that – the undiscovered country is still, well, undiscovered!