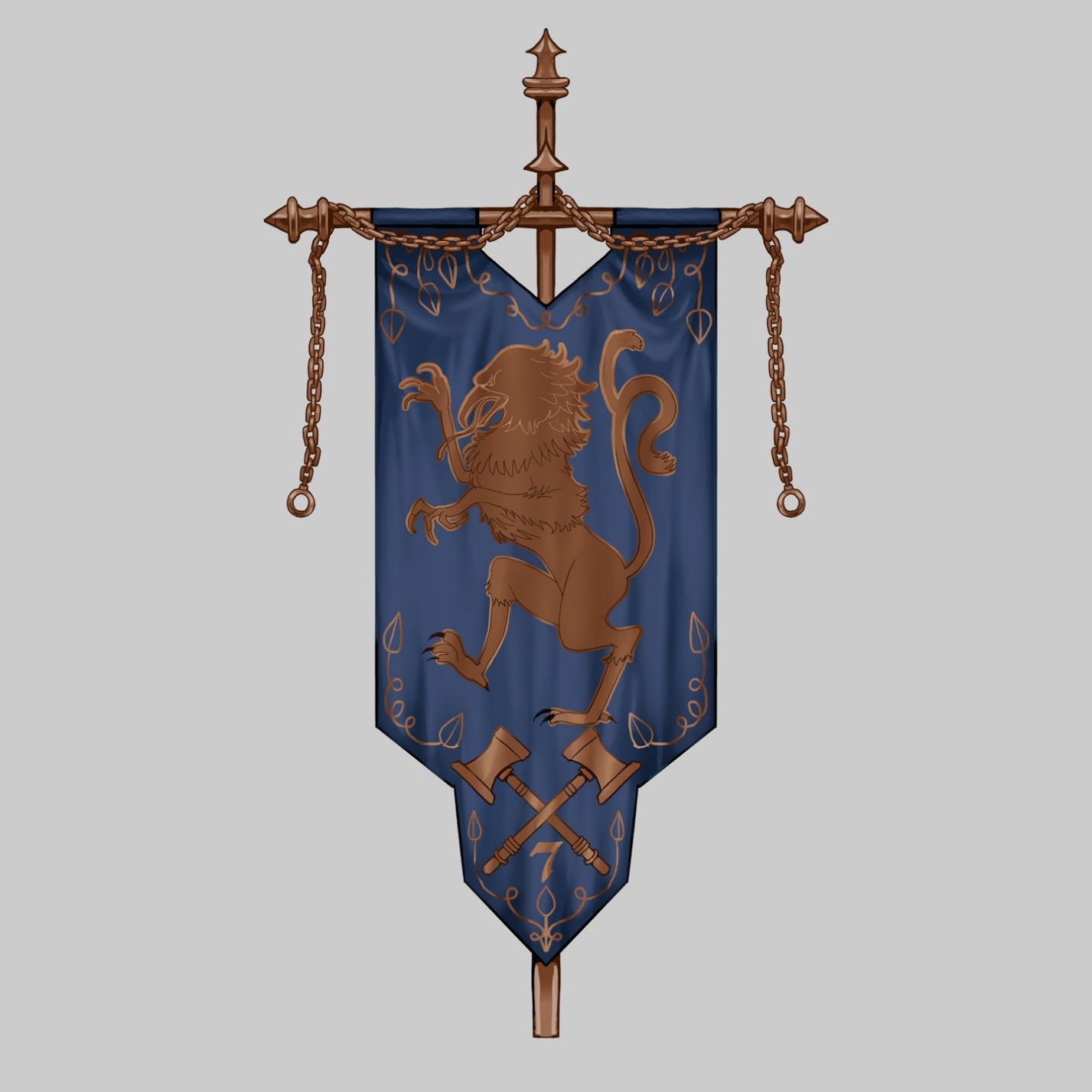 Who is 7th Corps?

The origins of 7th Corp are far more recent than the other major influencers of the Tu’x Rebellion. King Ticondrious Xavier authorized the creation of the 7th Corps. The King surprised the nobility and the loyalist Tu’x when he chose to install as its commander the loyal Tu'x Kohath.

This choice was illegal by the millennia old covenant signed voluntarily by the immigrants to the island after magic powers began to appear among them. The immigrants adopted the word Tu’x for these magical individuals.  Many kinds of fears erupted from the immigrants that these new powers would disrupt the vision of the society they had come to start for themselves and their children.  The hastily constructed covenant to address these many fears and maintain their hoped-for society sadly contained many injustices too numerous to detail here.  In particular though were two rights surrendered by the Tux: one to hold title or military rank and second to establish a Tu’x lineage through raising their own Tu’x children.  Usually time would have brought these injustices into perspective for everyone. The same power that gave some immigrants magic caused every person’s lifespan to lengthen significantly in the successive generation of their children. With the perspective of a long life some Tu’x looked back on the sacrifices the Tu’x made for the covenant and count it a short while ago. Other Tu’x looked forward in their long lives and counted the sacrifices as made for an eternity.

The King officially ignored the covenant, created the 7th Corps and appointed Kohath as its General. The immediate effect was to rally the remaining loyalist Tu’x to the King’s banner. Although the heads of some noble houses voiced their opposition behind closed doors, Kohath’s work to serve others with his magic and his proven track record of civilian leadership prior to the war’s outbreak silenced their objections for a time. To alleviate the fears of the loyalist nobles, the Corps was designated as a reserve Corps.  Units that were understrength from fighting, too green, or due for reserve duty were assigned to the 7th Corps then later reassigned as circumstances changed. The acceptance of this status quo for the 7th Corps as a reserve Corps lasted for years.

Kohath proved he was a formidable warrior.  He had shown great abilities in military leadership, reorganizing units, and fighting above his Corps perceived ability. Good leadership, a high mission completion rate and a few battlefield victories gave the Corps a good reputation among the loyalist troops.

While on a reserve mission, Kohath found a lone surviving baby on a field of devastation.  Kohath named the baby Kiith and raised him in the 7th Corp. Kiith rose through the ranks of the Corp from fighter to officer to logistics leader to brilliant tactician. He started to train these fractured units into a combined arm’s force, taking the strength of each house and combining them on a company level to make a greater whole. This led to some surprising and crushing victories while the 7th Corps were taking on much larger rebel armies who were used to fighting against the tactics of one house at a time.  As a result, newly formed regiments and veterans alike from many established noble houses were seeking to serve in 7th Corps under Kiith’s leadership and the command of his adopted father Kohath, the first Tu’x General. The King declared that 7th Corp should now be considered a fighting Corp.

The heads of the noble houses voiced their objections to the King’s declaration behind closed doors again. The King negotiated to put off addressing the twin issues of a Tu’x General and a Tu’x parenting by granting them their requested assurances.  King Xavier believed he understood some of reasons why some of Tu’x rebelled.  The rebels had not lodged their complaint in court or posted a written complaint on the palace door. Instead, they made their complaint in the blood of his people, including their own, on the battlefield. The King felt more eloquent on the battlefield. He would make his own plea to reunify their society. The rebels had recently found a way to attack from the North of the Island and the 7th Corp would be his opening plea on this new battlefield.

Strengths: 7th Corp has solid Tier 1 troop selection in every category, these same units actually get stronger in Tier 2. The Tier 2 unit selection may be fewer but still boast on average better troops than core. In Tier 3, 7th Corps gets some of the best infantry in the game, along with, solid range and cavalry choices.

Weakness: With no access to core troops forcing, 7th Corps to only buy the much more expensive faction troops, loses can be a serious setback. 7th Corps is also limited by how many troops they can train in a single turn due to high recruitment cost. This house is also ability heavy which can slow the player down.

House Trait: Lilian’s Grace: Player can once per round announce one positive external or internal event and then take it out of the respective deck, Shuffle the full event deck after.

Why is there no art?
To finish all the art for this house would cost near 4500$ which I don’t have. This is why I am going to Kickstarter

In tier one, players have access to one Infantry, one Ranged, one Cavalry, and one Tu’x unit.
Militia Sword: This unit has some of the best attack and defense stats in tier 1. ‘Parry’ allows the unit to further increase its defenses for a single enemy attack. ‘Spear Throw’ allows the unit to act outside its normal phase and do surprise damage to enemy units. ‘Sprint’ comes in tier 2 allowing the unit to potentially punch far beyond what other tier 1 units can.

Militia Bows: This unit has solid stats for tier 1 and can survive what would kill other ranged units. ‘Parry’ is also available on this unit like the Militia swords. ‘Formation Castle’ will allow the unit to combine with the militia sword to make a larger and stronger whole. It is a lighter preview of House Lotan’s epic tier 3 ability. ‘Double attack’ allows the unit to increase its damage output for a single attack.

Militia Cavalry: This unit is one of the hardiest calvary available in tier 1. ‘Quick’ allows the unit to make a single irreducible attack to an enemy unit. This unit also benefits from ‘Parry’ which upgrades to ‘Parry +1’ at tier 2 allowing it to increase its staying power. ‘Barding Armor’ allows to unit, at tier 2, to further increase its armor against ranged and infantry attacks.

Nalani’s Healers: This unit is capable of healing allied unit’s mid-battle. ‘Nalani’s Healers’ allows the unit to restore troop strength of allied units during battle, this ability only grows stronger in tier 2.(edited)

In tier two, players gain access to two Infantry and one Ranged unit

Iron Company: This unit has some of the best baseline stats in tier 2. Sterner Stuff allows the unit to increase its survivability for a single attack per battle round.

Kohath’s Sword-Staves: This unit has some impressive magical attacks. ‘Kel Fiery Retaliation’ allows the unit to do 1 point of irreducible damage any enemy that attempts to attack them. ‘Kel into the fire’ allows the unit to increase the damage output of higher attack value cards. Spearwall +1 allows the unit to have increased damage against enemy cavalry units.

In tier three, players gain access to two Infantry, one Ranged unit, and one Cavalry unit

Diego’s Chargers: This unit has a devastating high attack for cavalry. ‘Quick’ allows the unit to make a single irreducible attack to an enemy unit. ‘Reinforcements’ allows the unit to regain lost troop strength. ‘Barding Armor’ allows to unit to further increase its armor against ranged and infantry attacks. ‘Disengage’ allows the unit to ignore incoming attacks and move outside the normal movement phase.