There’s something strange in this neighbourhood…

Antonio Ferrara has a knack for mashing together themes and mechanics. Last Friday was an ode to the slasher genre with hidden movement and deduction in what was a particularly brutal version of hide and seek. Here, in Tales of Evil, we have something aimed a little younger – think Stranger Things and Scooby Doo, rather than Friday The 13th.

Players pick up the role of young people, and in one case their kid sister, roaming through spooky scenarios attempting to not only get out unspooked and alive, but also to carry out investigations and missions within the ghost-ridden modular houses they explore.

The game sets up a series of modular boards that players can creep through with each room usually containing some kind of event or investigation token. These lead to drawing items from the various decks to improve your supplies, or for something paranormal to happen. And then there’s the exceptionally well written story book. It’s rare that something that comes inside a board game box is this funny. Although, I suppose we should have known as the game box is glow in the dark.

The story book is what really guides players through the game, prompting movement, action and choices. Players will be asked which way they want to lead their investigation, which can either send players to another section of the adventure book, or indeed, trigger one of the many interesting mechanics in the game.

The most amusing of these is the ‘Fusion’ mechanic – and this is where it all gets a bit meta. When ‘Fusion’ appears a timer is flipped and a challenge is laid down by the game, not for your characters, but for you, the people sitting around the table. In the tutorial scenario (to avoid huge spoilers) this is used to great effect when a player is asked to remove their shoes to help the character in the game do the same. This is so as to not get the character’s shoes wet. Whether this adds immersion to the game and the setting is a question to ponder, but then our characters went back into the house and when those of us shoeless around the table took damage for stepping on broken glass we couldn’t help but laugh.

It’s these kind of tricks and minor moments of invention which make the game a full experience. Sometimes you’ll be asked to draw straws using match token props, other times you’ll spend a card from your hand to just not do something – a kind of ‘sulk your way out of this situation’ action. It’s all very silly but hard not to enjoy, you’re going on an adventure in a game and you really don’t know what’s going to be asked of you next.

The main downside of Tales of Evil is the combat is mostly dice-chucking and not as much fun as the rest of the exploration and running around the house looking for a specific kind of spoon.

For those looking for a game that will let them fall in love with it, who don’t mind that love coming from theme and mechanics tumbling over one another, Tales of Evil is just what you’ve been waiting for.

More than the sum of its parts, Tales of Evil mixes disparate mechanics, a little bit of silliness, and a whole lot of heart into a messy but fun family adventure game.

The Michael Menzel classic is a good way to get into adventuring, without quite as many gimmicks. 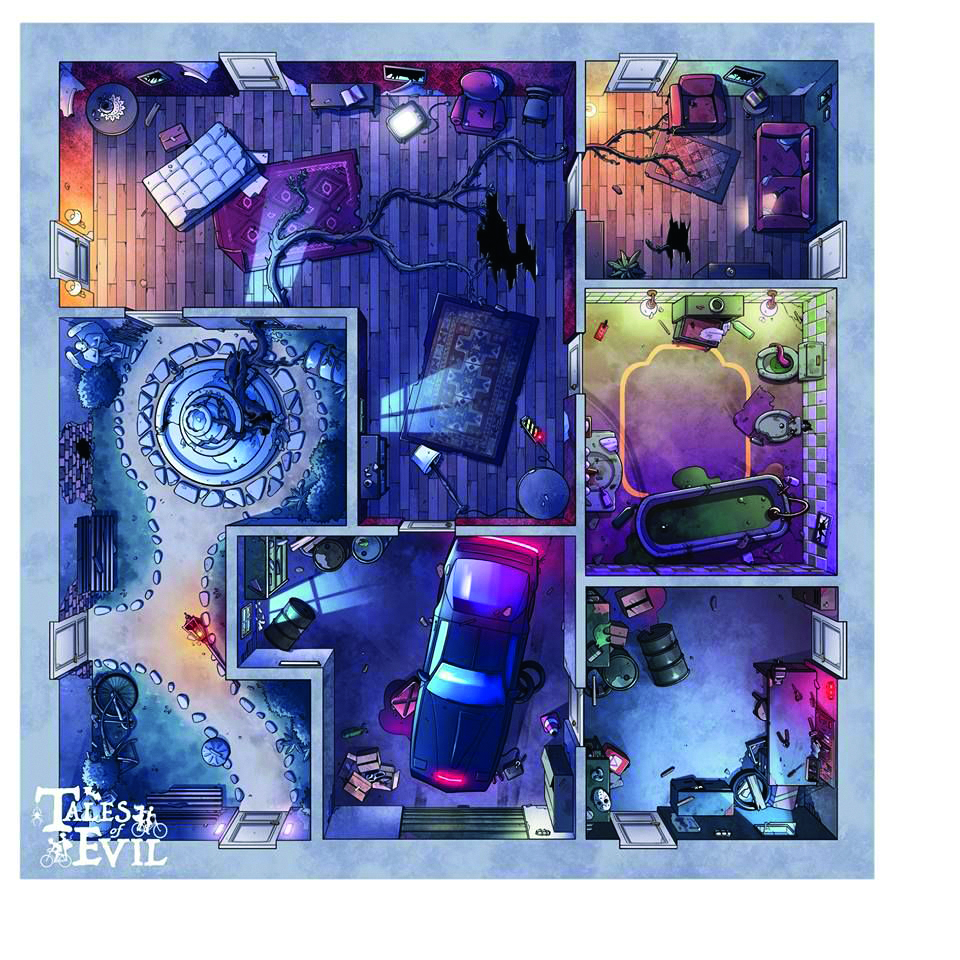