We’ve all been there. You’ve moved in with someone and found that their tastes are, suddenly, and inexplicably, wildly incompatible with yours. You try and make it work and hold your tongue, but when they bring in the final yak-fleece beanbag, a noise of displeasure escapes you that gives the game away. Not enough to bring anything to a head of course. And anyway, they seemed really put off by your collection of antique chrome lamps in the shape of famous butts from history. Don’t they know that the Stalin buttock angle-poise lamp is considered a ground-breaking design piece?

Décorum is a game of communicating how you feel, but not why. Players take a card with their agendas on it, and take turns adding, replacing, or removing items from the house in the hope of becoming satisfied with the way it looks. You only win the game when both players are satisfied entirely. Easy enough right? Well, no. Players can only react to other’s reactions with a positive (“I love it!”), negative (“It makes me want to vomit!”), or neutral (“meh!”). Each item has a colour and style (except walls, which are just colours), and players might have instructions like “the downstairs must have no lamps” or “the upstairs must contain only warm colours”. Another player might have instruction to “include one of each green item” (a cold colour). This would lead to passive aggressive back-and-forth actions of adding and removing certain items. Even better is when you think you ‘get it’ and do something to ‘help’ another player – only to find that met with a cry of “oh no, you’ve made things so much worse”. 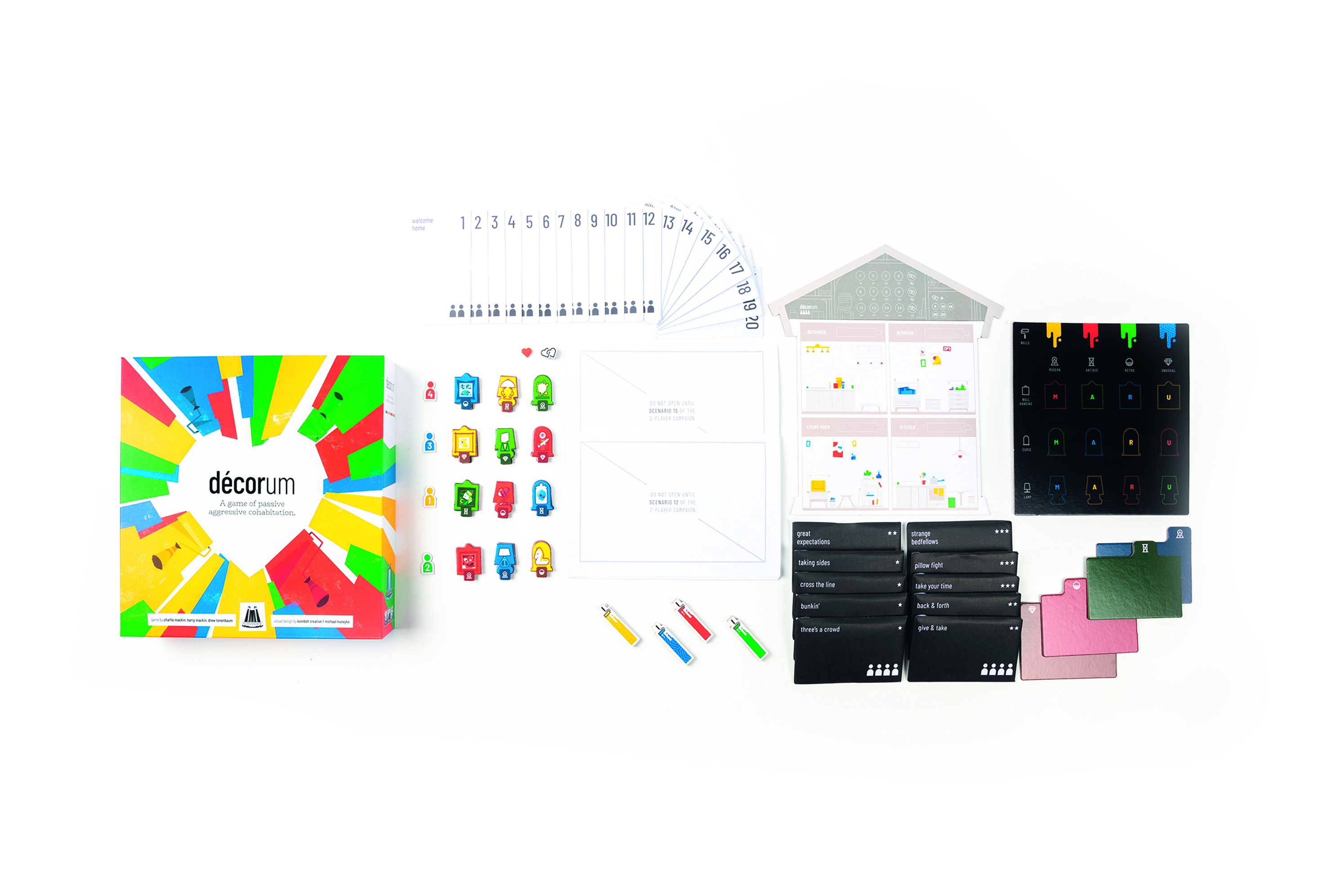 Luckily heart-to-hearts turn up, and you can share one of your requirements with another player (with little cards to pass over secretly in the 3-4 player mode). This will give you a chance to understand each other a little better. Or, more than likely, make a grave error that conflicts with one of the un-shared requirements.

As a two player game it’s incredible. It might be our new favourite ‘take to a couple’s house’ game – as the joy of having people who have actually dealt with the deciding-on-curtains issue have to play out passive-aggressive comments with one another is hilarious. The two-player campaign also has a great deal of amusing writing around it, giving each player a name and a bit of motivation. It’s genuinely chuckle-worthy. The 3-4 player game is stripped of this, which is a shame. Additionally, the huge complexity spike of a bigger game is just slightly too much to remember – although, because you only share information with one person at the house meeting, the factions that form become their own source of entertainment. Our preference was, in the end, to trade off shorter two player games around the table.

While imperfect at larger numbers, Décorum straddles that line of a party game and something meatier. It generates, almost effortlessly, a world of snarky-but-amusing comments from people who are (assumedly) dedicated to the death on having a green wall hanging in the bedroom. While we’re not sure this would work as quickly with groups not familiar with one another in the way it worked with old friends, the two player campaign’s charm would probably win everyone around. An excellent game of living in disharmony. Plus, the upcoming smartphone app will give us unlimited scenarios to play through.

Décorum is a roommate worth having, even if they get a bit stressed out at parties. Perfect for those who want to laugh their way through some cutting comments about their new lamp.

TRY THIS IF YOU LIKED Mysterium…

… but if the ghost was the spirit of an argument about to break out between two newly-weds. Keep the hidden information, drop the wordplay, and sharpen your tongue instead.

Read our Have you Played? feature on Mysterium by clicking here