Have You Played? Mysterium No one anticipates dying in mysterious circumstances, nor being stuck in Mysterium Manor in ghost form until you can be freed by a séance of mediums, but that’s where you stand with Mysterium

I’m sure most of us can remember pouring hours into Cluedo with family members, only to put it on the shelf one day and – despite fond memories – probably never pick it up again. Mysterium invokes that same sense of mystery as your nostalgia for Cluedo, except now you’re arguing with your fellow players over a murder’s location, weapon, and killer to uncover the correct circumstances, based on abstract clues from a forgetful ghost played by your teammate.

It sounds like a stretch, but it really isn’t. There’s great fun in playing detective, solving the clues based on your own intuition and investigation, and both are split into components, building up little victories into an overall win. The big difference is that you play cooperatively with your fellow players – though you may not agree with them, but that’s up to you to argue your case – and Mysterium specialises in the abstract clues rather than process of elimination. After all, solving a murder is no easy task.

Mysterium Manor has been struck over the years with a number of murders in mysterious and unsolved circumstances, and as such there are a number of ghosts trapped there until the truth can be revealed. You’ll play as either a ghost, or as a medium who has been invited to the manor for a séance in an attempt to uncover the truth.

As a medium, you’ll aim to progress through the game board by correctly guessing the circumstances of the murder. Each medium will have a different set of circumstances, but you’ll work together to climb the board, and it’s only in the final round you’ll try to uncover which of these circumstances is for the murder of your ghost in a blind vote based on cards, with the number of cards dependent proving your own clairvoyancy in guessing who is right throughout game. If the majority guesses correctly, you’ve won! Only, of course, it’s not as simple as it sounds.

That’s because the player assuming the role of the ghost has become muddled and forgetful over the years, and may now only communicate with you through ‘vision’ cards. These are cards dished out by the ghost depicting abstract art pieces that can be used to give a clue as to the circumstances of their demise. Guess correctly, and you’ll move to the next area.

These might be straightforward – a series of cards all containing some form of travel, might apply to the murderer card that shows him to be a cartographer, and you’ll place your token on this one for this round. However, ghosts only hold a limited number of cards at any time, so the reasoning may stretch as the cards are more difficult, making it more difficult for the medium to guess. You and your fellow mediums may be searching for a deeper meaning, when the ghost merely thought the colour scheme matched. 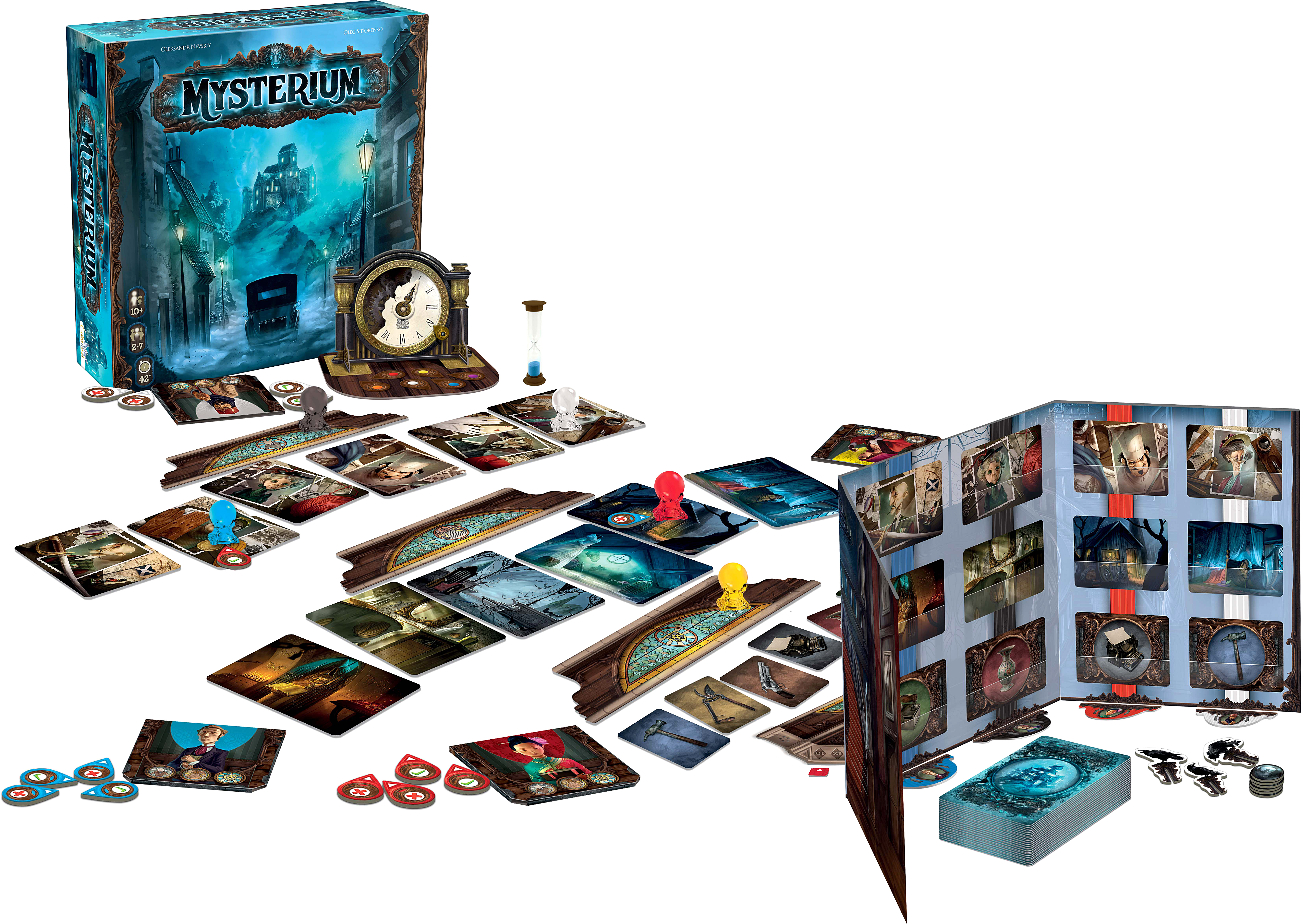 The game is like Cluedo meets Dixit from beyond the grave, but with enviable artwork and high tension… and it’ll test how well you know your fellow mediums, as well as the ghost. You’ll need to debate what the ghost player meant, and you’ll quickly learn to anticipate how the ghost thinks, rather than what might make initial sense.

One player may see the book in the vision, and immediately think the ghost means the library. On the other hand, another player might remember that the ghost players favourite book is Great Expectations, and believe they will have played this card in reference to the attic, because in it is what looks like a wedding dress Mrs Havisham could have worn. Then you’ll wonder if the ghost had thought ahead and assumed you wouldn’t know that link, so it should just be the library… when in fact, the ghost chanced their luck that you’d simply guess correctly and there was no prior thought at all.

The reasoning gets more ludicrous as the game goes on, and this is no simple ‘the dagger in the kitchen with Professor Plum.’ You’ll find yourself laughing at the nonsense you and your fellow players are trying to justify as the web gets more tangled. These discussions, for the ghost player, are both amusing and frustrating. The ghost is responsible for bringing the players through the game, and sometimes might briefly feel out of sorts that the players are completely missing the link they thought was really clear… only to find the player used a reasoning they hadn’t thought of to get the right answer anyway. The game refers to this phenomenon as ‘inspired guesswork’, which is particularly accurate. Satisfaction all round, whether you intended the connection or not.

It’s certainly a game that gives you a boost as it feels like each nonsense reasoning could be as valid as the other, and you’ll progress quite quickly through the board. Each stage, each correct guess, each correct clairvoyance bet, feels like a victory in itself, all the way up to your final guess. Ultimately you have eight rounds for all players to reach the final guess, but surprisingly often this is more than enough. You can still lose as a group for a player failing to get there, or for getting the final clue wrong, but that just encourages wider discussion to help them do so. It’s a team game, no matter how long the debate wages for.

Finally, a great bonus to this game is the vision cards alone. These have changed from its original printing to the version available today, to some gorgeous (though somewhat bizarre) abstract drawings. They’re just rational enough to make regular links (so you may use a card containing food to denote a chef), but abstract enough to cause debate as to what they link to. A personal favourite is the open umbrella hanging from the moon and raining into the sea. It’s a tricky card to use for a clue for pretty much every option available, so it’s always contentious (and therefore amusing) to see it played.

Mysterium then does a great job of testing how well you know your friends intentions, how well you can read essentially a Rorschach test on their behalf, and forces you to communicate your thoughts back and forward. It feeds on that feeling of wanting to know the truth and being responsible for the outcome. It’s maybe too long a game to play and understand to be described as a party game, but it remains a great one to share with friends.

This Have You Played Feature originally appeared in Issue 43 of Tabletop Gaming. Pick up the latest issue of the UK's fastest-growing gaming magazine in print or digital here or subscribe to make sure you never miss another issue.