The Batman Who Laughs Rising Launches 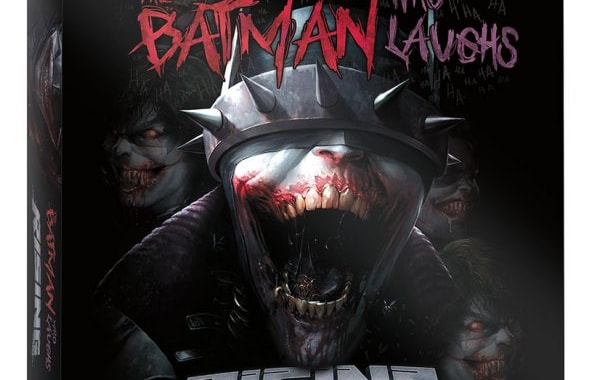 Wanna know how I got these board games?

Whether you’re DC or Marvel fan, there’s almost always a little bit of respect for the Batman series, in our favourite caped crusader Bruce Wayne. If you’ve only seen the films, you may have missed the dark underbelly multiverse, the latter allowing characters from different comics to exist in the same universe, the former the more evil and gritty versions of characters let out to play

The Batman Who Laughs is such a character, an irreversible fusion of Batman and the Joker, causing him to lose all ethics, and gain psychopathy. You can see from the box cover, the image of this is terrifying, and the outcome brutal. Mixing a gruesome version of Batman with a board game? Fantastic.

That’s exactly what The Op have done, in The Batman Who Laughs Rising. Evildoers have invaded Gotham City, and you’ll need to save the multiverse. You’ll gain a custom full colour figure of The Batman Who Laughs, with his Evil Robins, but you’ll seek to gain allies in other villains such as Harley Quinn, as well as other Batman’s altered by the dark multiverse, including a cyborg Batman named The Murder Machine, and a Flash and Batman fusion called The Red Death.

Opposing them will be Wonder Woman, Green Lantern, Hawkgirl and Batman, with their own teams and special abilities

This isn’t the first venture into a cooperative tactical game, as The Batman Who Laughs Rising is the fifth in the Rising series, which includes the likes of Star Wars: Dark Side Rising, Harry Potter: Death Eaters Rising, and Thanos Rising – Avengers Infinity War (which we reviewed).

The game is suitable for ages 15+, is for 1-4 players, and takes approximately an hour to play. Orders are open for this which you can find on The Op website