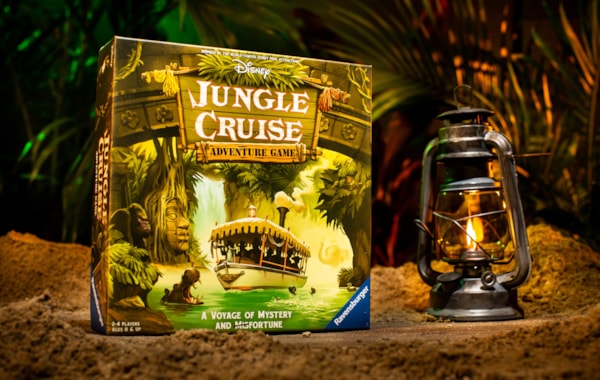 Some fun news with this one, where the Ravensburger – of the vastly popular game Villainous, alongside its expansions – has confirmed and allowed for American pre-orders of their new attraction based Jungle Cruise Adventure Game.

The game is based on the Jungle Cruise ride that exists in a number of the Disney Parks, which means we should expect loads of jokes and dreadful puns to make you smile throughout. The ride goes on for Niles and Niles and Niles… and if you don’t believe me, you’re in de-Nile (you may roll your eyes, but that’s one of the ‘best’ jokes it’s famous for!). In the ride, you’re taken around a short river filled with animatronics whilst your Skipper offers you a tour filled with puns and bad jokes. The attraction is one of the few that has been in Disneyland since day one, so it's a popular topic to use, especially given the film based on the attraction being released later this year.

This transpires into the board game, where you’ll also find yourself navigating a boatload of cargo and passengers down the river, in some familiar-looking boats. As you go you’ll need to prepare to lose some of both to the dangers of the jungle! Most simply, the skipper who finishes with the most valuable freight wins…a cruise back home.

Currently, only in America, the game is for 2-4 players for ages 8+, with a playtime of approximately 40 minutes. The release date is June 1st, 2020, and is an Amazon exclusive at the moment. We’d hope this moves to be purchasable in the UK soon, as whilst the game may embrace terrible jokes, the artwork and game quality appears promising from the gameplay video posted, suggesting it’s not just an attempt to categorise on popular attraction, but a game in its own right.

For those who have enjoyed the more recent board game into Disney, there’s also unconfirmed discussion surrounding a Haunted Mansion Game being completed, which we’re keeping an eye our for more news of.