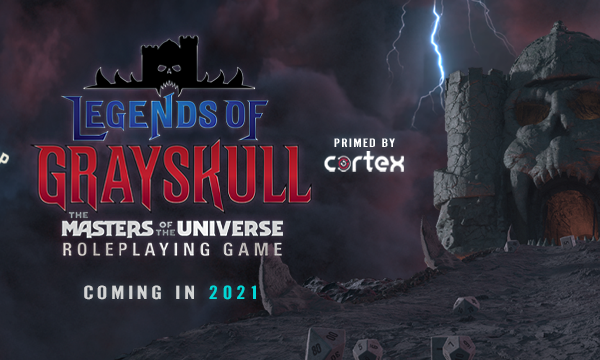 You have the Power

At a virtual convention for She-Ra and He-Man fans named Power-Con, a brand new Masters of the Universe RPG has been announced, named Legends of Grayskull.

This isn't the first He-Man News we've seen, as Netflix is developing animated shows for it, and CMON announced with a licencing agreement with Mattel a Masters of the Universe: The Board Game, which was exciting news in itself, but suggests we'll be seeing a lot of Masters of the Universe across these reboots.

Now comes the newest announcement, the brand new RPG adventure, based within the familiar world of Eternia where Magic meets Technology. It'll see you exploring the secrets of Castle Grayskull, all to become masters of the Universe

Players will be able to create their own masters, which means you can opt to create a more classic character, much like those from the original series, or create your own to fully explore the world. As there were variations in the focusses across its cartoons and comics, the rules will support differing play styles and preferences you may have. It's also worth noting that it is based within a multiverse, and so characters may have discovered the power of Grayskull in their own worlds.

This will consist of a core book, a digital companion and toolset, a community content creation and sharing platform, and an organized play program. The latter is designed to give people the opportunity to play with others around the world with ease.

Early game play examples are available to view on Youtube from Power-Con, as well as interviews with Adam Bradford and Cam Banks, the VP for Tabletop and Cortext Creative Director respectively.

The game is set to release in 2021, however, there will be a public playtesting period beforehand. You can sign up for email updates over on its site, which currently shows only the trailer, a little information, and a sign up option.