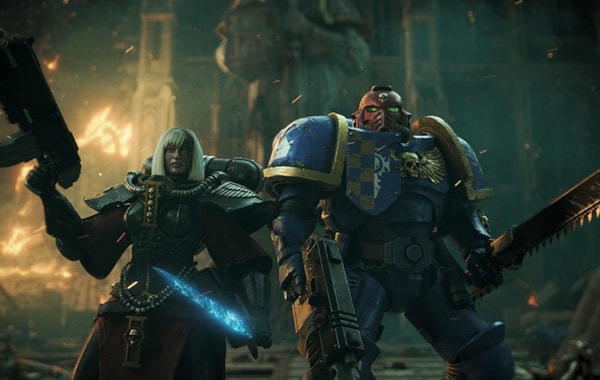 In the darkness between the stars, the weak and the faithless find no deliverance.

You know something has potential when you receive a phenomenal cinematic trailer, and this one brings with it the news of the anticipated new edition of Warhammer 40,000.

That’s right, there’s a new edition of Warhammer 40,000. It's been described as an evolutionary step, rather than the previous revolutionary design, taking on three years of player feedback and promising it to be the best edition yet.

Within it, you’ll find even more opportunity to explore the changing galaxy, but with familiar areas. If you're concerned about the change, it's not to worry, as this will be an addition to your current codex’s, rather than a replacement. Plus, the Psychic Awakening books were written with this new edition in mind, meaning they remain valid.

That's not to say there isn't changes though, as the Forge World Index Books will be changing, and there’ll be a new range of books released after the new edition comes out. Unit points will also change, in order to rebalance armies, and The Dark Imperium set is being retired.

There’s also a new crusade system worth noting, as Stu Black said that “Crusade adds an ongoing narrative to your games of 40K. Many of us like our games to have a sense of consequences from one game to another, where success on the battlefield has an impact on future games. Crusade enables your army to grow from game to game, both in terms of size but also the story it tells. Units and Characters can gain Battle Honours, special skills and Crusade relics as well as Battle Scars, which they keep from game to game.”

There’s also a mobile app, which will include an army builder, rules, additional information, as well as a new and updated website to match.

If that wasn’t enough, there’s even teasers for additional releases throughout the year. Necrons for example, are “in for a good year” when it comes to models. When asked about the new Boxed Game, its FAQ responded “Who said anything about a new Boxed Game? That sure would be exciting, though. If such a thing were actually in the works, it probably wouldn’t be long before we found out more about it...”

A set date for release hasn’t yet been provided, but it’s described as being a few weeks off – announced early just because they were excited – but its provided opportunity to find out more in daily articles from June up to launch. These will cover rules, to miniatures, to narrative. You’ll be able to get the core rules (or Basic Rules Primer) for the game completely free, with additional options to then gain the full rulebook, all through its newsletter. It promises to be an interesting one to watch!