Munchkin: Disney announced from The Op How did they know it was our unbirthday?

The Op has been giving us games from some impressive franchises, and so it’s perhaps no surprise that we see more Disney, and in this case, it’s Munchkin: Disney, bringing fairytale campaigns to tabletop, for “ear-wearing “kidults” and RPG lovers alike”.

The Munchkin games by Steve Jackson Games have always been popular, from the very first, to the multiple reiterations that have followed it. In fact, we reviewed the original Munchkin game, and we loved it, enjoying the humour of the game especially. There’s been other Disney collaborations seen before, such as Munchkin: Duck Tales, or Munchkin Marvel, and it’s far to say it’s never shied away from cool new collaborations.

An example being Munchkin: Warhammer Age of Sigmar, where you’ll be killing monsters as an Ultramarine, Necron, Aeldari, Ork, Death Guard, or Tyranid. It’s even compatible with Munchkin: Warhammer 40,000 and its expansion. It shows impressive dexterity that it can work with a range of different titles.

For Munchkin: Disney, we’re pleased to see some of our favourites included as cards. A look at the preview shows that you’ll encounter timeless monsters in the guise of Disney villains, such as Jafar, Maleficent, Ursula, gain allies such as Maui’s Hook, Jiminy Crickets Umbrella, the Mad Hatters Top Hat, the glass slippers and the Magic Carpet, or even Elsa, who can assist in combat, or help and assist other players. There’s also cards for the Mirror, as well as Simba and Kakamora, who are kind of cute. 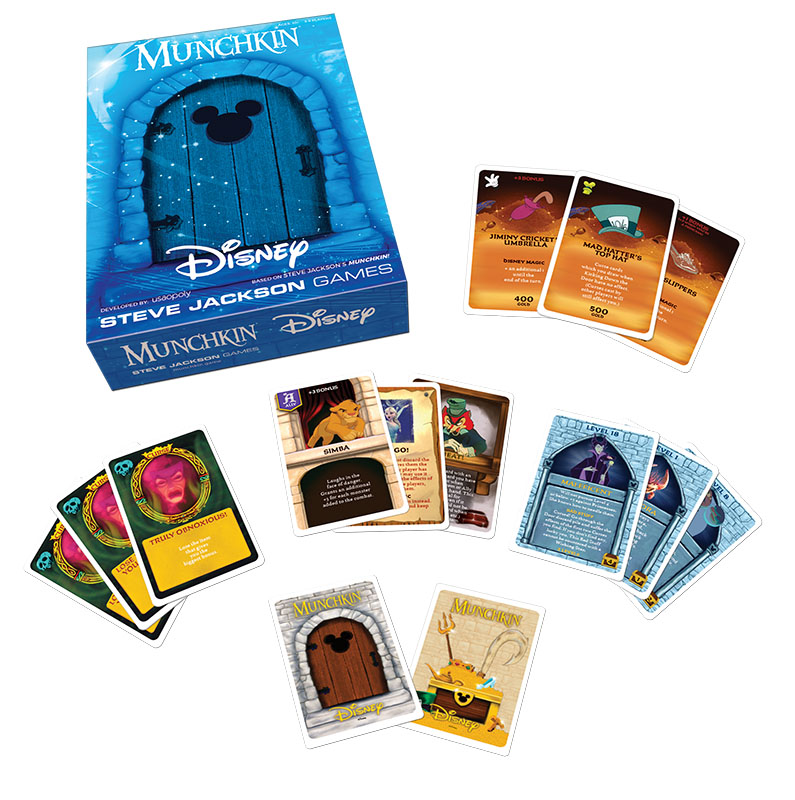 The game will be available from this Autumn, and is for 3-6 players ages 10 and over, with a playtime of around 60 minutes. It’ll contain 168 cards, 6 role cards, 6 trackers, 1 die, and of course, the rules.

You can pre-order over at the Op, or at your Friendly Local Game Store.