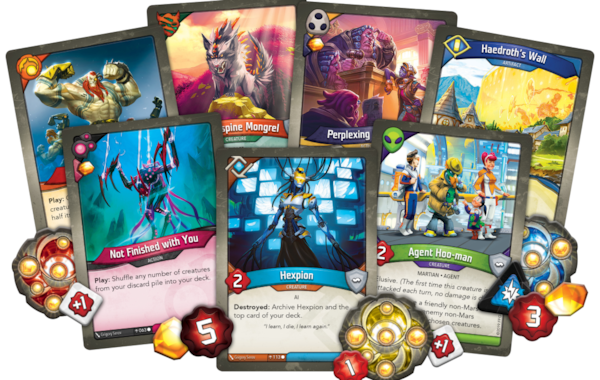 Win prizes and glory – or just survive the horror! – at London convention on September 28th and 29th

The KeyForge and Arkham Horror LCG organised play events will take place during the convention on Saturday, September 28th and Sunday 29th 2019 held in London's Alexandra Palace. That’s less than three weeks away!

KeyForge makes its return to Tabletop Gaming Live 2019 after a pre-release appearance at last year’s show. As well as having the latest sets for the competitive card game from Magic: The Gathering creator Richard Garfield on the show floor for visitors to play, Tabletop Gaming Live will be holding Discovery Pod tournaments throughout the weekend.

The Discovery Pods host three-round KeyForge tournaments open to both newcomers and experienced players. Players bring along their own unique deck – you’ll be able to pick one up from one of the participating traders in the main Great Hall – and compete against up to seven players in Swiss-style rounds.

With support for both Sealed and Archon tournaments formats, the KeyForge Discovery Pods are a good way to get your first taste of organised play for the card game – or help refine your skills. Plus, there’ll be the chance to win some amazing prizes, including Æmber tokens and promo cards.

Pick up a KeyForge deck from one of the eligible retailers at Tabletop Gaming Live to secure your place in a Discovery Pod tournament and head to the convention’s tournaments area in the West Hall to take part!

If you prefer to work with your fellow players, Tabletop Gaming Live will also be hosting multiple events for co-op Lovecraftian living card game Arkham Horror: The Card Game.

On the Saturday of the show at 1pm, you’ll be able to enter the game’s Labyrinths of Lunacy with up to 11 other players in this special ‘epic multiplayer’ scenario. A unique 80-card campaign that challenges players’ investigators to escape a mysterious dungeon, avoiding traps and monsters as they go, Labyrinths of Lunacy features up to four hours of tense and terrifying gameplay.

Tickets for the Arkham Horror: The Card Game Labyrinths of Lunacy event are £5 – you can pre-book your space here. (You’ll need a separate ticket to Tabletop Gaming Live 2019.)

On the Sunday, visitors will get their chance to descend into the Depths of Yoth, an Arkham Horror: The Card Game scenario that sees groups of four investigators head underground in search of answers. Tackled in standalone mode, the scenario sees players track their depth as they reach deeper and deadlier levels of the Mythos Pack.

Tickets to take part in the Depths of Yoth scenario are £5, with a separate ticket required for entry to Tabletop Gaming Live. The session will last up to four hours.

The KeyForge and Arkham Horror: The Card Game sessions are just some of the organised play events and tournaments taking place during Tabletop Gaming Live 2019. We’ll also have tournaments for the likes of Kingdomino, King of Tokyo, Pandemic, Catan, OK Play Duel and more – head to the tournaments page to see all that’s happening.

Elsewhere in Alexandra Palace, we’ll have a weekend chock-full of talks from designers and gaming experts, interactive workshops to help you learn how to paint miniatures and even make your own board game, participation sessions for roleplaying and miniatures games galore – and, of course, loads of the latest and greatest games hitting the tabletop this year. (Here are just 23 of the must-play games at this year's show!)

Tabletop Gaming Live takes place in Alexandra Palace, London, on Sunday, September 28th and Sunday 29th 2019. Tickets, including family bundles (kids under 10 attend for free) and weekend passes, are available now from theticketfactory.com; if you buy before the day, you’ll be able to get in an hour early – giving you more time for playing!

For more details about this year’s convention, including details everything happening during the weekend, check out the free show guide included with the latest issue of Tabletop Gaming magazine or visit the Tabletop Gaming Live website.