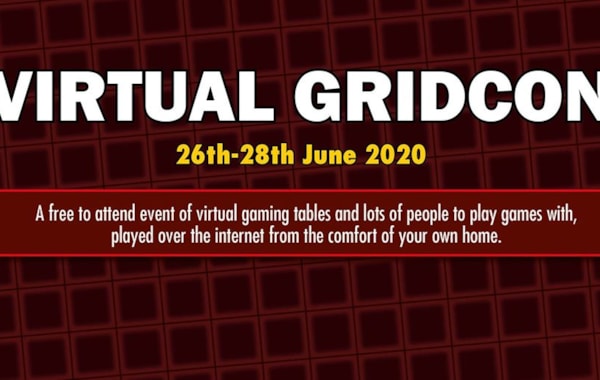 GridCon is biannual gaming convention down in Devon UK, that began in host Paul Grogan’s home but it quickly outgrew itself! Alongside fellow host Victoria Strickland of Gaming Rules!, it’s an open gaming event, and like others, GridCon has moved online into a virtual event starting today, and running through this weekend.

There’s numerous events and live streams to look forward to, that you’ll be able to find on youtube. These will include exclusive demos of upcoming games, including those such as Vital Lacerda, David Turczi, and Alan Paull, plus live streams, opportunities to purchase (GamesLore are offering discounts to games with an exclusive code from GridCon), plus an opportunity to bring and buy or exchange games.

Plus, the all-important opportunity to play and talk games with others, which you can join in on over on its Discord.  It's jam-packed with all the good stuff we expect from conventions.

In addition, a lovely part of this convention is that GridCon is also running a charity raffle, with funds going to Chrysalis Youth Empowerment Network, a charity based in Birmingham supporting the development of young social entrepreneurs in Uganda.

This raffle includes prizes consisting of 99 games or game accessories from various publishers, a total value of £3,389.87. Games include (but are not limited to!), Star Wars Outer Rim Too many bones Undertow, Ankh’or, Unlock 2, 3 and 4, Tainted Grail core box, Lords of Hellas (Kickstarter Edition), Dale of Merchants, Keyforge starter sets, Cryptid, signed games from Czech Games Edition, all the way up to a base pledge for Frosthaven!

Originally set with a target of £500, the money raised is now at a phenomenal £5,208, and any donation counts. You can find out more about the raffle (plus instructions to donate and enter!) over on its site.