Have You Played? Sagrada The Sagrada Família is everyone’s favourite building site. A monumental undertaking (literally) by famed architect Gaudi, it was started in 1882 and due to interruptions like the Spanish Civil War, a couple of World Wars, and Gaudi’s death, it’s still not complete. Apparently it will be finished by 2026, when it will lose its title as everyone’s favourite building site and everyone will have to ask if it’s actually good.

Luckily, a game of Sagrada, the 2017 dice placement game by Adrian Adamescu and Daryl Andrews, won’t take us quite so long, sitting closer to 30-45 minute mark, rather than nearly a century and a half. It is nearly as delightful however, offering players 90 beautiful stained-glass-like dice to build their own stunning cathedral windows out of – but of course, we can’t just throw them together. We’re here to create a masterpiece.

Sagrada is a dice drafting and placement game. This means we put all 90 delicious looking transparent coloured dice in a bag and draw a certain amount based on the number of players, and take turns drafting them into our own stained glass window frames.

Easy right? Well, it gets a little trickier, those frames are a double-thickness cardboard with a grid out of them to pop your dice into, they also have a slot at the bottom of the board where players can slide in their blueprints in.

These blueprints provide the grid of dice placement options for the player. Naturally you can only place a blue dice on a blue slot in the window, and you can only place dice with the matching number on slots that display that many dice pips. Other rules apply, like you can’t place two matching colours next to one another (except diagonally) nor can you place two matching numbers beside one another (in t 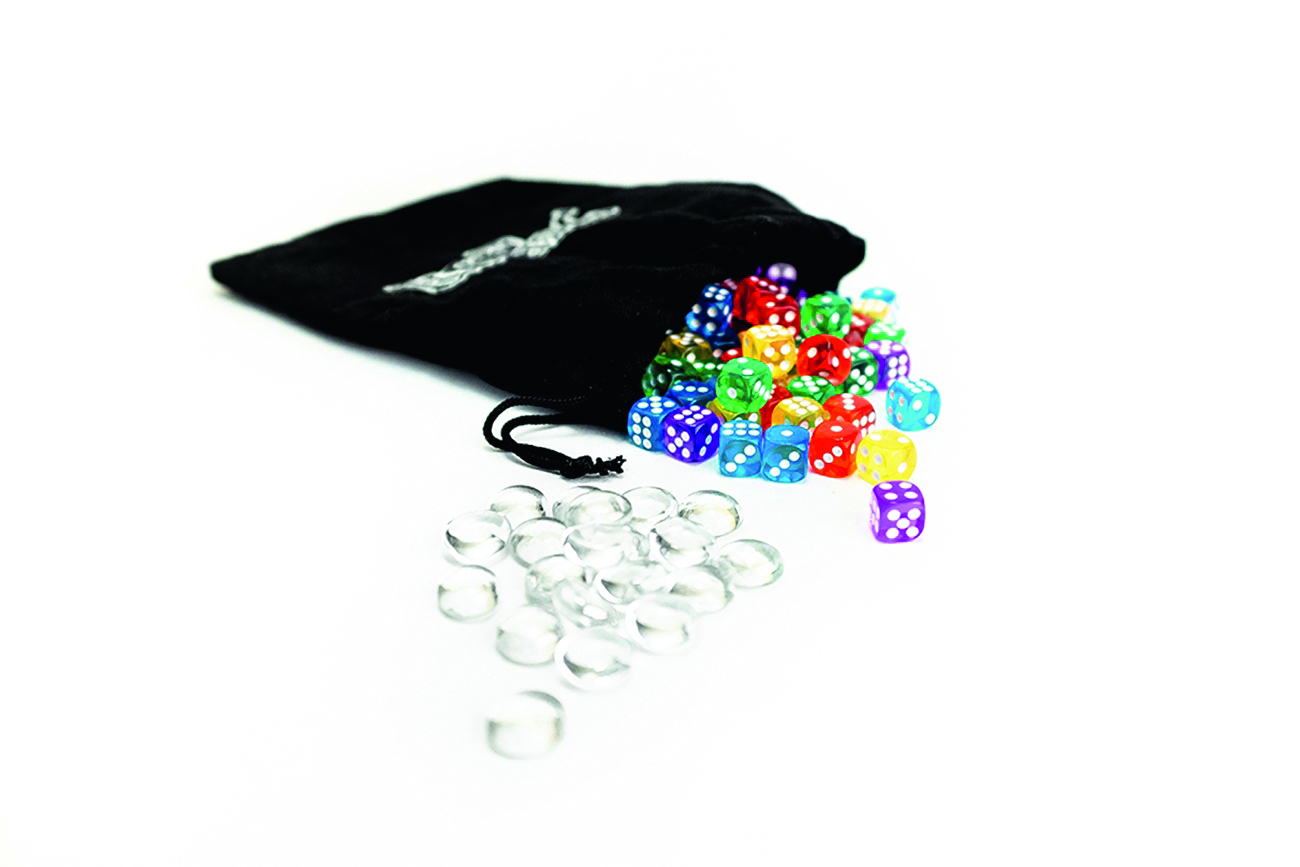 There are ways to break the rules of course, alongside all of the dice drafting is a system of public tools that everyone can access, for a cost. Here you spend ‘favour tokens’ – which are little clear glass droplets – on each of the tools to activate their powers. These can be things like ‘move two dice, ignoring the normal rules’ or ‘change the value of a dice by one’ which can all be very useful in fixing you window when you run out of placement options. The only thing to watch out of here is that if someone has already used a tool, you’ll have to pay two favour tokens to use it as well.

Players take turns taking dice from those rolled in the central area. And plaeyrs always roll double the number of players, plus one. This means there’s one left over from the roll, which goes on our turn track to count us down the ten rounds we’re playing through.

And that’s it. It’s deceptively simple to get to grips with, but entirely infuriating to master in the way that the best games are. 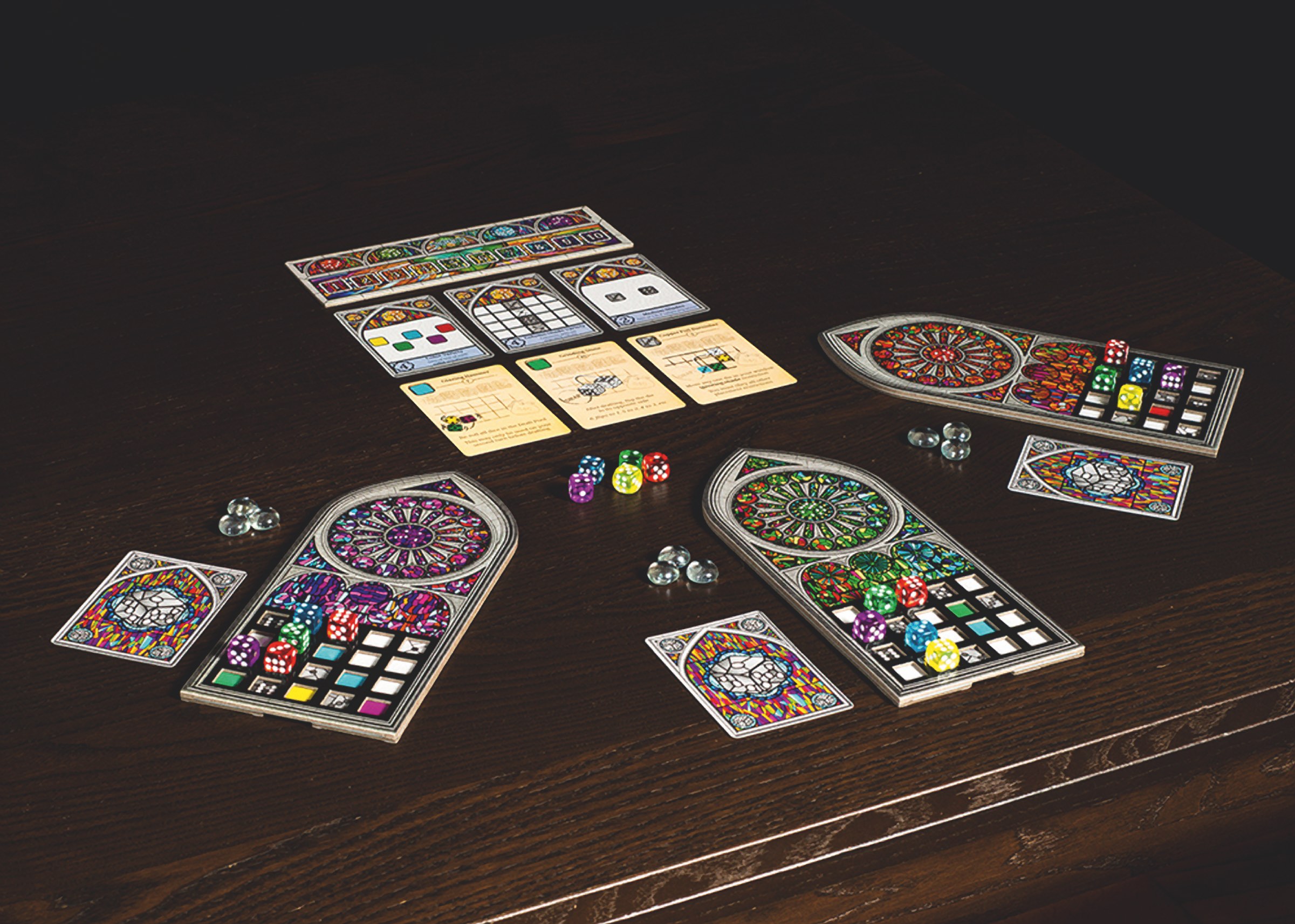 In short – simplicity and variety. There are 24 patterns across the 12 window pattern cards, all ranked in difficulty from three to six. Each of these little difficulty dots on the cards equal to the number of favour tokens you’ll be able to take into the game with you. You can mix up the number of tools available, as well as the number of public objectives. Your objectives are how you’ll be scoring the game at the end, and they’ll put different kinds of constraints on you, assuming you want to score points.

These public goals are often about the aesthetics of your window. For example, you may get an extra five points for each row of your window grid that doesn’t contain any repeating colours. This is the kind of placement decision you’re going to take into account when you’re building your window, on top of all the other rules. Additionally, with the secret objective – a single colour of dice that you score the faces of at the end of the game – players will be pulling themselves between all of these options looking for the right one.

Which is what Sagrada comes down to – how greedy do you want to be? While there is an element of luck in the game, the dice are rolled after all, it’s down to the players to work out how many objectives they’re going to fulfil. Leaving gaps in your window loses you points at the end, so any time you’re forced to pass because there’s simply nothing you can do (which might happen once or twice in most games) there’s a thin edge to attempt to balance on. Do you want to attempt both non-repeating colours in rows, and the non-repeating numbers in columns on your board? If so, there’s going to be a lot of head scratching between dice selection. 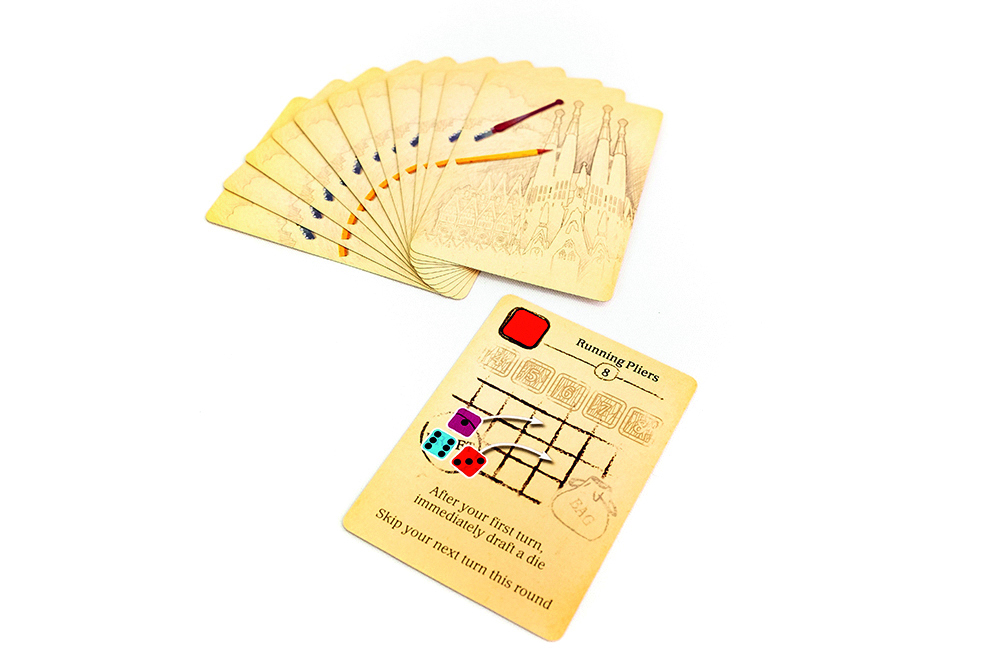 On top of all this, it contains the ever-eventful ‘hey, I wanted that!’ mechanic, where your opponents might be selecting dice from the rolled pool that you wanted and now, you’re in a tailspin of making new decisions on the fly. The more players, the more likely you are to have to flip your plan as you go. A minor point to add here is that the scoreboard is also the round tracker, so you need to flip it at the end of the game to count up your points, meaning there’s no counting as you go and no race to the finish line. You can just get on making a nice looking window that you think will win you the most points.

If you don’t have more players, the solo mode is well integrated too. While in the base game you pay favour tokens to use tools, here you’re using the matching coloured dice snuck into the corner of each card. Now you’re using some of your dice options from the pool to pay for these tool cards, which add further complications to the puzzle of what to choose. The score you’re trying to beat here is the number on the dice faces of the score track, so leaving a handful of high-numbered dice up means you’re likely to be behind when the scoring comes in. It’s an elegant system that leaves nearly no wastage as all of your choices in the solitaire mode matter – whether that’s what you leave behind or what you take. Which is all we really want from a ‘beat the score’ solo mode.

And finally, why should you play Sagrada? Because it’s tactile, thinky, and has the pleasure of offering you something beautiful to look at when you’re done. In these tough times focusing on something that gives us all direct and simple pleasures is as valuable as those games that feel like multigenerational projects.

If you liked this, you can also read our original review of Sagrada by clicking here.

Or perhaps you'll want to check out the others in the series, such as Mysterium!

You can watch the video below, or check out the full feature by clicking here.