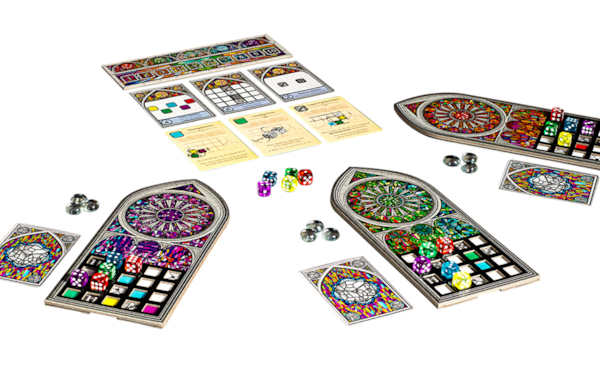 Still under construction close to 150 years after work first began, Barcelona’s breathtaking Sagrada Familia is one of the greatest works of art ever created, comprising countless minute details and religious symbols in its sculptures, architecture and stained glass windows. Just one of the many impressive aspects of Sagrada, the dice-drafting game named for the church, is how it captures the intricate complexity and detail of Gaudi’s masterpiece without necessarily complicating its gameplay – or taking a century to play.

Players begin the game with a patterned grid that slides into a beautiful window frame board, setting up the mosaic they must attempt to complete over ten rounds. To do so seems fiendishly easy, as each would-be artist takes it in turns to choose a die from a pool of coloured cubes rolled at the start of each round and slot it next to one of their previous placements. As the frame begins to fill, however, it increasingly becomes a challenge of careful arrangement as matching dice – in either colour or result (which thematically represents ‘shade’) – can’t be neighbours and certain squares that specify a hue or number must be obeyed.

Each player has a secret object card that rewards bonus points for using a certain colour, while three shared objectives encourage placing sets of numbers or avoiding particular combinations, such as repeating shades or colours in a row or column. Quickly, choosing and placing each die for maximum effect becomes a brain-busting trial of prediction, planning and a bit of luck – not unlike building a massively ambitious minor basilica, we’d wager.

Helping out are three tool cards, which can be used by spending one or two favour tokens (depending on if you’re the first to use the skill), provided at the beginning of the game based on the difficulty of each pattern. While only a handful of window, tool and objective cards are used during each match, there is a healthy selection in the box, offering plenty of variability from game to game.

Much like its namesake, Sagrada takes a number of simple materials and combines them to produce something that is both easy to comprehend and staggeringly multifaceted. There are very few surface-level decisions to make every turn – place a die, use a tool, do both or neither – yet the ramifications of each placement can be highly complicated. It’s not uncommon to find yourself trapped in a corner by the end of the game, unable to place a die and cursing your questionable use of a tool earlier on – as only full rows and columns count towards scoring, it can be devastating. Despite this, the gameplay flow never comes to a standstill, with enough options to keep players feeling in control without burying them in potential decisions.

With a gorgeous set of components and absorbing theme that seeps through the mechanics, Sagrada is a perfect title to introduce newcomers to gaming. The thick and colourful player boards are arguably unnecessary – the pattern cards would have worked fine on their own – but, like every part of the game, they work towards delivering a visual experience on the tabletop that reflects the beauty of its inspiration.

From the glassy favour tokens to the translucent rainbow of dice, which both come stored in included material bags, this is a game to be displayed proudly, drawing grandparents, children and friends alike in with its bright charms and alluring simplicity. Just beware – you might be adding a holiday to Spain to the shopping list soon.

Sagrada captures the complexity and beauty of Gaudi’s magnum opus in easy-to-understand gameplay complemented by gorgeous visuals, offering depth and replayability without ever making things feel convoluted or overwhelming. It’s a game you’ll want to show to everyone you know.