Dead Men Tell No Tales returns from the misty waters of 2015 – handy for those of us who missed the boat first time round. The box’s Aivazovsky-esque painting succinctly tells you what the dead men can’t: Players belong to a pirate gang hell-bent on looting treasure from Skelit’s Revenge, the most feared and haunted ship on all the seven seas. Captain Fromm’s (literal) skeleton crew has other ideas, however, and is rather rudely blocking the way. As are fires, which blaze from bow to stern.

The instruction book gleefully states there is only one way to win this seafaring co-op, yet multiple ways to lose. And it’s a very valid boast. Play starts with each player drawing and laying room tiles to build the boat. Tile placement appears inconsequential at first (the only rule being that doorways match up) but precision is required because of the precarious trapdoor tokens. Too many interconnected rooms will allow deckhands to spread out via the trapdoors until – Huh? How did that happen? – you’re doomed. Too few interconnected rooms will lessen the trapdoor threat but increase dead ends and mazes, which limit player movement. A game-over scenario if treasure is stashed beyond reach on the other side of the ship.

Then there are raging fires to keep under control. Each room has a dice that ticks towards six if left unwatched, triggering catastrophic explosions and, yep, your smoky end. There are also bony-buccaneer guards waiting ominously, who will give up bonus cutlasses and rejuvenating rum – only if you’re beefcake enough to beat them. Oh, and don’t forget to keep an eye on your fatigue levels too…

It’s a heck of a lot to think about in the best possible way. There’s little room for alpha gamers as all hands are needed on deck, and the generous five-action turns and special abilities mean every player is involved. DMTNT is a true team game where glory or death is achieved together. Failure needn’t be an inevitability if each element is handled skilfully, although rest assured, it will happen frequently. This challenge will keep calling you back for more punishing sessions, like a siren song luring your crew towards the rocks. 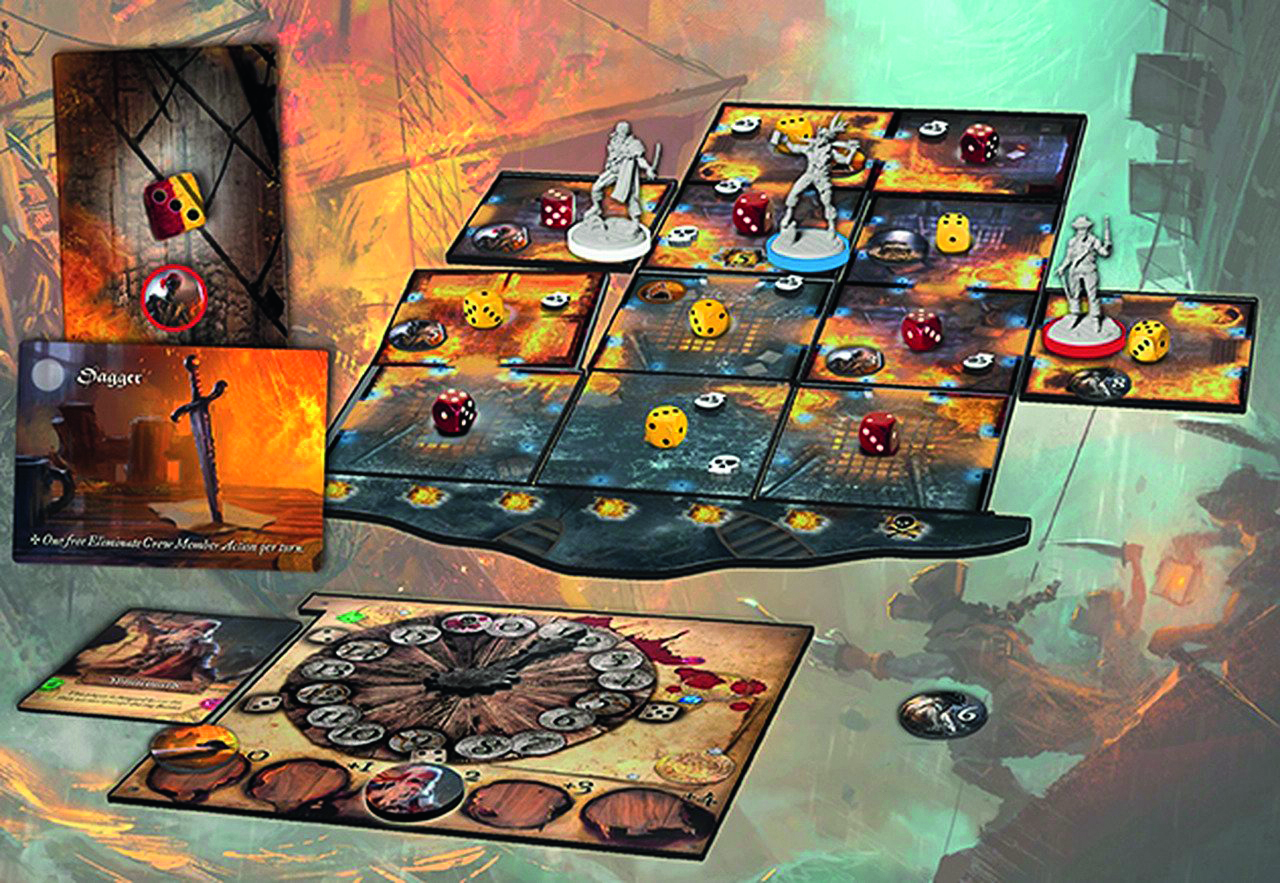 If and when winning becomes plain sailing, there’s the option to increase how much treasure is needed to win. Alternatively, add Captain Fromm into the mix. This old sea dog is almost cockroach-like and not even a room explosion will finish him off – he is already dead, after all. Players will eventually need to defeat him before victory can be declared and riches enjoyed.

Co-operative games often attract families, and the popular-with-children pirate theme doubles that appeal. The 13+ age guide should certainly be interpreted liberally; savvy whippersnappers aged nine and up make more than capable crew members. However, this is by no means an entry-level option as play feels intermediate rather than beginner, so don’t expect any cabin kids to go it alone.

Kane Klenko’s sophisticated and thorough design offers a high-replayability factor. It’s interesting to test different room combinations/play as all the characters/sample the full complement of item cards, and it will take multiple playthroughs to exhaust all possibilities. Components are just as well considered. Time and money have clearly been spent on details such as the fire-coloured dice and wooden deckhand skulls. Unfortunately, it seems not a lot of effort went into imagining the female figurines, whose heaving bosoms, skinny waists and gravity-defying bottoms are embarrassingly cliched, nay insulting, for 2022. All of that aside, Dead Men Tell No Tales has the chops to get you and your fellow gamers talking. Mostly about how to plunder that flamin’ treasure.

Also, read our review of its expansion: The Kraken!

TRY THIS IF YOU LIKED: Forbidden Island

And if you don't have your own, find a copy here!

Robbing an enchanted pirate ship is the next port of call for anyone finding it easy to escape Forbidden Island unscathed. Both games share similar grid-movement devices and fancy plastic pieces, while the co-op nature keeps all players on board.