There’s no place for racism in magic, says Wizard of the Coast Cards with offensive imagery to be removed.

Wizards of Coast has announced changes to Magic the Gathering Cards due to racist imagery. In particular, this will remove the Multiverse ID and the Gather card image for the card Invoke Prejudice, originally printed in 1994.

The card itself depicts Klansmen, with the art completed by Harold McNeill, who has been previously known for references to Nazi Imagery. It allowed players to counter creatures of a different mana colour. The multiverse ID it was subsequently codified with similarly refers to number significant to Nazis and white supremacists.

It’s been contested for a long time, but with the global civil rights activism Wizards of Coast have reviewed their cards, and this key one has been amended.

It said of this that “There's no place for racism in our game, nor anywhere else. But to that point, it should never have been published nor placed in the Gatherer. And for that we are sorry.”.

In addition to this, it will be removing images from the database that are racist or culturally offensive, where a statement explaining the reason for the removal will replace it. Such cards include the aforementioned Invoke Prejudice, Cleanse, Stone Throwing Devils, Pradesh Gypsies, Jihad, Imprison, Crusade. 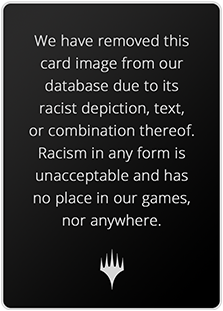 These cards will additionally be banned in all sanctioned tournament play.

In a later tweet, it also confirmed it was to be reviewing every card printed, and that whilst some cards have already been removed it was not “exhaustive catalogue of every problematic card in Magic’s history, and we will continue to take actions on similar cards in the future”.

Responses to this have been mixed, some praising that this is a necessary step, and some referring to past failures and silences.