Beasts of Balance comes Back! There is now something there that wasn’t there before….

So here’s the thing. A while ago, we reviewed Beasts of Balance, which you can check out online. Once upon a time called Fabulous Beasts, Beasts of Balance is a balancing game (yes, you wouldn’t have guessed it from the title) where you’ll try to build a tower, but here’s the twist – it’s app-connected too. What that means is, when you play, your creations are mimicked in the app, as do additional actions you take, using NFC technology. As you play, the beasts lose energy, and you’ll have to provide them with extra energy. When you add a new plinth in to support your tower, you’re crossing breeds – so you’ll end up with some fun animal evolutions too!

It was a Kickstarter Creation previously, and we were fans of it (as were the various award givers, as it’s got compliments as far as the eye can see!). Now, we’re pleased to say it’s back and available for purchase.

It’ll set you back £69 at RRP, though at time of writing it’s £59. For your money, you’ll get the app, compatible with iOS and Android, 24 artefacts to stack, and two game modes being co-op and battles mode.

In addition, you can get some of the more elusive legendary beasts, such as the Omnibeast, Fancyprance, Hotbelly: The Hangry Dragon, and Moby Brick: the Space Whale in expansions. Fancyprance: The Fabulous Unicorn, for example, is a cost of £16, and looks exactly how you’d expect it to, but adds a whole range of new evolutions you can collect. There's also some paranormal pieces you can add too - namely, the Ghost Crab. 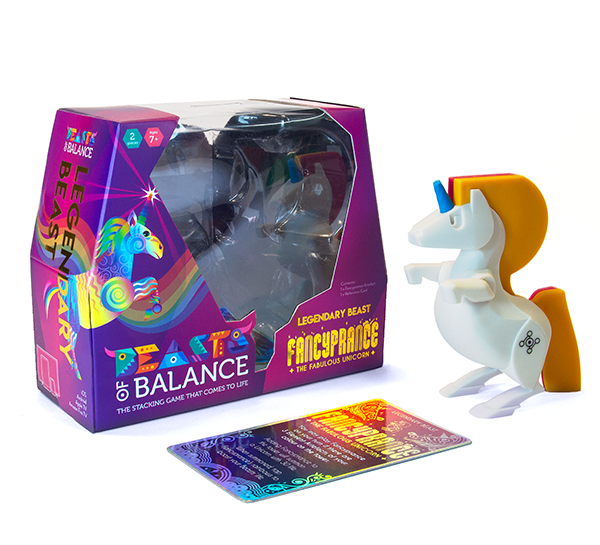 Other expansions include Battlecards, again at £16, which add the chance to ‘smite’, ‘hex’ and ‘nope’ the opposition. These use augmented reality battle cards, using the same NFC tech as the original game pieces, to add to the competitive element.

You can get Beasts of Balance, and the expansions if you prefer, as available on their main site. The core game is for 1-5 players aged 7 and over, and takes around 15 minutes to play.