Ten of the Best: Mystery Games Exploring a mystery, whether that is one that sees you tracking down a killer, escaping a locked room, or even travelling through time to set the right things right, is one of the great cooperative gaming pleasures. If you’re thinking about how you’re going to get people to play games together after Christmas dinner, we think there’s no better way than solving one of these boxes together. Join us then for ten of our favourite games where you’re the sleuth, or at least, you’re trying to be.

1. Detective: A Modern Crime Board Game – Season One 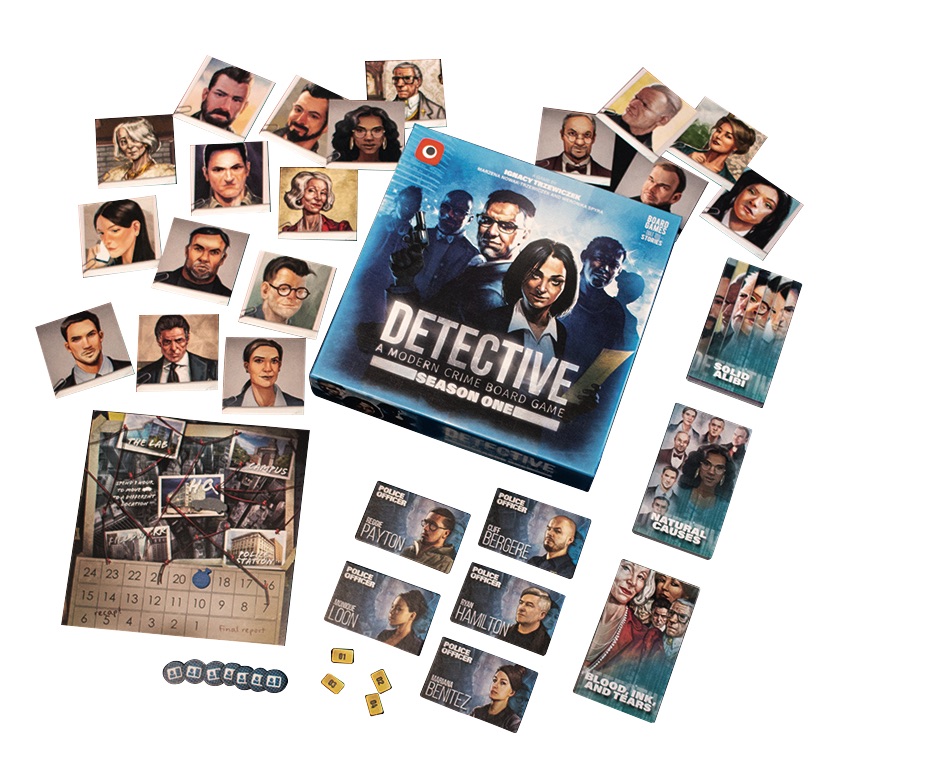 This streamlined and slightly pared back version of the Detective series from designer Ignacy Trzewiczek sees players solve a handful of cases using only their wits and powers of deduction. It’s a game that is almost entirely freeform in your sleuthing – you’ll be given information, and leads to follow, but how you interpret and discuss the situation amongst yourselves is the only way you’ll solve the case. Using a slick digital database entry system, that multiple players can access at once, meaning your forensic combing can bring about eureka moments as well as wonderful red herrings. 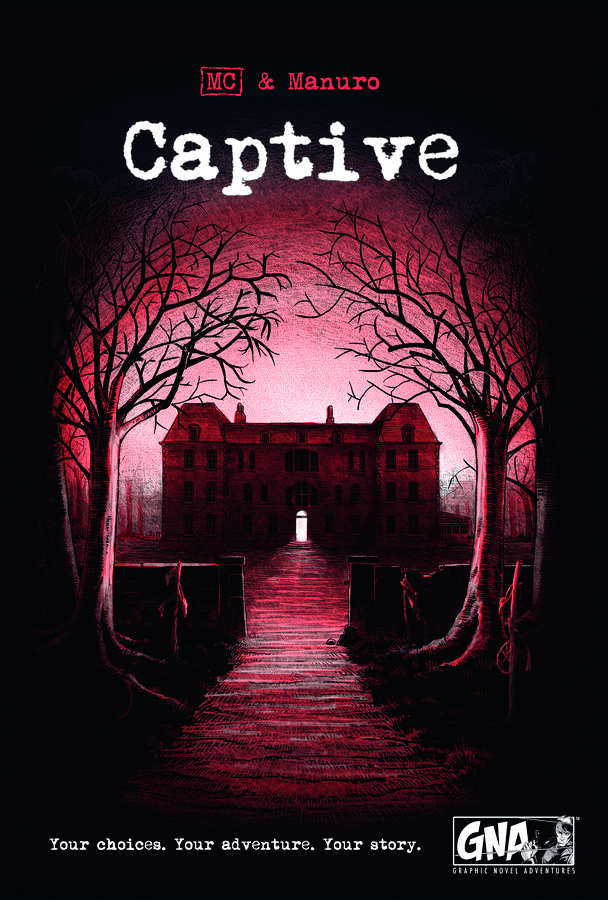 The just released graphic novel adventure sees you play out an interesting and exciting version of the movie Taken. The game comes in the form of a graphic novel where you are attempting to track down you daughter, kidnapped by a strange set of cultists, in a spooky house. With classic choose your own path mechanics and interesting choices which really do rely on your ability to ‘read the room’ – although in this case it’s a beautifully drawn comic panel – it’s an interesting entry worth exploring. The use of stats and the timer system means that the way you approach any situation will be based on your own strengths as well as how much time you’ve already wasted. 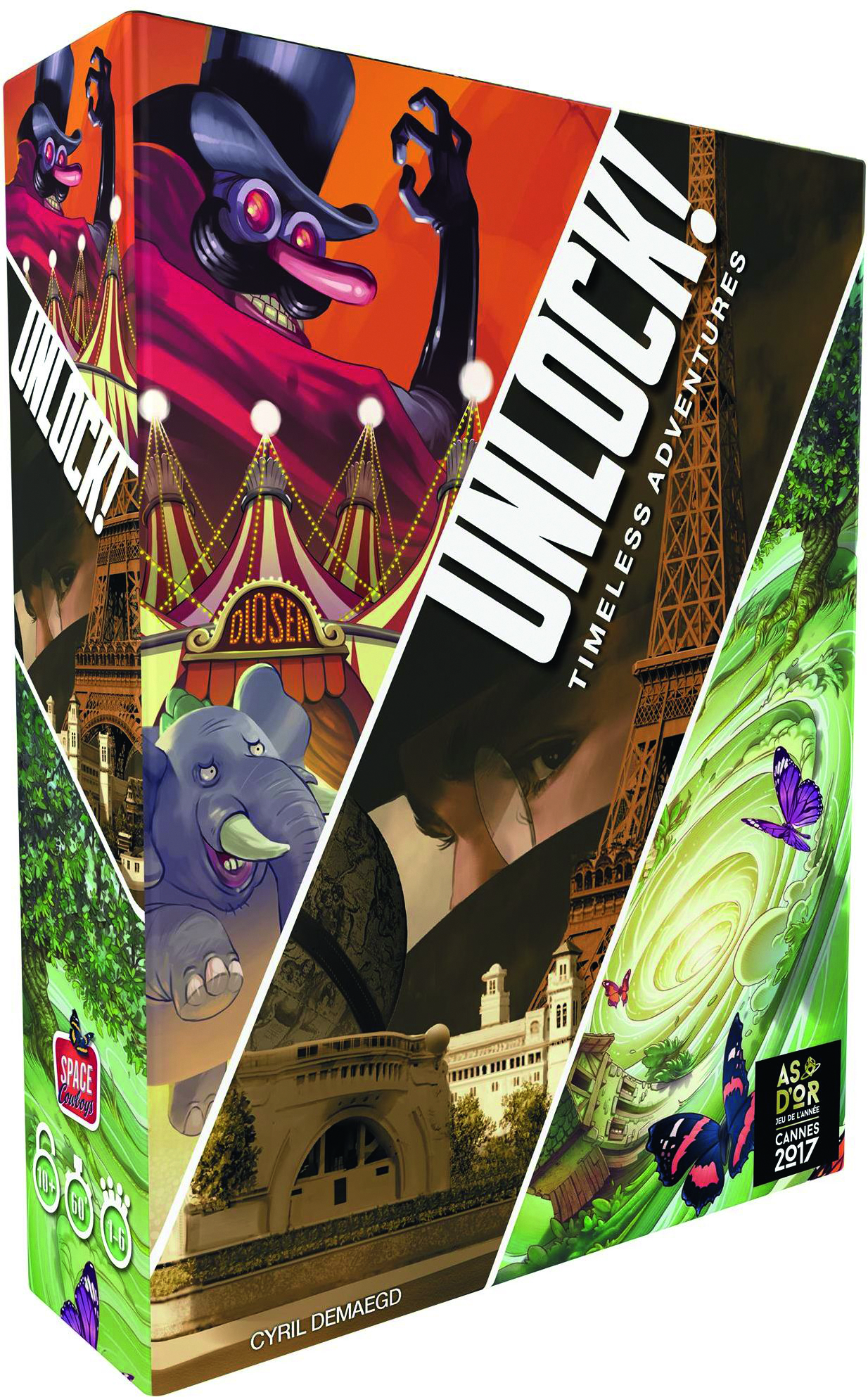 The Unlock! series has you solving a range of puzzles – anything from crimes at the circus to strange public challenges offered by millionaires. All of these scenarios see you applying a good mix of lateral thinking and scouring cards for secret number. The range of puzzles hidden inside each adventure is staggering – some require taking a different look at the card in front of you (literally), whereas others might need a bit of deduction from clues generated via the game’s smartphone app. The latter also tracks your time in the game and offers hints if you really do get stuck. A great accessible family entry. We like Timeless Adventures particularly.

Buy your copy of Unlock! here, or read our review of Mythic Adventures, Escape Adventures, and Secret Adventures, by clicking these links. 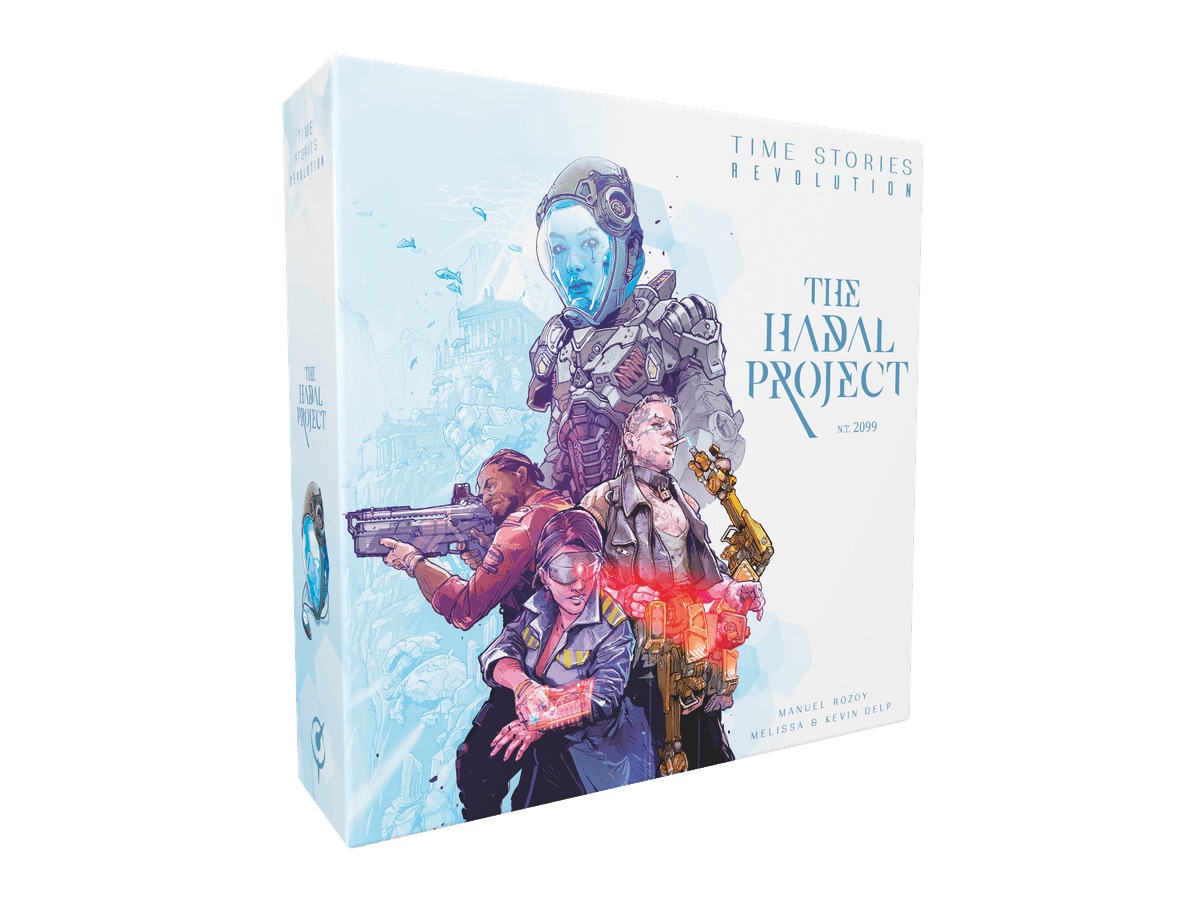 This is the younger sibling of the titanically popular Time Stories game. Rather than investing in a series of expansions over time, players can pick up a single ‘blue cycle’ box and get playing straight away. These games use the smart ‘pick a card from the panorama to explore’ adventuring technique. While a lot of the games on this list are very explicit about how to win the game, Time Stories: Revolutions often asks you to work out what you need to do for the best outcome as well as how you’re going to do it. This approach makes for a very fluid feeling game that can leave a bit of chin scratching even amongst seasoned players.

Buy your copy of Time Stories here, and read our full review by clicking here 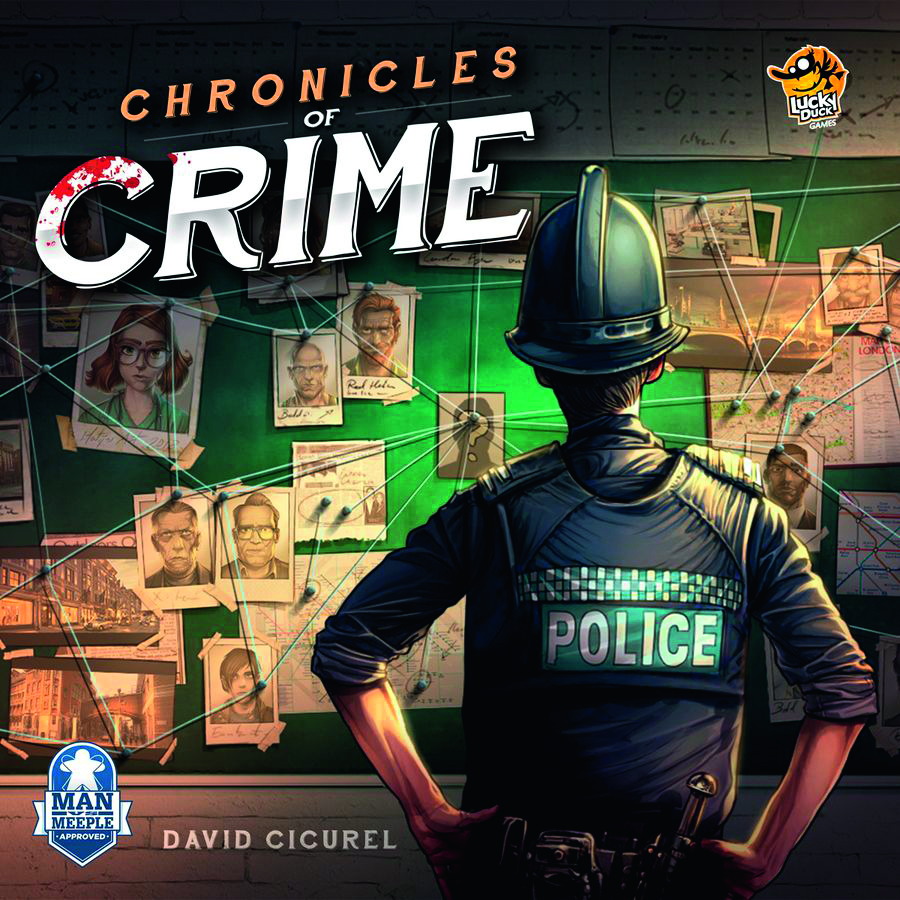 Chronicles of Crime comes in many flavours – including the recent 1400 entry reviewed in this magazine. Pick your era and flavour of crime, whether that’s noir, the 1980s, or the 1400s and get to work solving it. The game, like many on this list, uses an app – but in this case uses some clever QR code technology to lead players around. Expanding your collection is as simple as downloading new cases to solve. A great addition for those who are happy leaning on technology during their gaming.

Read our review of Chronicles of Crime in full here, and pick up your own copy here 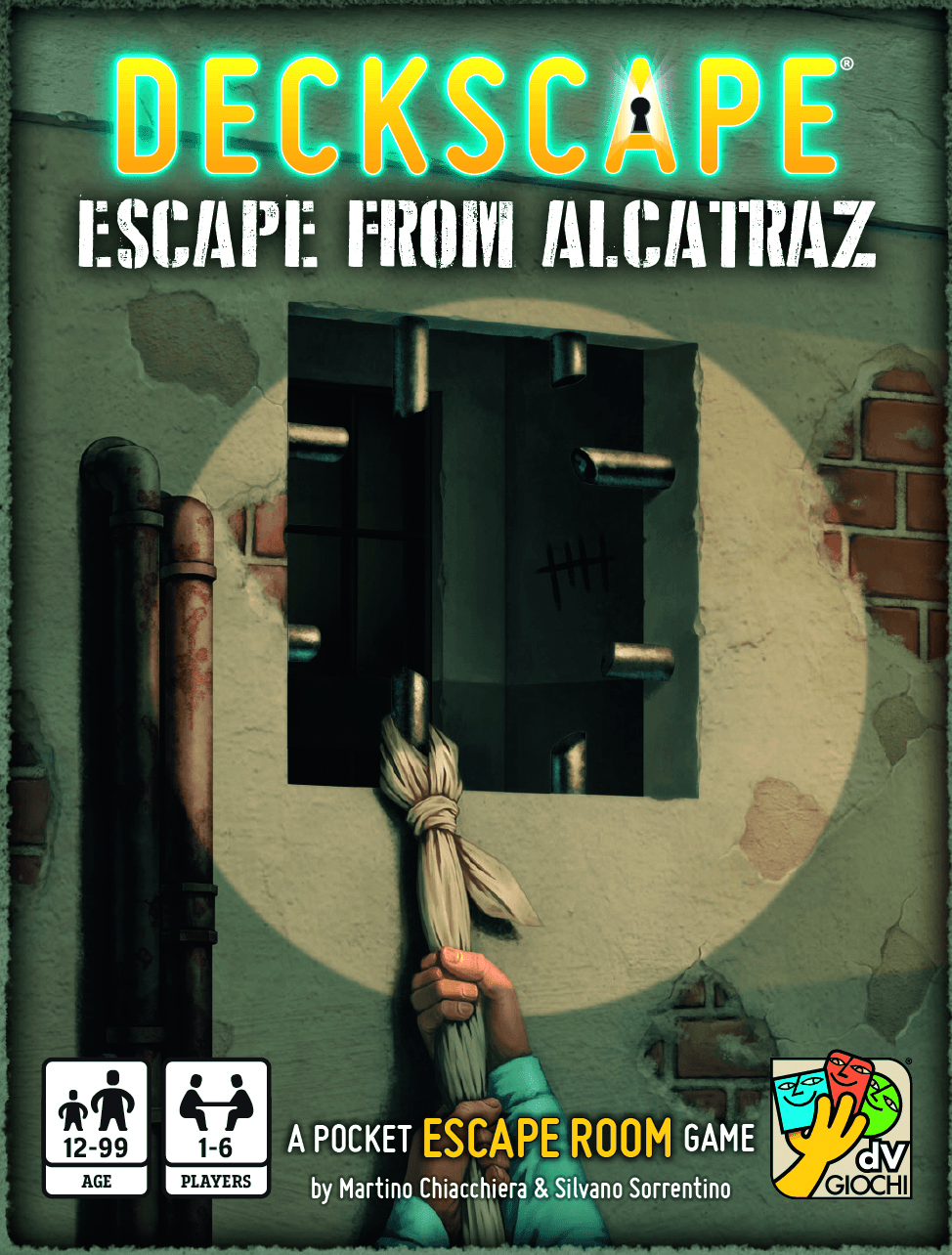 These small, one-off games tend to use a different gimmick between boxes. While in one you’ll be setting up a scene by slipping cards into the box, and using a ‘discard to uncover’ system, others might use a ‘multiple path’ deck exploration mechanic. While these games don’t offer as much brain burning joy as others, they also have the benefit of being very accessible for a range of ages and can be quite a compelling way in to the world of mystery and crime solving games. Escape From Alcatraz plays with some fun tropes in a jolly, trashy way, and is a great place to start.

You’ve got to get out of this game somehow. The EXIT: The Game series is an interesting way to explore the escape room in a box style game for this list, as it’s one of the few which don’t tend to use some kind of smartphone app. Instead you’ve just got pen, paper, a booklet and a decoder disc to work out which symbols to follow down the

rabbit hole. Oh, and maybe some scissors. Yes, these games are ones which will ask you to occasionally rip up the box to find some hidden clues. It adds a bit of drama – or a very final form of legacy gaming – and is well worth it for those who just want a screen-free evening. The Pharaoh’s Tomb is the classic from this line up.

Read our full review here, or click here for EXIT games to buy 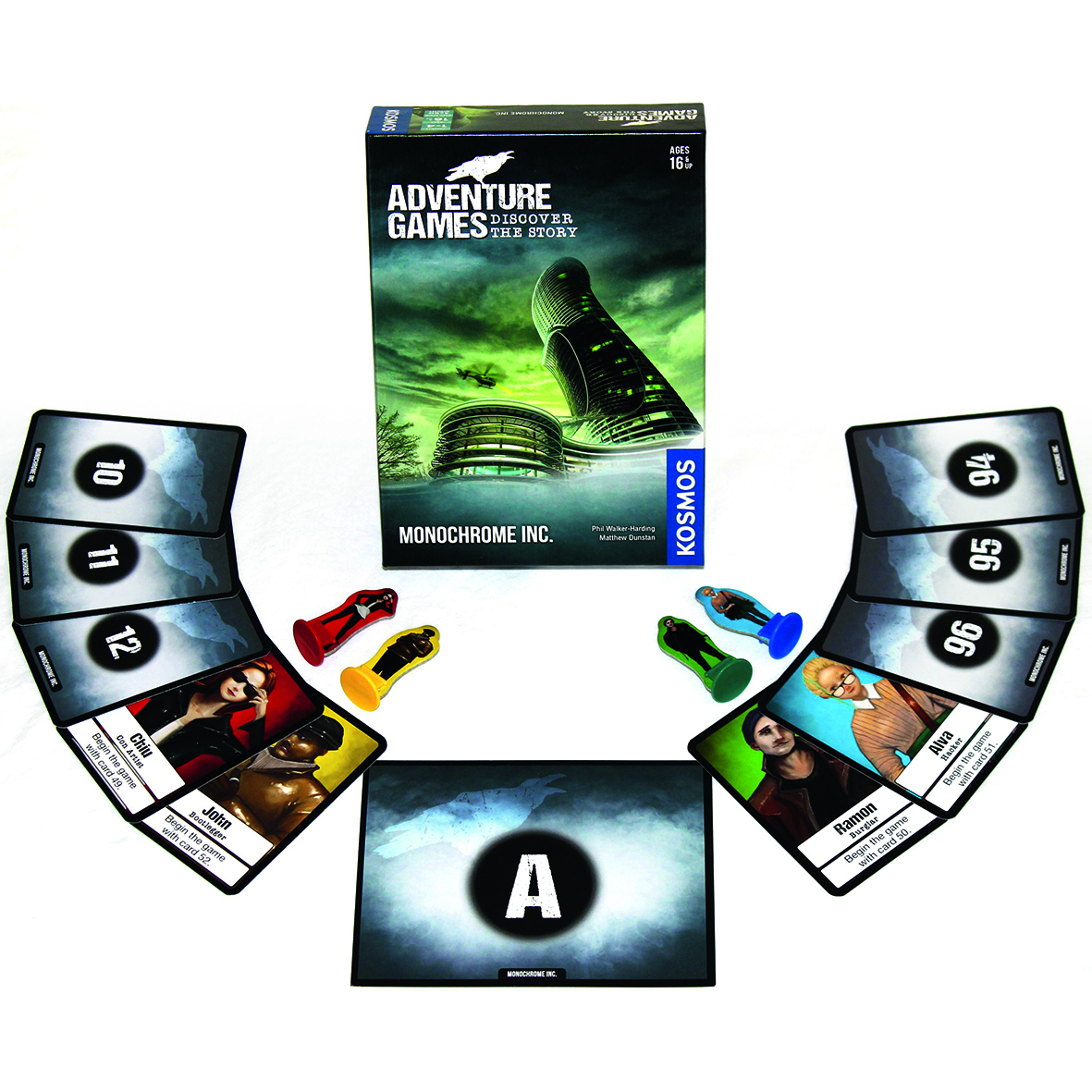 If, instead of escaping something you want a bit of adventuring, then the sister title to the EXIT series is here for you. A narrative, story-led game that might remind you of point and click adventures like The Curse of Monkey Island and Broken Sword. Somewhere between a sleuthing detective game, and an escape room, players will be working out how to override systems and puzzles with a strange collection of objects and a strong dose of lateral thinking.

Click here to pick up a copy of Adventure Games: Monochrome inc (or others!), or here to read a review of it. 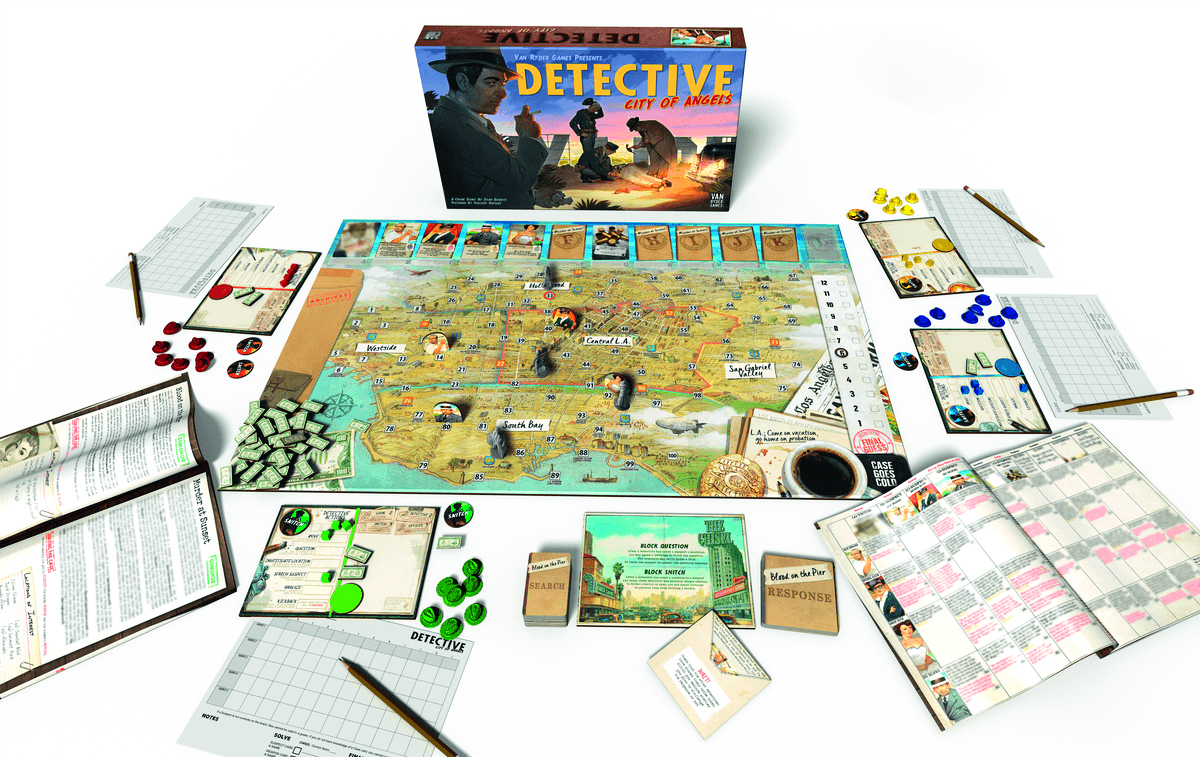 Maybe the most ‘board’ game on this list, and one for hobbyists. It’s 1940s LA and you’re going to noir your way to the bottom of this case. With beautiful hand painted art by Vincent Dutrait, players take the role of investigators trying to close a case – or that of the antagonist, The Chisel. This secondary role is one of feeding players slightly misleading information during interrogations. A great asymmetrical take on the ‘whodunnit’ genre from Van Ryder Games.

Read a review of this game by clicking here, and you can even watch an interview with the designer Evan Derrick, over on our YouTube! 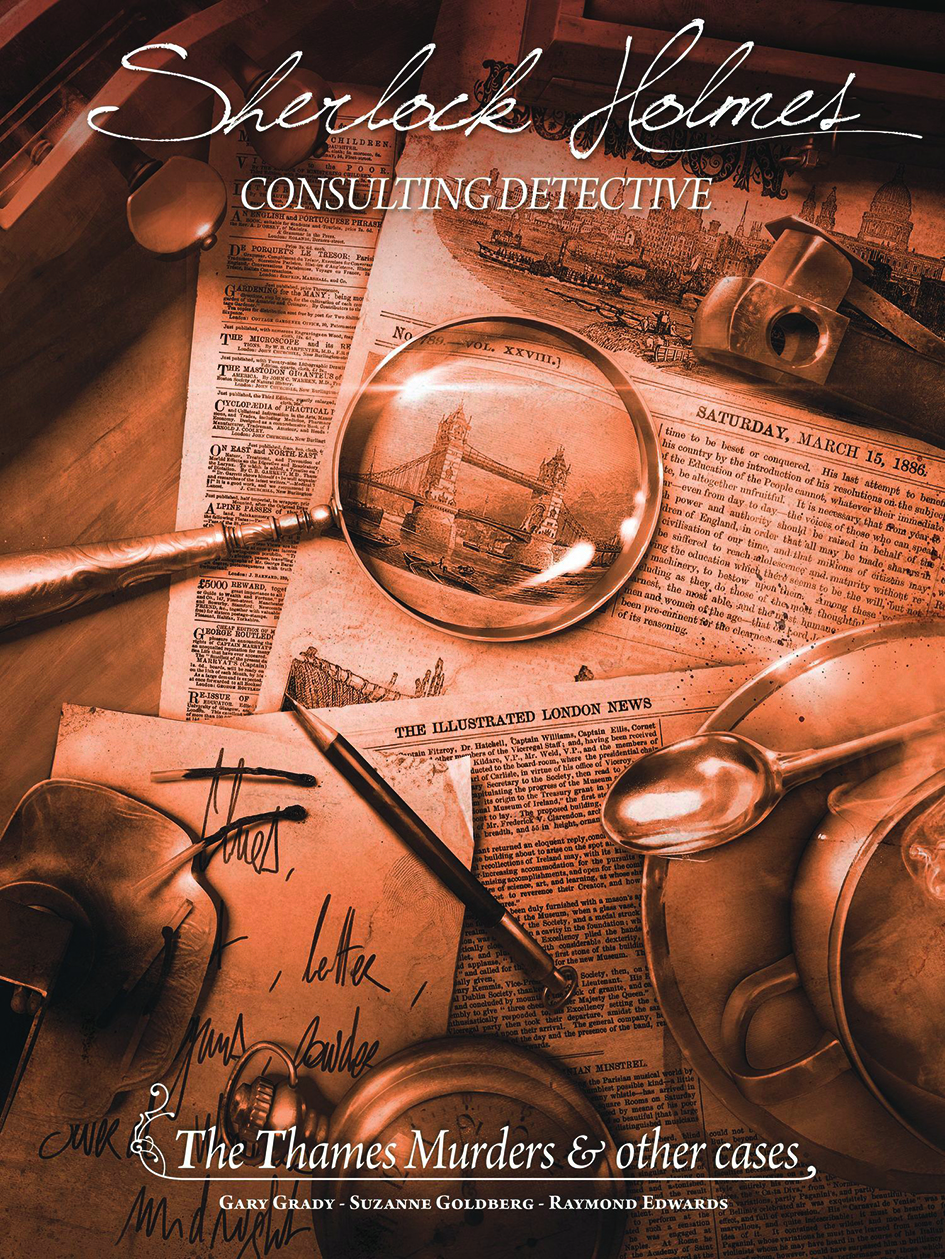 Race against Sherlock himself to uncover and untangle these twisty cases, and he won’t hold back, however elementary your detective skills might. With new cases still coming out for this 1980’s classic, there’s plenty to be getting your teeth into, hounds of the Baskerville style. Setting the blueprint for many games in this genre, players will be spending time running around London, interrogating various people and reading the day’s paper for clues before, usually, being disappointed they got it all wrong when Sherlock reveals his findings. A classic worth investigating.

This article was featured in issue 49 of Tabletop Gaming. Pick up the latest issue of the UK's fastest-growing gaming magazine in print or digital here – or subscribe to make sure you never miss another issue.