Off the record, on the tabletop, and very hush-hush.

With Detective: City of Angels, designer Evan Derrick wears his influences proudly on his grubby trench coat sleeve. Set in 1940s Los Angeles, a map of which is glowingly depicted on the game’s huge central board, it casts players as hard-bitten, rule-bending gumshoes who are out to solve crimes by pretty much any means necessary. So it’s no surprise while playing to taste the cynical tang of classic noir cinema like The Big Sleep, or feel the brutal, nihilistic force of James Ellroy’s novels, including LA Confidential, whose movie adaptation provides a particularly pleasing Easter egg on one of the components (we won’t spoil it). 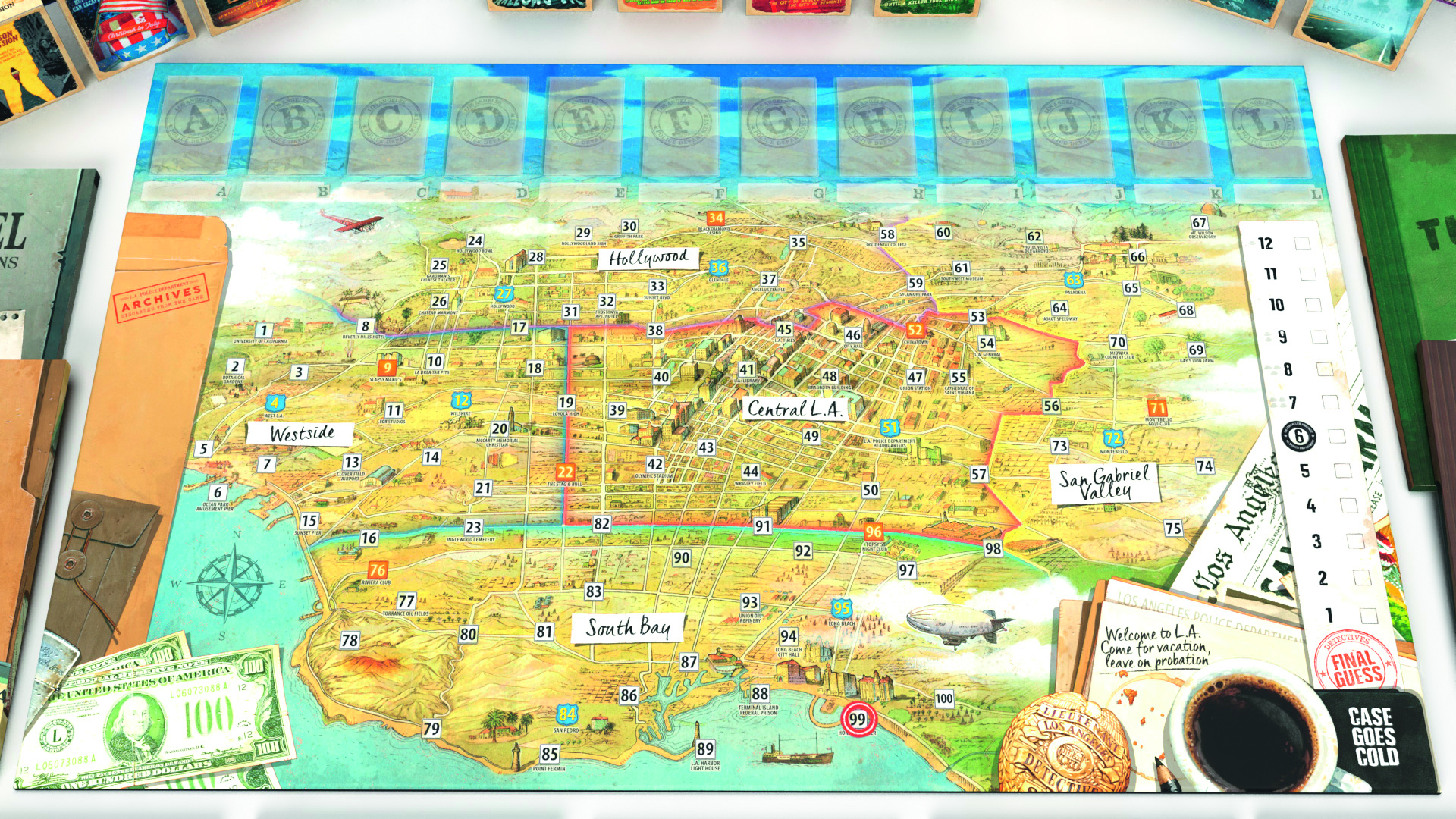 If you’re a fan of the genre, or even if you just enjoyed the LA Noire video game, there’s a good chance Detective: City of Angels has already caught your attention. And it will reward you. The core box comes with nine solidly written cases to crack, each represented by a tuck box packed with secret clues, and the game provides a variety of modes in which they can be tackled. Sleuth mode allows for solitaire play, involving its own numbered-entry book and case cards. It is elegantly executed, and makes for a deeply satisfying, narrative-driven solo gaming experience – the best we’ve played so far this year, in fact.

Head-to-head Mode is calibrated for two players. One is the Chisel, who knows the details of the case, including the solution, and effectively GMs the scenario, controlling all the suspects. The other is the detective, who wins by solving the case, or loses if the Chisel manages to throw them off the trail. Finally, there’s Classic Mode, which is the default version for 3-5 players. One is the Chisel, while the others are all competing detectives, who will steal evidence and bribe snitches to try and slow down or hijack their rivals’ efforts. Whichever mode you play, there is a race-against-the clock propulsion to each case, which will always end with a big final reveal.

At the heart of the gameplay is Derrick’s “ARC system”, referring to its Adaptive Response Cards. Unless you’re playing Sleuth (where the book does the Chisel’s job), these come into play whenever a suspect is questioned – which is often. When a player is on a location with a suspect, they can spend one of their four actions to question them, choosing as their topic any evidence card they’ve gained knowledge of (i.e. seen and placed a knowledge marker on). The Chisel then picks a response from a specific character card, slips it into a special sleeve, and hands it to the detective to read to themselves. It might reveal the most useful response, perhaps unlocking a new clue. Or it might be a lie. 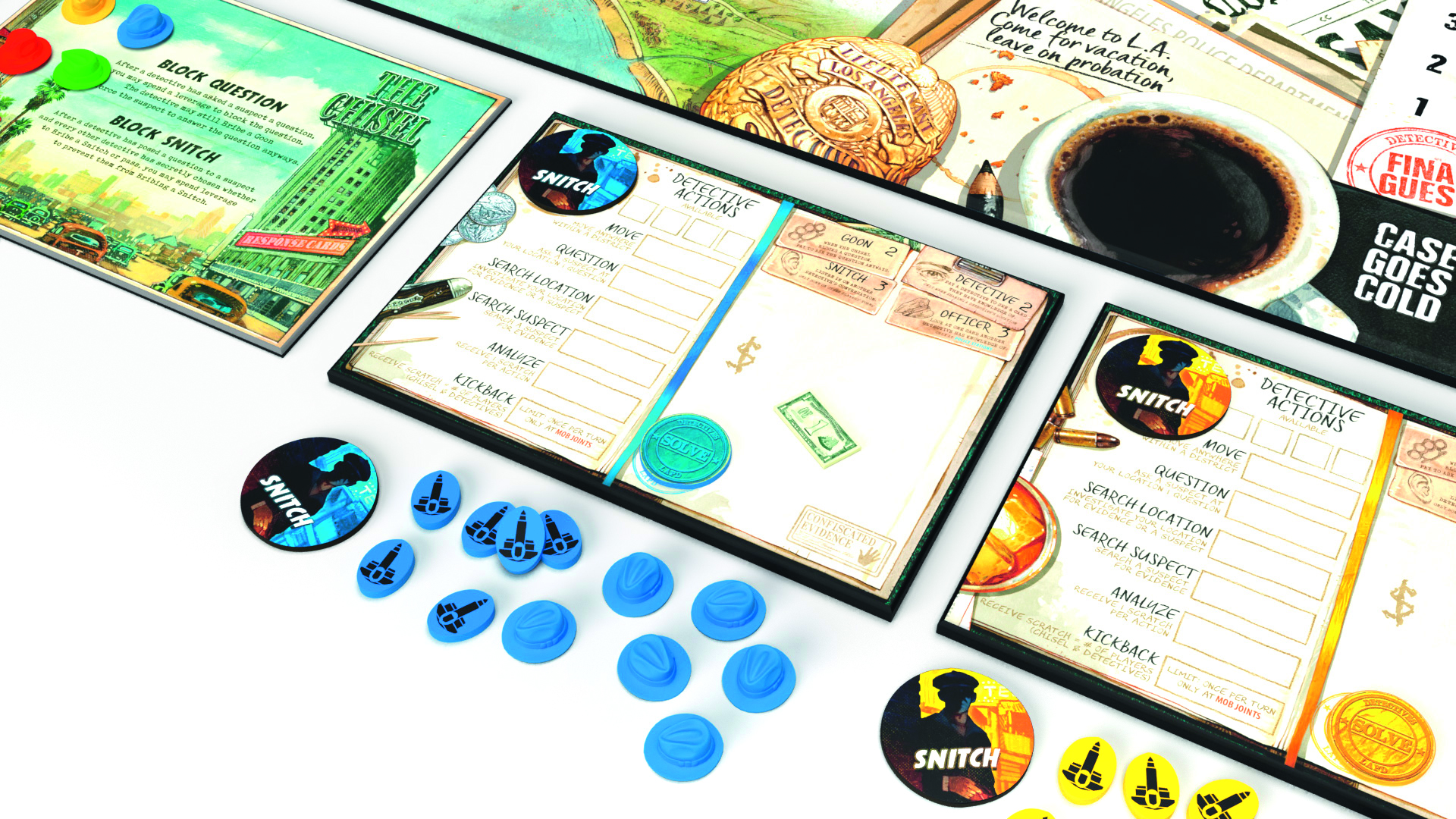 It’s up to the detective to decide and, if they feel the need, challenge the response. If the Chisel reveals it was a lie, then the detective gains leverage over the suspect, guaranteeing them the most useful response on a subsequent interrogation. However, if they’ve challenged a truthful response, the Chisel gains that leverage, which can be used to block certain future actions by the detective.

It’s a neat, simple system, though in truth it’s rather more fun being a detective than the Chisel, while the Classic Mode-only system of the other players deciding whether or not to spend “Scratch” (money) to sneak a look at another player’s response card can deaden the pace a little.

It’s also worth noting that, once you’ve cleared all nine cases, the replay value is bupkis; there’s no fun in going back to a solved case, unless you’re going to play Chisel for another group. There is an expansion, Bullets Over Hollywood, which contains four more cases, but this will set you back another £40. Still, as someone once famously said, “Forget it, Jake. It’s Chinatown.”

A neat and easy-to-learn RPG-lite game with a smooth interrogation mechanism and an immersive theme. Upgrade to ‘Must-Play’ if you’re looking for a great, quick-to-setup, narrative-driven solo experience.

TRY THIS IF YOU LIKED LA NOIRE…

If you were impressed by the way the 2011 Rock Star video game challenged you with detecting a lie during an interrogation, you’ll appreciate Detective: City of Angels’ achievement of the tabletop equivalent.

Want to see more from Van Ryder Games? See below an interview with the designer of Detective: City of Angels, from Virtual Tabletop Gaming Live 2020, and many more on our Youtube Chanel