Be Afraid (or Not) With SHIVER Gothic: The Horror Roleplaying Game For Fans of Horror B-Movies and more The expansive follow up to SHIVER is now on Kickstarter, so we took the opportunity to catch up with Barney Menzies of Parable Games about SHIVER's place in the horror tabletop RPG scene

Immortal words that point the finger at the next victim for any good horror-based or spooky film plot, we’re pointing the finger at Barney Menzies from Parable Games, for details on the new expansion to their horror based roleplaying game, SHIVER.

To start at the very beginning, SHIVER launched onto Kickstarter last year as an RPG that has a foundation in pulp TV shows and horror films, bringing their stories to life in an interactive manner. Horror isn’t new to RPGs, in fact D&D’s venture into different horror world building options in Van Richtens Guide to Ravensloft was considered a success, and amidst hundreds of Zines created in this Zine Quest replacement's Zine Month, there was a visible saw a surge in Mothership (Sci-fi Horror) based RPGs, but it’s the inspiration from a generally small budget yet extravagant plot media that we all know and love, that sets Parable Games’ SHIVER apart. 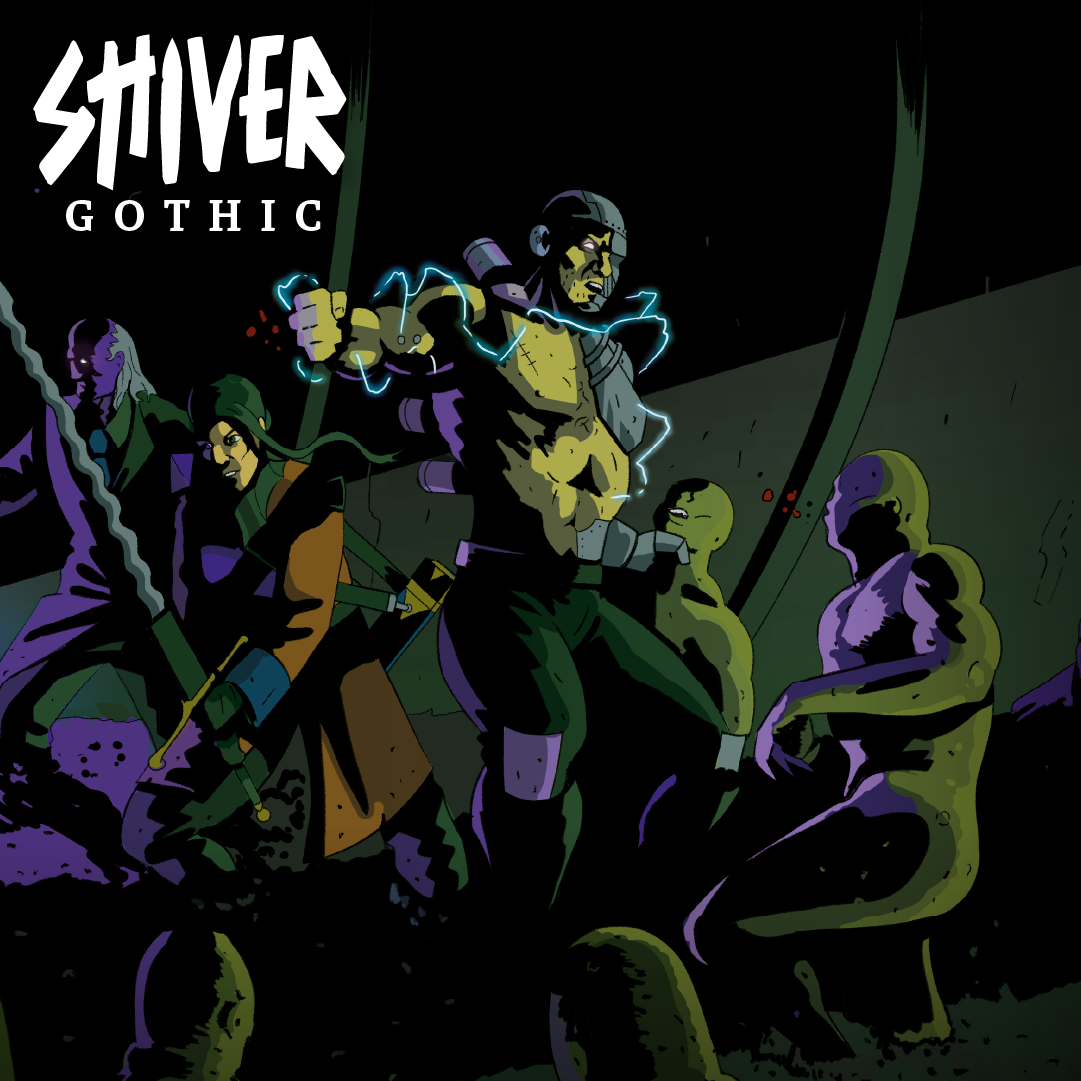 “Players take on the roles of archetypal characters found in stories across time and attempt to survive whatever strange and horrific things they may encounter.” Menzies explains. “Want to play your favourite horror movie and try to make better decisions than those on the screen? SHIVER lets you do that and then some, with space to make your own sequels and explore your favourite spooky and strange franchises.”

Of course, half the fun of such adventures is making almost exactly the same decisions as those on screen – yes, I will go alone, no, there’s plenty of battery left in my torch, that noise absolutely was nothing – a good chunk of giddy excitement comes from knowingly making horror film decisions, as opposed to a viewer hidden behind the sofa.

Thankfully, for those of us who grew up on Scooby Doo rather than Nightmare on Elm Street, “Horror is extremely broad”, Menzies says. “I’m not great with a super scary story”, he admits.

“One thing that I learnt through this project is that the definition of Horror is extremely broad. Jaws, Jurassic Park, Scooby Doo, all these titles fit within the Horror genre just not in the gorey axe wielding murderer way that maybe you see picturing a ‘traditional’ horror film or tv show in your head.

I much prefer to play a light horror comedy style story with a feel akin to films like The Mummy or The League of Extraordinary Gentlemen. Stories where monsters and darkness are present in the plot but not to an overpowering degree. But my brother will happily play with some diehard horror fans with gore and scares galore.”

In fact, the subsequent question of inspirations has come up frequently enough that Menzies has a prepared list of 24, including the likes of Nosferatu, Buffy the Vampire Slayer, Universal Horror Films, Castlevania, Bloodborne, and more.

“John Carpenter is one of the big influences on Charlie’s writing, you can definitely see this in The Lost Ship, a snowy arctic tale which pays homage to a certain famous one of his films.” Menzies does clarify though. “Our influences don’t just stem from film however, as you can likely tell from SHIVER’s artwork we’re also big comic fans. The works of creators like Mike Mignola and Alan Moore have also inspired us. We have hidden so many little references to things 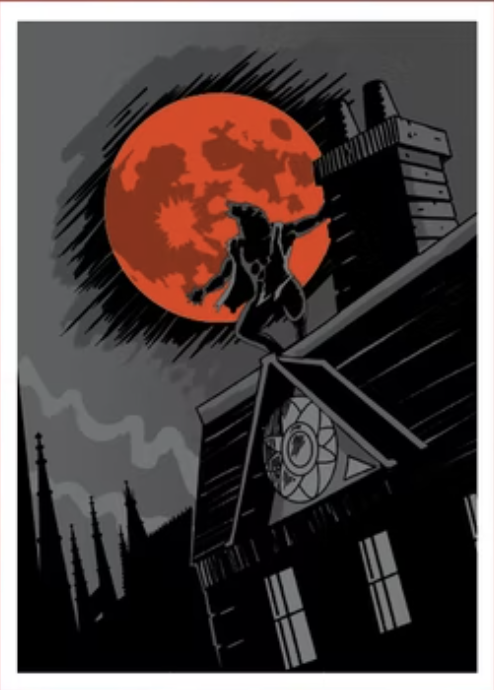 we love across the books and hope players have fun hunting for them.”

The appeal of the book is therefore much further reaching – you need not be a hardcore horror fan to enjoy, or have a desire to be part of a typical horror film to enjoy its plot possibilities. The book includes hints and tips on how best to reduce the scary horror if you prefer to, and even their actual play podcast live on their website sees one character take inspiration from ET rather than The Shining – with notably enjoyable artwork that never pushes too many boundaries for those who might be uncomfortable.

Indeed, instead of following the typical victim based format, you could always add in the amusing option Menzies himself took in one of his favourite moments during a playtest session.

“I had conspired with the Director of the game to have my character killed in the opening scene for dramatic effect. I then spent the rest of the playing as my deceased character's dog, barking at other players to try and give them clues like a very morbid Lassie. This also spawned some of the pet mechanics we later added to the game.”. Woof woof.

Parable Games itself is a brother duo of Barney and Charlie Menzies, who we met originally at an eye-catching stand at Dragonmeet 2021. In fact, it was Charlie’s idea to build a game that would bring together B-Movie Plotlines to the tabletop.

“He showed me what he had put together and asked what I thought, and I told him we should make it. We spent a while working on SHIVER as a passion project and during some playtesting sessions met Ben, whilst playing he was doodling some illustrations of what was going on in the game. We asked him if he wanted to join the project as an illustrator and with that final piece of the puzzle Parable Games was born. Over the first lockdown we used the spare time we had locked up inside to push the project over the line and release it on Kickstarter over that Halloween and the rest was history.”

Whilst you perhaps wouldn’t know from the polished book that emerged, their first foray into publishing was not without its challenges. As many come to find, it is experience that makes the process easier, something that the now trio of brothers and artist admit to having to pick up.

“There were definitely challenges,” Menzies acknowledges. “The first one being that no one on the team had really made a book before. Charlie had done plenty of writing, Ben had done some physical print projects, and I had worked with products and logistics within the games industry for quite some time but we didn’t have any specific publishing experience. We manage to overcome that with a combination of learning as we went and some very helpful companies that we worked with to get everything made and now we have some gorgeous books on our bookshelves as do our Kickstarter backers.

The other main challenge we ran into was the continued complications caused by changes to the global climate. Skyrocketing shipping prices, border delays, changes in tariffs, all this made the process of getting books, dice, and other things, to where they needed to be, much more complex.”.

A common story, as we hear of 400% increases, numerous creators sustaining significant losses on their projects in order to bring them into the country, and one for which there is no straightforward solution available. However, with a little to learn, the game came to fruition, and we look now to its very first expansion style book on Kickstarter, with SHIVER Gothic. 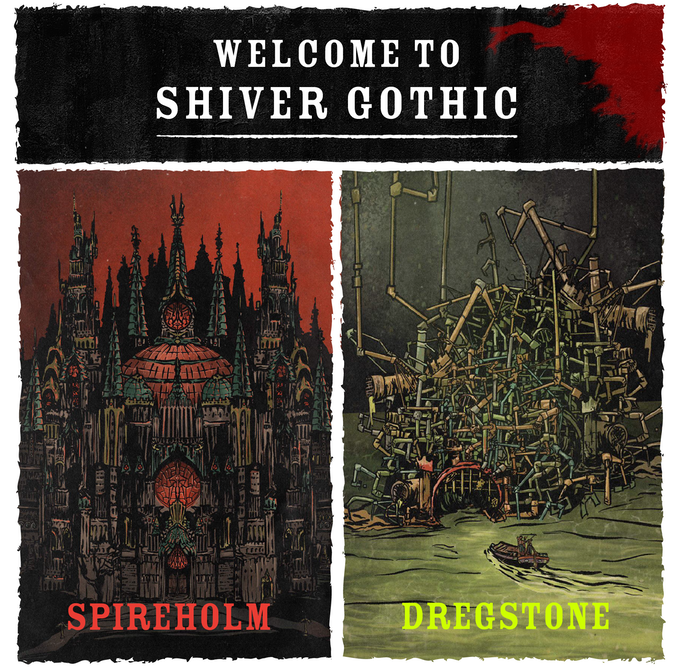 “In the original release for SHIVER we focused on showing how much of a horror Swiss Army knife the system was. We had sci-fi stories, we had Wild West stories, we had modern day corporate horror”, (the latter being apparently different to every day in a corporate environment).

“We wanted to show off what the system could do and focus on all the different stories you could tell over the course of a single session like a movie.” Menzies continues.

“With SHIVER Gothic we wanted to explore a specific area of the horror universe, gothic horror. We also wanted to take SHIVER and show how it could be used for long form story telling, moving tales to the realm of a multi-episode TV show rather than one off films.

We created the gigantic gothic city of Spireholm for players to explore along with a huge interweaving narrative and mystery to be uncovered within it. Giant spire covered cathedrals, moonlit cobbled streets, and the monsters of classic novels and movies populate the city along with many other gothic inspired terrors.

The new books in SHIVER Gothic will add rules for longer form story telling, including a Doom Calendar that will track the city’s fall into chaos depending on the actions the players take. Also featured will be new rules for taking on the role of a monster yourself. Ever wanted to play as Dorian Gray or Frankenstein’s Monster? SHIVER Gothic lets you explore these monstrous Archetypes through a range of new unique abilities and backgrounds.

“Gothic horror was also the top of our list for horror sub genres to explore as it is the one that most people associate first with the genre. There aren’t many people who when asked to name a famous horror novel that don’t name Dracula, Frankenstein, or another novel of the gothic persuasion.” 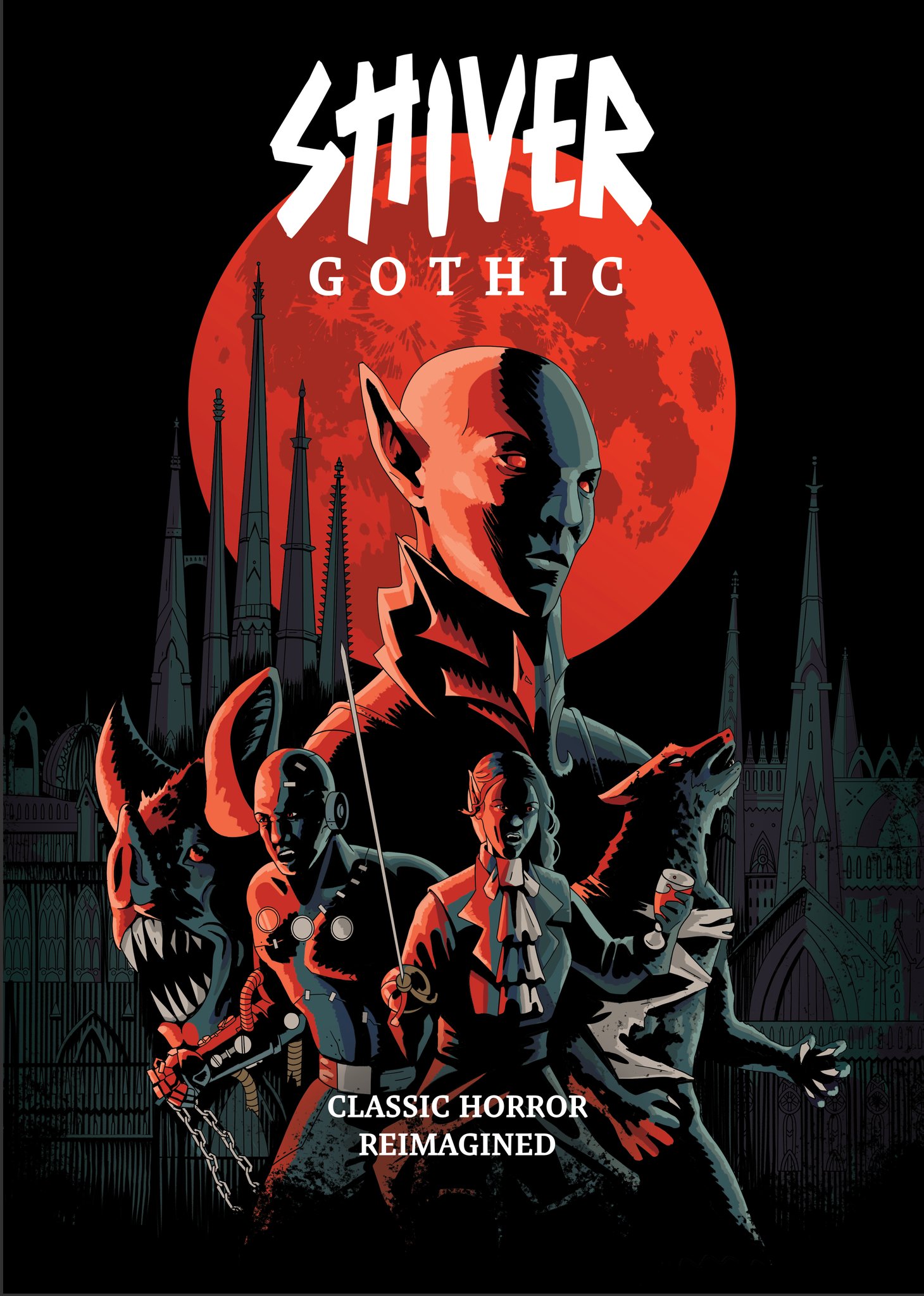 Whilst SHIVER Gothic is headed to Kickstarter, we have to ask if there’s more planned. Thankfully, the answer is a lot more.

“Gothic may be the first genre of horror we are exploring for SHIVER but we’ve also started working with an ever-growing pool of talented artists and writers who are going to help us delve deep into other horror genres going forward. As for other projects, we have some other things we are working on that are separate from SHIVER but we’ll be keeping those hidden for now…”

If you manage to pull yourself out from behind the soda though, you can meet Parable Games over at Tabletop Gaming Live 2022, our huge celebration of Tabletop Gaming taking place in Manchester in September – if you’ve not got your tickets, be sure to pick those up soon! – or more imminently, over on Kickstarter, where you’ll find SHIVER Gothic running until 31st March 2022.