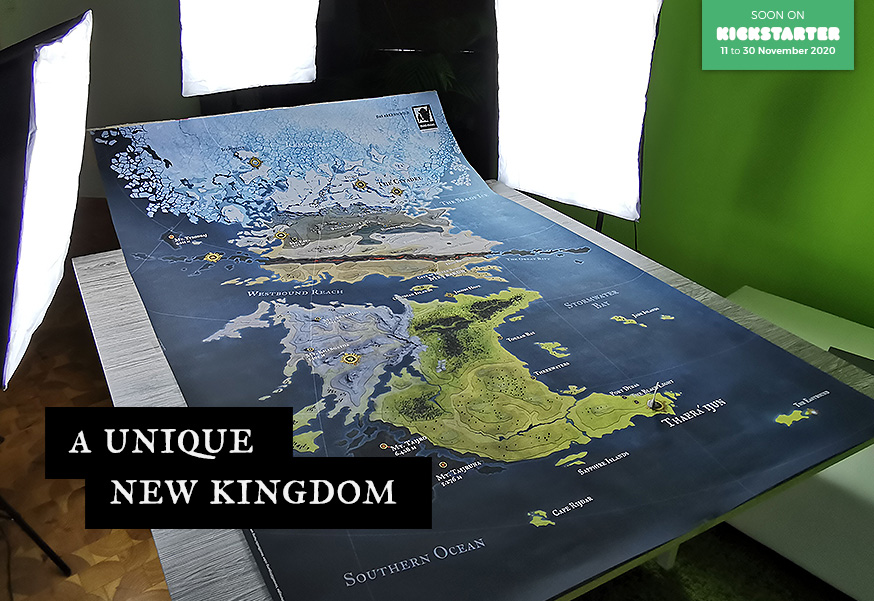 While travelling the great oceans of Taphao, famous sailors have made legendary discoveries. All their records of lost kingdoms and their amazing secrets have been written down in the Terrae Encyclicae – the Book of Taphao.

The major regions of Taphao
Southern Kingdom
While Taphao’s other regions have decayed and turned into deserts of stone, salt, or ice over the millennia, this area, the green heart of the continent, has remained largely untouched and is covered with forests, rivers, and endless grass plains. Enormous mountain ranges extend to the horizon on its western side. If you travel further south for many weeks, you will reach Thaera´Ijun, the largest city on Thaera. This is the Alliance’s power center and it holds the Green Throne of Daerion.

Western Mountains
No one has dared to enter the Outer Country (as this remote territory is still called) since the time of Daerion, because a huge granite barrier blocks the entrance to its world of rock and stone. The untamed wilds beneath the rugged peaks of Mount Khangatoa and Mount Anakaijma command the land.

The Island Confederation
Together with their allies from the Rijðar Archipelago, the Obsidian, Sapphire and Jade Islands, this loose confederation of seafaring nations dominates the trade in rare minerals. The barons of the Eastbound Islands lead these nations, and their gold and an invincible fleet give them a powerful influence over this world’s destiny. None but they still possess the craftsmanship to produce runes and artifacts.

Westbound Reach
If you follow the road to Jacobs Hope from the south, you will discover a huge natural obstacle on the horizon: Westbound Reach. This world-stream stretches in an almost west-east direction and marks the border between the Alliance and the Fallen Empire, the two great enemy camps. If you cross the straits, you will find a last sanctuary on the Obsidian Islands. Only death and despair lie in wait beyond them.

The Great Rift
Fires bursting their way from the planet’s core to the surface give this deep and impressive abyss its special significance. The Northern Land clans‘ priceless obsidian deposits lie here at the edge of the Great Salt Desert. Anyone wanting to attack the Citadel must first pass these mines and their fire-forged outposts. The Iron Blades offer the only way across.

The Tarvagataij
When the Great Rift developed, a huge basin named the Tarvagataij formed to the north of it. Mud turned to clay, clay turned to sand, and sand turned to dust. Searing light, sudden storms, and relentless heat make any attempt to cross this area a journey of no return. It stretches from the Great Salt Desert in the south, across the Dead Plains and far north to the Nowhere Trail, and the Swamps of Tarva (a vestige of its beginnings) lie in between.

The Northern Territory
This is a cold and desolate place. A fortress built of dark magic sits high amid inhospitable, soaring giants of ice. Everything that the Fallen Empire plans and executes begins here. War drums and the growling of beasts of insatiable power reverberate between the mighty Citadel’s crumbling walls.

White Infinity
You will lose yourself in the White Infinity if you venture out onto the ice alone. Icemoon Bay is larger than all the rest of the land mass and is not just the scene of an eternal contest of the tides. The Úlfur, an evil being from ancient times, lies deep under the ice.

Black Soil
The souls of the damned from a lost crusade burn on the black fields of a ring of fire. Besides Mount Tyrongaj (4,211 m) and Mount Taijruna (5,276 m), Mount Taijro, the 6,428 m high king of the mountains far in the south of Thaera, has an even darker side. It is the gate to a long-forgotten world.

The Dark Waters
The far side of the planet is shrouded in total darkness and no one has ever ventured there. It is rumoured that the mythical kingdom of Aterosian, whose existence is mentioned in some ancient Thegean inscriptions, lies there. No one knows whether these dark secrets will ever be revealed. 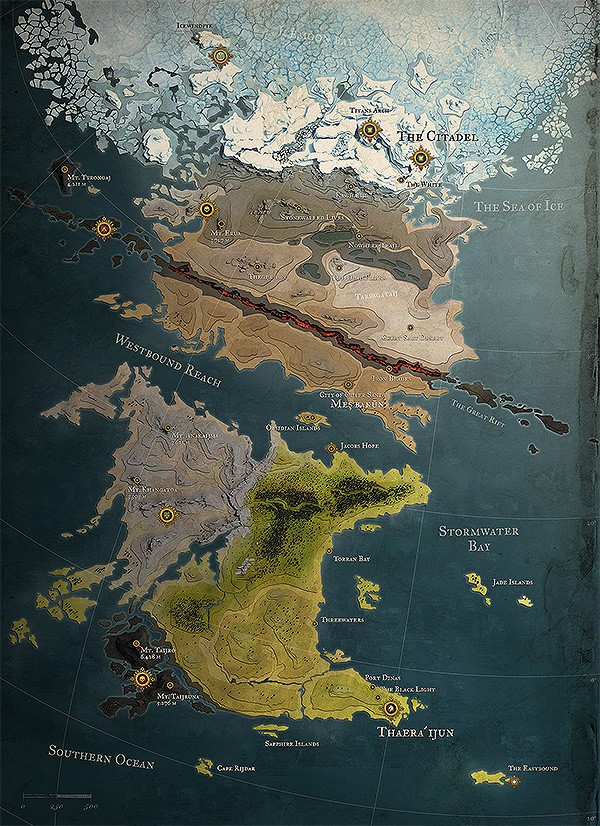