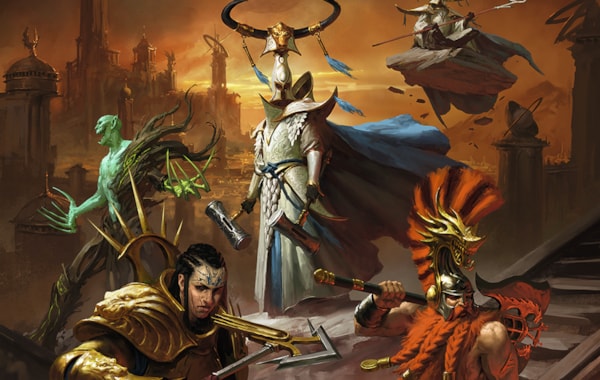 We Could be Heroes

The first major expansion for an RPG can often signpost the designers’ hopes for its long-term future. Assuming this holds true for Soulbound’s high-powered fantasy heroics, Champions of Order points towards a game that’s less concerned about shaking up the status quo and more about giving the players more of what they want, both in and out of battle.

The book itself is a relatively slim affair, coming it at a modest 150 or so pages. However, within that space the designers over at Cubicle 7 have rammed in an impressive amount of fresh player-facing content.

Perhaps the most headline-grabbing of this is the ten or so character archetypes – essentially the Soulbound equivalent of the classes found in other RPGs – which are divided up pretty evenly between the existing factions from the core rulebook and the brand new Lumineth Realm-Lords. The newcomers are all fun expansions to the list of possible heroes, and often delve deeply into what makes their particular faction feel special. The Khainite Shadowstalker, for example, takes the idea of moody, murderous elves and spits out an entire archetype of super-assassins with the ability to teleport through shadows whenever they feel like it.

The newly-arrived Realm Lords, on the other hand, give players a chance to try out Soulbound’s own take on high elves. The result is a rather complex faction that blends might with magic, and arrogance with fragility. Among their new options, perhaps the most interesting is the chance to play as a Scinari Cathallar – one of a group of spellcasters who place more of a focus on maintaining their comrade’ emotional stability than zapping their foes. Perhaps they don’t fit in especially well with Soulbound’s general aesthetic of burly warriors and endless battle (and, to be honest, that name is a bit of a mouthful) but they offer a route towards some simple, deep roleplaying.

Of course, new heroes aren’t all the book has to offer. The rear half of the book takes in long lists of new talents, miracles and spells for characters to learn. And we really do mean long. By a rough count, the number of talents that players can pick in Champions of Order is one par or even a little bit higher than the core rulebook, giving a rather incredible boost to the ways that you can build and grow characters.

Alongside all these updates, Champions of Order rather casually introduces a rather significant new aspect to the character creation rules. From now on, every freshly created character is given the option to pick a sub-faction that represents their origins in the Mortal Realms.

This seemingly minor choice comes packed with both some interesting lore implications and a couple of new abilities that can end up being surprisingly powerful. Indeed, the very first sub-faction bonus in the entire book, the Lumineth city of Ilatha, gives you the ability to create a magical doppelganger of your hero, with the understanding that if they take an axe to the face their clone can simply slot into their place without any of the usual disruption caused by a dead hero.

It’s a neat little sub-system that feels especially useful for helping you ground heroes in a setting that can sometimes struggle to feel tangible and lived in. Something as small as getting a boost to your starting cash because your Fyreslayer hales from the notoriously mercenary Greyfyrd Lodge can help to build a character that feels distinct from the usual grumpy dwarf tropes.

Perhaps it’s a little surprising to see a fairly new rule added onto a game that’s been out less than a year, but so long as they don’t keep stacking up as new releases come out it’s hard to be annoyed by the addition of more options onto a game all about making cool and powerful characters.

If there’s any flaw at all, it’s that the book lacks any kind of theme or through-line. It’s not a product that is going to take your established campaign and allow you to throw an enormous twist at your players, but rather one that offers more of what you already have.

Honestly, though, it says a lot about the general quality and sheen of Champions of Order that this rather paltry criticism is the best we can offer. Sometimes, all you want for a game is a pile of cool options and new toys to play with, and that’s something this book has in spades.

TRY THIS IF YOU LIKED Soulbound

Not the most subtle comparison, but the only one that makes sense