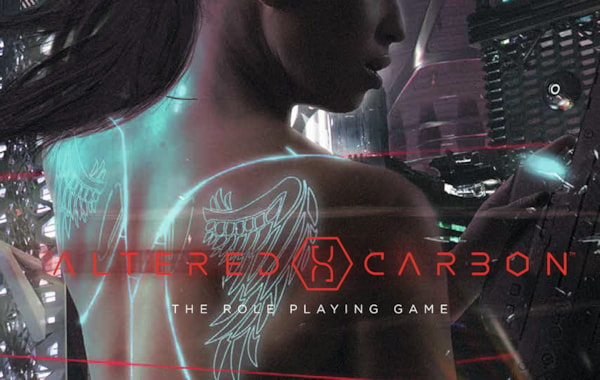 There’s something cool, elegant and deliciously dangerous about Altered Carbon’s cyberpunk-noir vision of the future. However, while this adaptation has cunning ideas and sleek presentation going in its favour, a choppy ruleset and some frustrating design decisions keep it from hitting the mark.

Based on the Netflix series of the same name, as well as the Richard Morgan novels, Altered Carbon is a deeply detailed game of futuristic intrigue and razor-sharp violence. It creates a system that loves to tinker with imagined technology, and while it never hits the complexity of cyberpunk stablemates like Shadowrun, the 300-odd pages of the core book are packed with plenty of whirring rules and sub-systems.

One of the core conceits of the setting is that every single person has a tiny stack of electronics wedged into their neck, digitising their personality and memories, and storing it on the titular slabs of carbon. If somebody dies – or simply wants to transfer to a new body – you can rip the stack out and stick it in a fresh ‘sleeve’.

This has some weird and wonderful implications for our body-hopping heroes, such as making high-lethality combat not a particularly big deal. The GM can toss characters off rooftops and launch missiles at them and not have to worry overmuch about the campaign suddenly stalling because half the party got mulched.

On top of this, it means that a fair few of your character’s stats are tied to their sleeve, rather than their personality. If you suddenly find that you need a big, strong bruiser in the party, it’s possible to pool your cash and get hold of a tricked-out combat sleeve for one of your characters to download themselves into.

Another tick mark in the game’s favour is the emphasis it places on making contacts and dealing in information. ‘Influence Points’ are a currency and having somebody on the team with solid contacts and a winning smile is just as important as making sure you have somebody who can shoot.

Together, these elements set Altered Carbon up for a solid cyberpunk experience that manages to feel distinct and exciting. However, when you get to the table and start to play the game, things quickly gum up.

The rolling that makes up the core gameplay isn’t too bad, but it’s all very confusingly arranged. Characters want to roll low, but bonuses to their chances are still expressed as positive numbers. And these bonuses must be kept entirely separate from attribute bonuses, which are derived from elsewhere and never actually get added to anything (as, for example, a bonus), but are rather used to determine target numbers to roll for. But only if the GM feels like it, otherwise you use a system that’s kind of guesswork. Honestly, it’s kind of a mess.

Once you wrap your head around things it all rattles along reasonably well, but there’s one hell of a learning curve. It genuinely took our playtest group around twenty minutes to try and work out how to shoot somebody.

Perhaps we were just being particularly slow on the uptake, but it doesn’t help that everything is thoroughly muddied by an over-reliance on a library of symbols that represent almost all the major game concepts. Using symbols to represent common concepts isn’t an inherently bad idea, but it does rely on players being able to A) distinguish between them at a glance, and B) easily look them up.

Altered Carbon whiffs both of these tests. About two-thirds of the symbols are grey blobs that can be impossible to tell apart if you’re reading on a mid-size tablet or laptop screen, and the explanations of what they mean are spread out over more than 100 pages of rules. There are a lot of cool ideas baked into the system, but playing it is an absolute chore.

One final, damning, piece of irritation is that the game sticks by the old, awkward assertion that using a prosthetic somehow makes a character a little less human. Infuriatingly, the designers even acknowledge that some cybernetics might be medically necessary. They note that under these circumstances, you can reduce the damage that having a prosthetic fitted inflicts on your character’s ego to a mere 1d6. How very generous.

There are some great ideas and beautiful design on display, but the game is ultimately a disappointment

TRY THIS IF YOU LIKED Shadowrun

If you can handle Shadowrun’s rules, Altered Carbon shouldn’t be too much of a stretch