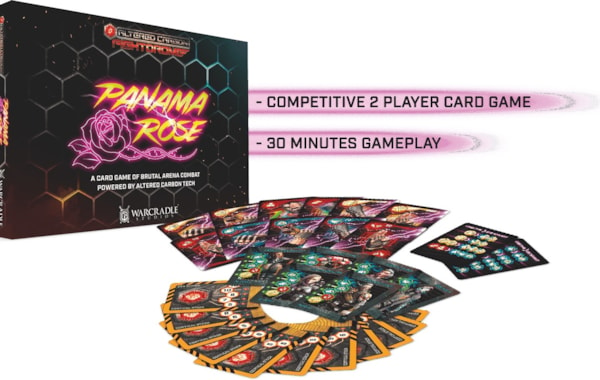 In Richard K. Morgan’s cyberpunky Altered Carbon future, cage fighting takes on an amped-up twist, with competitors’ cortical ‘stacks’ uploaded into burly, smash-happy ‘sleeves’ (specially-bred bodies), to allow for maximum brutality. And now this pugilistic aspect of Morgan’s novels (and the Netflix show on which they’re based) has been adapted into an appropriately lean and punchy card duel game.

The stack/sleeve aspect comes into play with the setup deck-construction: a random combo of stack and sleeve gives each player a different load-out of punch, kick, grapple, block and powerful ‘neurochem’ cards. Although, in truth, there’s not sufficient variance between the cards themselves for your deck to feel particularly distinct; it feels more like an illusion of asymmetry, with a noticeable lack of unique character abilities.

The majority of the melee action is essentially trick-taking: play a punch, kick or grapple attack of a certain value, and it has to be matched or beaten by a returning punch, kick or grapple – unless a matching or higher block is played instead. Successful attacks and counters allow you to draw a replacement card – which is important as your seven-card hand represents your health – but if you throw down an appropriate, neurochem-attack trump card, you won’t be allowed to draw.

If you can’t play a valid card, you’re ‘staggered’ and have to discard another card face-down. But when an opponent is staggered, you at least have the option to rest and draw a new card instead of pressing your advantage. The first player to empty their hand loses.

It’s quick-paced and simple to learn, but it doesn’t exactly beg you to come back for more. If you’re looking for a great combat-simulating card game, it’s no match for the Roman-themed Gladiatores.