What can romantic board games (and tentacle sex) teach us about real-life relationships? 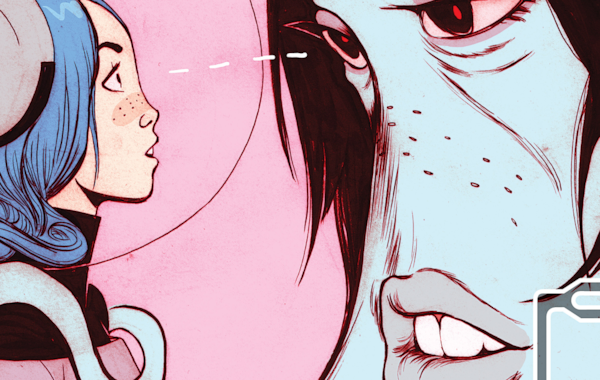 Play with your heart

Let us travel back to the early 2000s, when games like Mr & Mrs seemed like the perfect activity for any couple looking to giggle over a glass of wine. Or let’s not, because answering trivia questions about your partner’s favourite tea biscuit is boring and doesn’t exactly encourage players to say anything meaningful about their relationships, or relationships in general for that matter.

With players falling for games like Jacob Jaskov’s Fog of Love and Naomi Clark’s Consentacle in recent years, we could be witnessing a new era of relationship games with substance. But can board games actually teach us anything tangible about relationships, or are they doomed to remain shallow after-dinner distractions?

Clark started designing Consentacle in reaction to another Kickstarter project about tentacles, one that had been boycotted and eventually removed because of its harmful approach towards sexual relationships. As both a personal challenge and a statement about the importance of consent, she transformed a previously problematic scenario into a game promoting the exact opposite; in pairing the words ‘consent’ and ‘tentacle’, Consentacle instantly stands out as a game that’s eager to prove that ‘kink’ doesn’t mean ‘gross’.

“I believed that the concept could be reclaimed and turned around; Consentacle is not what people expect from a game with tentacles in it,” she asserts.

Jaskov took an equally considerate, if not quite so politically charged, approach to designing his relationship roleplaying board game Fog of Love. The designer wanted to create a game that took its subject matter seriously, so he ensured that he did the proper research before starting the design.

“I needed to better understand how love and relationships worked, so I read a lot about it,” he says.

But Jaskov also wanted his players to have fun with the concept, and so looked into how romantic comedies depicted relationships for lighter ideas.

"Consentacle is not what people expect from a game with tentacles in it."

The desire to balance serious discussion with humorous ideas is one shared by both Fog of Love and Consentacle, where players are encouraged to act less seriously but think intelligently.

The bizarre premise and ludicrous game modes presented in Consentacle are in perfect contrast to its central themes of trust and communication. Players must aid Kit the human and Dup the alien in exploring their new and exciting interspecies relationship, revealing cards with matching combos to collect ‘satisfaction’ tokens.

Players need to communicate with one another to ensure that they can perform the most useful actions that round. But playing on certain difficulty settings, such as one where you can only use sounds and gestures, means communicating often ends in hilariously disastrous consequences. At the same time, players can choose to opt out of any action by ‘withdrawing consent’.

The exchange of trust is crucial, as the only way to obtain any satisfaction tokens is for both players to pool their trust together. Clark intentionally combined elements of social commentary with pantomime and aliens to help players feel more comfortable with discussing sensitive topics.

“The game serves as a space where you can explore these themes without having the consequences of real life,” she explains. 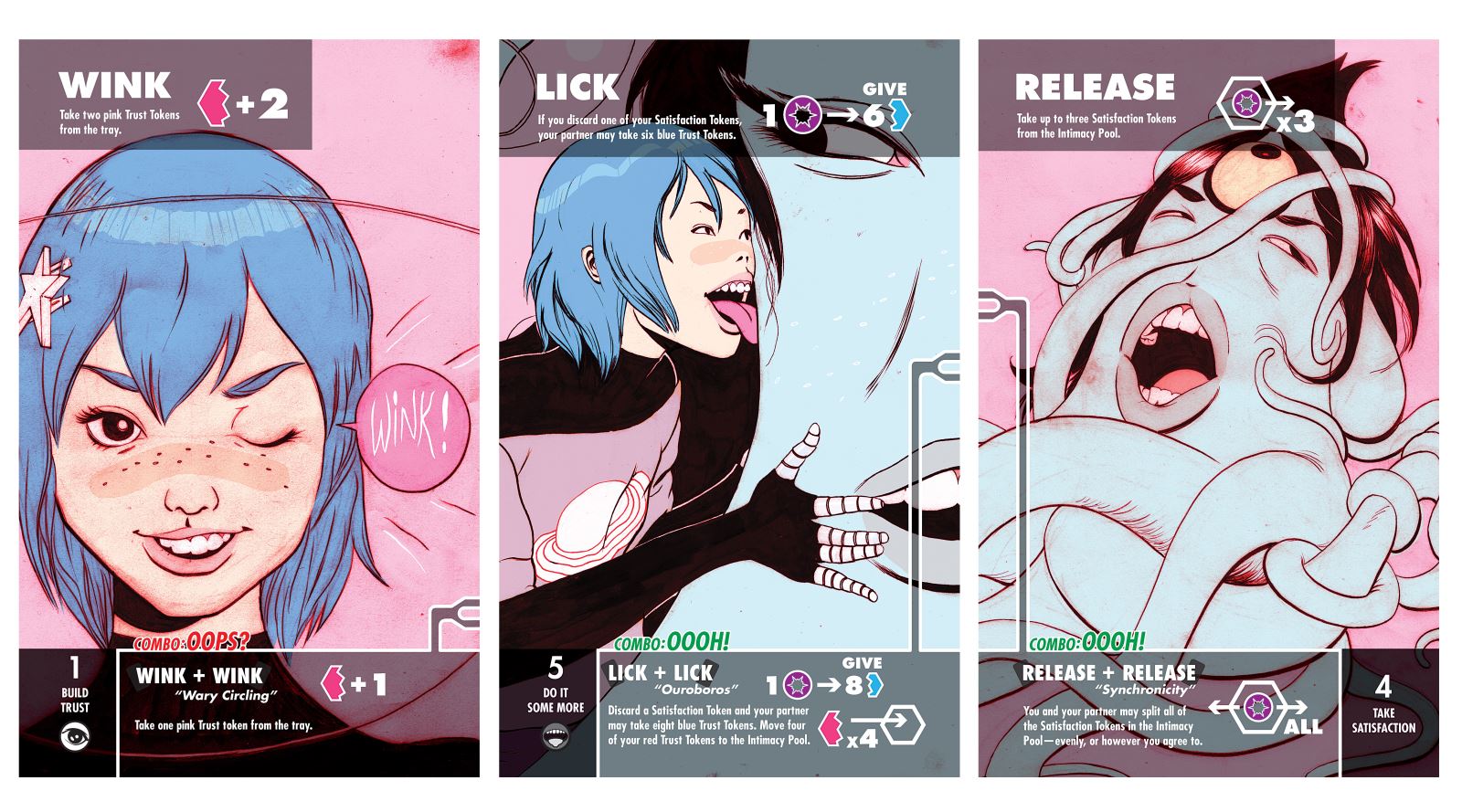 Some of the cards from Naomi Clark's Consentacle: a game as clever as it is kinky

Whilst Consentacle uses absurdity to ease its players into interacting with the themes of sex and relationships, Fog of Love learns further into the mechanics of roleplay and humour.

In Jaskov’s game, players create their own characters using a random collection of traits, before guiding them through a pre-set storyline. In each of three chapters, players take turns playing story cards and decide how they will respond to each event. Certain responses enable players to perform corresponding actions, whether that’s placing tokens into one of six different personality traits or gaining/giving satisfaction tokens. Ultimately, players want their characters to achieve one of several destinies they can choose to pursue, from sharing unconditional love with their partner to a mutual breakup.

Jaskov worried that including emotionally potent situations like confessions of love or betrayal could potentially prove too heavy for players, which is why he also included comedic event cards as a form of icebreaker. He believes that it’s this combination of sincerity and gentle hilarity that makes Fog of Love such an approachable experience.

“It opens the way for some deeper conversations and provides an opportunity to reflect on yourself.”

"The game serves as a space where you can explore themes without the consequences of real life."

Conversation really is the name of the game when it comes to both Fog of Love and Consentacle.

When designing Consentacle, Clark felt inspired by how competitive games included mechanics around the withholding and exchange of information. Understanding how your opponent thinks and anticipating what their next move reminded her of how people sometimes dance around each other in relationships. Forming that understanding doesn’t just develop a relationship between Kit and Dup, but also helps to build the relationship between you and your game partner.

My experiences of playing Consentacle, especially where speaking wasn’t permitted, were filled with silliness and sincerity in equal measure. As we flailed and gestured to one another, we gradually created our own unique language, known only to us.

Where Clark was inspired by competitive mechanics, Jaskov was more interested in co-operative ones, feeling that most collaborative games did not focus enough on relationship-building.

“Trust is just assumed; it’s more about players’ ability to co-ordinate than about their relationship,” he observes.

In Fog of Love, players’ traits and destinies will not always align with each other, but you’re nevertheless encouraged to find ways around these differences. Even though the game allows for players to ‘win’ in other ways, Jaskov wanted people to at least try the co-op method because thinking about your partner’s needs is important.

“Love is about give and take, it’s a positive economy,” he says. “Those who try to make it work despite everything can have some amazing experiences.” 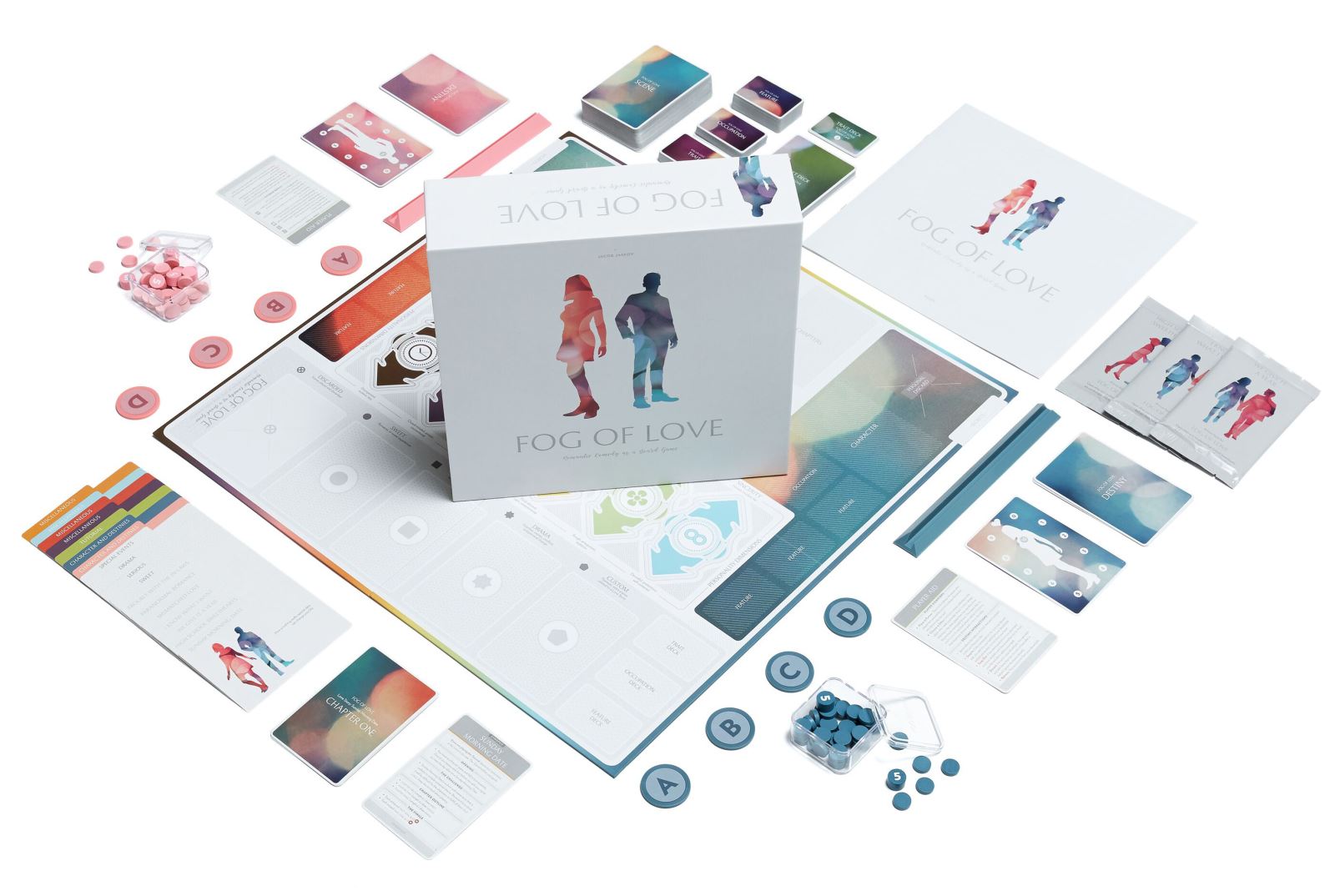 The lessons taught by Consentacle and Fog of Love – that relationships require trust, communication and understanding – are effective enough that people are using them to guide their own relationships. Both games are even regularly played by the hosts of a relationship advice podcast called ‘Pod of Love’. Their success is a result of an ideal compromise between the social party-game approach of games like Mr & Mrs, but with a genuine desire to say something meaningful.

Jaskov mentions he’d heard about a young man with autism who’d been using Fog of Love to help him better understand how relationships were meant to work. It goes to show that games can provide a very accessible social platform to talk about sensitive topics with others, which is especially important for those people who might otherwise be confused or afraid about sex or relationships.

In the end, sometimes we just need a little silliness to talk about how we really feel.

This article originally appeared in the November 2018 issue of Tabletop Gaming. Pick up the latest issue of the UK's fastest-growing gaming magazine in print or digital here or subscribe to make sure you never miss another issue.