Yeti In The House Review Confetti or a drop off a jetty for a Yeti game that’s so petit?

The lockdown, which is ongoing as I write and probably will be when you read this, has forced us into some strange places and made us think about familiar surroundings in different ways. Here’s a game that can turn the smallest of homes into a playful space with wit and charm.

Yeti In The House isn’t new but it may be the perfect game for the days of the virus. It’s from Itten, the Japanese studio best known for Tokyo Highway, and which has a reputation for games that combine nice components and clever tactics with a physical element of play.

Yeti is the smallest boxed game in my collection. Not the smallest overall (that’s Monsters Den, a cave-escape game on a single card from XV Games in Italy) but it’s still small enough to lose easily. It was originally created for the Is It A Game? festival in Japan in 2018, an art event exploring the boundaries of where games start and end, and while it’s definitely a game it pushes the definition of what you can sell as one. If you hated The Mind because it wasn’t gamey enough for you then turn the page now, there’s probably something with cubes and scoring tracks waiting for you there.

It’s got four pieces. Four. Nice bits of smooth white wood: mountain, yeti, and two footprints, which together fill the half of the box that isn’t taken up with packing material. It doesn’t have a board: your house is the board. The box itself is an artisan-like grey card with copper staples and white lettering. If you thought Oink games were stripped back and minimal, you ain’t seen nothing yet – which is appropriate, because this is a game about seeing things, or not 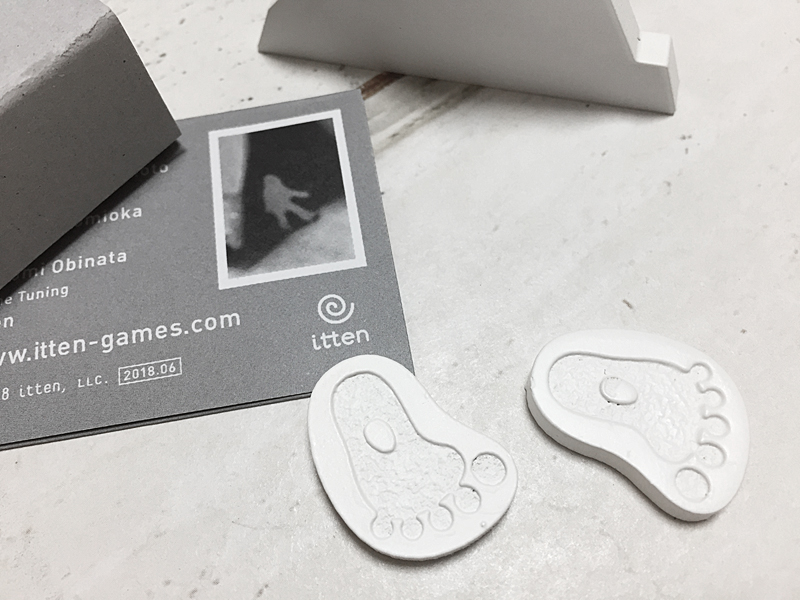 Players form two teams. One (the ‘Search Squad’) places the mountain somewhere in the room, and then goes out. The second team hides Yeti in a spot visible from the mountain, and takes a blurry photograph of it with a phone. You’re actually encouraged to use filters to make it more grainy and de-saturated, to resemble classic cryptozoological photos. Then you hide the two footprints in places that someone studying the picture might mistake for Yeti’s hiding place, and call the Search Squad back.

The searchers, positioned by the mountain, have to work out where Yeti is hiding based on the photo. When they think they know they can go and check, but if they find a footprint there then they lose. If there’s nothing, they keep trying till they’ve located a piece. Then the teams swap over, the mountain is moved, and it starts again.

It’s micro-hide-and-seek, except the fact it’s a Yeti and mountains somehow transforms the game and its indoor landscape into a strange new terrain. Could the photo be Yeti hiding in the yucca plant? Behind the gin? Sellotaped to the lampshade? Neither the concealing nor the finding are as easy as they sound, and as both teams become increasingly devious and giggly the tension ramps up to a delightful peak.

Yeti is a unique offering. On the other hand it’s a tenner for four components and some simple rules, and you could easily improv your own copy out of stuff. On the third hand – we’re talking about Yetis – the game is so quirky and charming that a knockoff is never going to give you the same experience or the same pleasure. And how many other games will have you yomping around your kitchen yelling ‘IT’S IN THE TWIGLETS I’M SURE OF IT’?

Next time someone asks you what’s the best game for lockdown, you know what to tell them. Yeti in the House, your time has come.

Yeti in the House is as simple as a folk-game, and with the same enduring pleasure. I can tell you from personal experience that real cryptozoological expeditions are a lot duller than this.

TRY THIS IF YOU LIKED: Hide and Seek...

It’s a one-off, I can’t think of another published game like it. Itten does have another micro-game about legendary beasts: Nessie’s Identity, but that’s even harder to find.