Birds are inspiring creatures. The nightingale spurred Keats to write it an ode. The kestrel compelled novelist Barry Hines to pen A Kestrel for a Knave. And without the condor, we never would have got, er, ’80s Michael Crawford-starring action comedy Condorman. Now we have Wingspan, from designer Elizabeth Hargrave and Scythe maker Stonemaier Games, which brings a sense of feather-fine avian grace to the tabletop. And, thanks to its impeccable execution and bar-raising visual design, it’s fair to say it’s closer to Keats than Condorman.

Wingspan sells itself as a “competitive bird-collection, engine-building game”, but it’s a far more sublime experience than that rather functional sum-up suggests. Yes, it’s competitive, but it’s one of those Euro-stylers where you feel more like you’re playing with your competitors than against them. It’s not very swingy, there’s scant take-that and you won’t have any reason to get pissed off by your opponents’ tactics, beyond expressing envy at the sweet card synergies they may have pulled off.

And yes, it’s an engine-builder, but what you’re building here is something pleasant, peaceful and organic: namely a welcoming environment for birds to come and hunt, feed and nest, as depicted by its large, gorgeous player boards. Each turn, you select one of four straightforward actions: play a bird card down to your board, by paying the right food-token combo and obeying the bird’s habitat restrictions; gain food, by selecting one or more rolled dice from the lovely, self-assembled birdfeeder dice tower; lay eggs, by taking some delicious-looking (but in no way edible) egg miniatures and placing them on your bird cards; and draw bird cards, either blind from the deck or by choosing one of three elegantly fanned on a moulded plastic ‘bird tray’.

For any action other than playing a bird, you then activate any placed bird cards in the relevant habitat, one by one, from right to left. If you’ve been careful with your placement, then you’ll be joyfully executing those aforementioned envy-inducing synergies. If not, it’s just fun seeing how things have worked out and what you can gain. Besides, your placement tactics may have been driven more by achieving your hidden end-game bonuses, or going for the randomly selected end-of-round bonuses.

Wingspan’s lack of hard-edged strategy and direct player interaction sounds like it might start to turn dull, but this is never the case. Hargrave has calibrated it so each turn passes quickly, while you always feel engaged with what other players are doing. You might be keeping track of how their habitats are developing. Or quietly hoping they don’t take that food die you were banking on nabbing. Or just listening to them read the bird fact at the bottom of the card they’ve just played; it really is a learning experience.

There are many great games out there, but there are few you can honestly say feel perfect. Wingspan is one of those few. Looks-wise, it is a work of art. Play-wise it is a gently absorbing and genuinely relaxing dream. Theme-wise it feels as original as it does universal. It’s hard to imagine anyone who wouldn’t enjoy playing it. It is simply inspiring.

Appropriately enough, Hargrave’s game is a soaraway success. It will appeal to casual gamers as much as hardcore players, and if there is any justice it’ll become the big crossover hit of 2019. 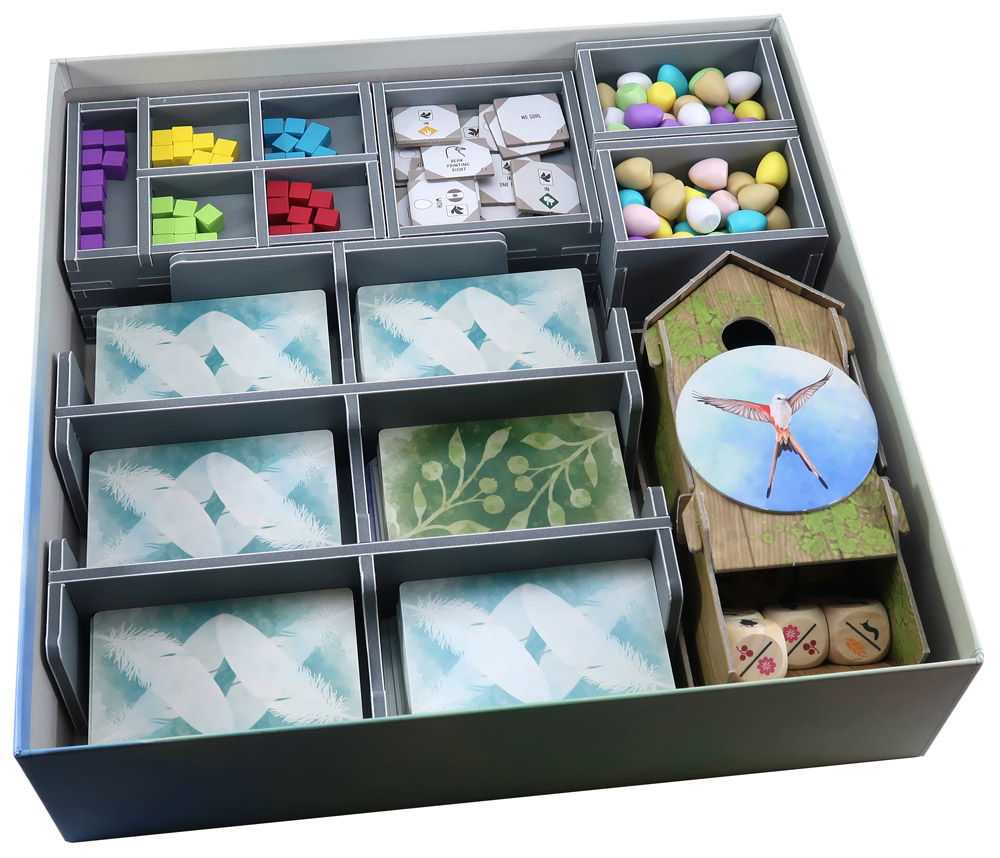