Martin Wallace’s Wildlands is the gift that keeps on giving. While none of its numerous expansions are required to appreciate its fundamental brilliance, each has complemented the base game well, bringing in new player factions (our personal favourite is the fantasy-classic Adventuring Party) and new maps. It even spawned a sister title, Judge Dredd: Helter Skelter, which satisfyingly switched the sword-and-sorcery setting for a massive 2000AD character mashup, with just a few rules tweaks. Of course, games ain’t cheap, so perhaps you’ve been holding out for an expansion which feels truly essential. Well, we can now happily confirm that The Ancients is that expansion.

First and foremost, it introduces a solo mode. This isn’t actually the first time that Wallace’s slick, card-based skirmish system has offered solitaire play, but given you’d have to have purchased both Helter Skelter and its Dark Judges faction pack to access it (and it only works if you face Judge Death and his extra-dimensional cronies), it is overlookably niche.

What we get here is a properly accessible, full-on solitaire rule set, complete with five scenarios of varying trickiness. The difficulty levels are not made clear (a small complaint), so we’d advise starting with “Greed, Gold and Goblins,” which pits you against a bloated ogre tyrant and his comfortably killable green-skinned followers, and saving “Elemental Power” – wherein you face the weirdly elephantine Magus – as your final, bastard-hard challenge. 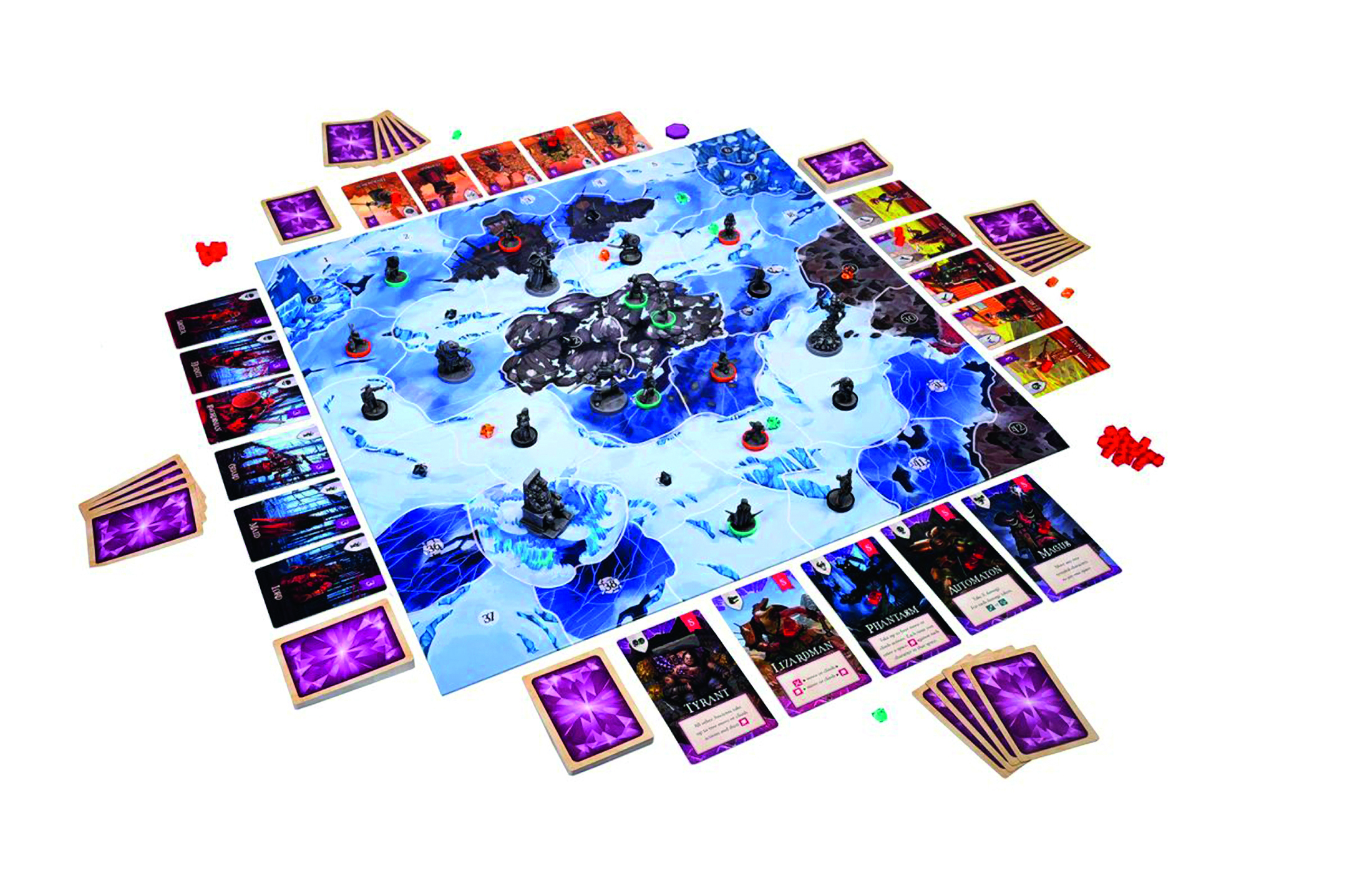 Given Wildlands has always been about thoughtfully maximising the effect of each and every card in your hand through the careful execution of combos, knowing when to conserve your team’s energy and when to go all-out, it lends itself perfectly to the solo experience – rather like the similar Mage Knight and Gloomhaven, though this game benefits hugely from its pacey game play and unconvoluted setup. The puzzle in your hand translates beautifully into dramatic miniature-based combat-quest action on the board, as you must either find all the hidden power crystals before the scenario tracker reaches its end, or slay whichever of the five big-boss Ancients you’re facing, each with their own decks of action and minion cards (the minions are represented by square tokens rather than miniatures, but we’re not complaining).

The solo mode, aka “The Awoken”, is also designed to work as a neat, two-player co-op (in which you must face a pair of Ancients), but that’s not all you get. If you’re playing with others and fancy letting someone take on all the Ancients as a beefy player faction, then that’s allowable via “The Wrath of the Ancients” variant. (Yes, these monstrous gits are much tougher, but they also have a tougher win condition.) Then there’s the almighty “War for the Crystals”, which expands the game out into a five-or-six-player team game, though you’ll need either the Adventuring Party or Unquiet Dead expansion factions to make it work with six.

But the heart of The Ancients’ appeal is in the way it finally allows Wildlands fans to properly play the game on their own. After all, a party of one can still be huge fun.

A great expansion to a great game, giving it a welcome, boss-slaying quest feel. We always suspected Wildlands would be a blast to play solo, and this finally proves it.

Previously this was the only way to play the system solitaire, and The Ancients does it much better.