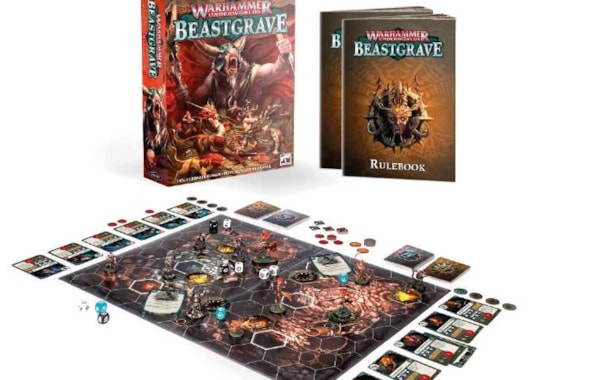 Miniature mayhem that offers a bounty of beastly butchery

In the Realm of Ghur lies the terrible land of Beastgrave, a place of predators and bones and rock. At the centre of this land, brooding like some titanic god, is the mountain. Vast and malevolent, warbands find themselves drawn to it like moths to a flame, there to do combat in the depth of the mountain’s labyrinthine tunnels. But now a new terror, a curse from the city of Shadespire, has spread its tendrils to this unhallowed region, awakening the dead to once more pick up their arms and fight in endless conflict.

Beastgrave is the latest iteration of Games Workshop’s Underworlds, a miniatures skirmish-cumdeckbuilding game set in the Age of Sigmar universe. The game pits rival warbands of roughly half a dozen figures against one another on a hex
board. In addition to the miniatures, players arm themselves with a deck of cards consisting of upgrade, ploy and objective cards used to buff characters, perform some special effect or achieve glory points respectively. Some of these cards are universal, whilst others are specific to a given warband, and much of the appeal of the Underworlds series lies in creating strategies and tactics by putting assembling and optimising your deck. This time round, the box features a band of Sylvaneth (aka wood-elf) hunters against a pack of Chaos-worshipping beastmen.

Beastgrave builds on the solid formula that has made Underworlds so popular, offering gameplay that’s fast, bloody and rewarding. The factions – each with enough cards to make an entirely factionspecific deck – feel balanced against one another. Skaeth’s Wild Hunt favours speed and hit-and-run tactics, whilst Grashrak’s Despoilers reward a mixed play style of objective-hunting and foe-slaying.

Beastgrave introduces several minor but important tweaks. The guard action –
which can be used to increase a fighter’s defence – has been buffed, meaning that figures won’t get driven back a hex, making objective holding that much more viable. Character cards have keywords, which interact with certain cards for particular effects. It’s a nice touch that adds another angle to strategising, and it’s satisfying to watch them interact to effectively pull off damage-dealing or glory point-winning combos.

Another thing that’s changed is the more active role terrain plays. Most notably, players can set down a lethal hex token each at the start of the game, making the terrain a more prominent hazard to deal with. Similarly, objective tokens can
be flipped to become fanged maws grown from the solid rock, turning prizes into deadly traps for the unwary although disappointingly the box itself contains no cards to do this.

Games Workshop’s more recent releases have shown an increasing understanding of how to teach mechanics to new players and speed up game flow. This is true of Beastgrave; this iteration of Underworlds features small but useful tweaks like the bolding of handy information and a combat sequence flowchart.

The only real gripe with the box is the fact that some elements – the aforementioned cards to turn objectives into lethal hexes and some counters for use with certain special abilities – have been withheld from the box to be sold as accessories or later expansions.