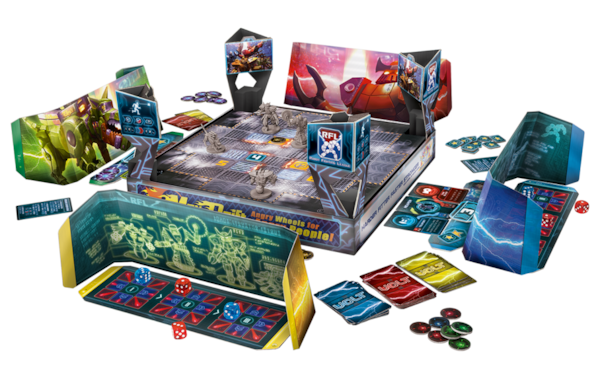 Chaotic robot wars that are a bit hit-and-miss

First released with the subtitle Robot Battle Arena in 2014, Volt is Robot Wars in a board game form. This new edition – now with just the one-word title – has been tuned up inside and out, with a shinier look and updated mechanics.

If you missed Volt's first outing, it is an arena combat game. At the heart of the action sits a programmable movement mechanic; every turn, players assign dice to control panels hidden behind individual screens before proceeding to execute all their selected actions simultaneously.

The control panel is quite ingenious in its simplicity and effectiveness. It allows for a variety of player choices, governed both by strategy and guesswork. The simple rules – movement comes before shooting, lower dice results activate first – give a structure to the game and make your sequence of actions critical to get right.

Players earn victory points by, of course, destroying opponents’ robots, but also by occupying special areas on the board. This means players will spend the majority of the game trying to anticipate each other’s movements and sync their move-shoot actions to catch opponents in just the right spot. This, while not easy, is possible to do because only a few victory point-giving tokens spawn each round, encouraging all the players to head to the same place.

While programmable movement is a very neat idea, what truly lifts the game is the inclusion of modules. Essentially, these are special powers that players can attach to their robots to add a bit of variety to how they move or shoot. For example, one might turn their lasers into a grenade launcher affecting not just one square on the board but an entire area. Another might shunt opponents off their square as your robot moves past them. Modules bring some much-needed chaos into Volt – there is really no point playing without them.

Volt may confidently turn some of its familiar opponents, like Robo Rally, into a pile of cogs and screws, but its electrical machines face stiff competition from a steam-powered predecessor. Although complete opposites in terms of theme and setting, Volt and Wild West train-robbing game Colt Express are actually very similar. In both, players plan their actions to be performed at the same time, causing a general chaos of hits and misses. The glitch in the system is that Colt Express handles its bedlam much better. Every turn in Colt Express, whether things go according to plan or not, something exciting or hilarious happens. Volt, while aiming to be more strategy-heavy, occasionally forgets it also needs to be fun; a mishap in your planning can easily lead to a turn ending anti-climactically with nothing happening. This problem is particularly prevalent in a two-player game, where the players can easily spend several turns dodging each other and not progressing the game.

From its original release, Volt’s artwork and component quality has seen a massive improvement. The dreadful greyness of Robot Battle Arena (the name change is also for the better) has given way to colours and beautifully detailed minis showcasing the robot designs. In its attempt to look better, Volt may have even gone slightly over the top – the practical purpose of the arena pillars is questionable, but they do look impressive when the whole game is set up. It is the box insert that confuses the most. It is nicely detailed and has a variety of compartments of all shapes and sizes, except very few of them seem to actually fit the game components, which end up piled on top, the lid unable to close properly.

Volt is impressive and disappointing at the same time. It is loaded with fascinating ideas and mechanics but locks gears when it comes to their execution. If you’re already a fan, though, this revamped release has done wonders to improve the look and feel of the game.

Very much like its own gameplay, Volt is hit-and-miss. Its gameplay could do with more explosions and less tinkering. However, those who liked the original Robot Battle Arena will find its latest release much improved for the better.