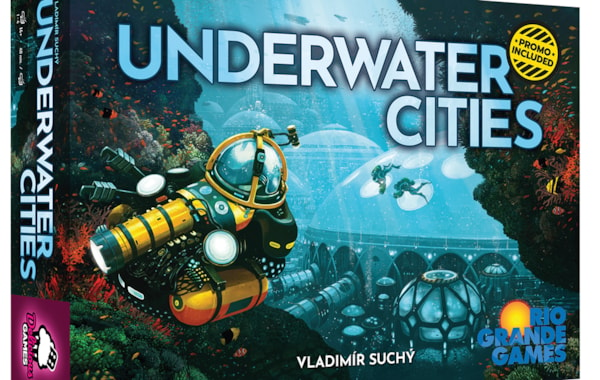 The Earth is overcrowded. Humanity has spread across its surface, rendering its resources scarce and its atmosphere crippled. But enough of today’s news, let's take a look at Vladamir Suchy’s expansive game of deep-sea colonization.

Underwater Cities is city and network building worker placement game, with a healthy dose of engine building thrown in. Admittedly that sounds like a lot, and in truth, Underwater Cities does tilt toward the heavier end of the spectrum. But only just. Beneath its scores of components, imposing player boards, and persistent iconography, lies an unexpectedly accessible game. 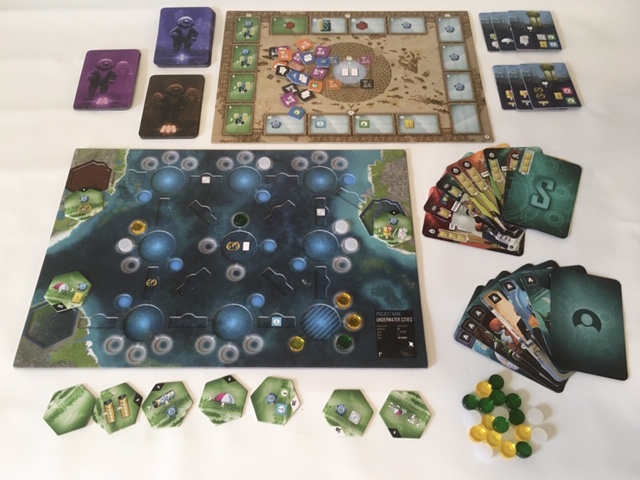 Over the course of ten rounds players compete to build the most profitable underwater nations – apparently future generations have learned nothing of the effects of rampant capitalism. Societies and economies will grow through the construction of domed cities, research and production facilities, and the tunnels that tie them together, culminating in vast networks that may even connect with the overflowing metropolises on land.

Each round revolves around players taking turns playing one of their three workers to the board along with a single card. If the card matches the colour of the space chosen then the card’s action also takes effect. Green cards provide powerful actions but must be played to less powerful green spaces whilst yellow cards offer weaker effects when played to the board’s more useful yellow spaces, with red actions taking up the middle ground. Thanks to this simple but fascinating gameplay loop, each turn manages to establish a comfortable rhythm, with its complexity only dependent on how much players intend to strategize. Things only get slightly fiddly in the game’s three production phases which involve a fair amount of tallying up and cross referencing, but even these moments elicit a joyous feeling of progress as the resources come pouring in.

Despite the game’s length, repeat plays of Underwater Cities amazingly manage to stay fresh, as players pick apart the various ways to develop their aquatic kingdoms. Only a few building types, such as kelp farms, actually generate points throughout the game, but rigidly sticking to these structures can often lead to a lack of resources later. Picking up the occasional Special Card from the central board can give players incentives to pursue other paths, perhaps ones that tie in to one of their end game scoring metropolises, and building varied economies will allow for easier expansion. With each connected city scoring points based on the variety of surrounding structures, rapid expansion is encouraged, but there’s always other routes to victory – you just have to find them. Replay-ability is further enhanced with the option to use asymmetric player boards which gently nudge players in to adopting different strategies by restricting or rewarding various building sites.

Vladimir Suchy has done a fantastic job of mixing up the traditional flow of the worker placement genre, and for this he should be applauded. Due to the variety of cards entering players’ hands each turn, strategies won’t always rely on the usual restrictions of worker placement, inevitably affecting exactly how each player’s ocean floor utopia progresses. This stroke of mechanical genius makes each player board, and indeed, each play through feel subtly unique, and most importantly effortlessly satisfying. If only there was more…

Underwater Cities is a modern tabletop triumph, blending original and easy to teach gameplay with satisfying depth – no pun intended. Games are relatively long but it’s hard not to want to dive into another, and with its varied player boards and end game scoring goals, Underwater Cities’ replay-ability can’t be faulted.

TRY THIS IF YOU LIKED TERRAFORMING MARS...

Their colonisation efforts might be polar opposites, but there are some distinct similarities between these two popular games in regard to theme, production, and card-based action.