The Quacks of Quedlinburg review Does the Kennerspiel des Jahres winner pull it out of the bag?

In The Quacks of Quedlinburg, players sometimes seem more like terrible chefs than the dodgy practitioners of homebrewed medicine its box depicts.

Players brew a concoction by pulling ingredients at random from a personal blind bag of tokens, chucking them into their individual pot. It’s quantity over quality. Your woeful attempt at pumpkin and toadstool soup quickly fills with garden spiders, crow skulls and ghosts’ breath. Not exactly minestrone.

Luckily, it’s not the taste that matters, or you’d all be losers. But, like that chunky potato and leek thrumming in the microwave, what’s important is that your potion doesn’t explode as the result of you drawing too many ‘special ingredients’ from your personal bag of bits, resulting in you missing out on bonuses given to the round’s best brewer and having to choose between scoring points or thinning out the nasties in your bag with more ingredients – instead of automatically claiming both if you keep your pot as cool as your head.

There’s an entertaining but light tension to each draw of a token, as you wonder whether to try and sneak that extra pumpkin into your broth only to have the whole thing blow up in your face. It's combined with an inventive take on racing along a track, with everyone trying to push as far along their own (but identical) spiral of points as they can, with each numbered token jumping them ahead a different number of spaces.

Extra ingredients added over the course of the game and random events from the fortune-teller deck give a nice sense of structure and progression, and the ability to see how far your rival quacks have made it around their potion spiral invites some meta-games of chicken as you try to edge just ahead – or fake them out to have their mixture go kaboom. The final round smartly embraces the passive interaction and competition between players with an enforced spin on blind bidding, which can be applied to the entire game – but it’s more dramatic to save the proper head-to-head duels for the last few pulls. Being relatively one-note and so luck-driven, it overstays its welcome just a little at around 45 minutes, but all players brew their own potions at the same time so there’s at least little downtime or excessive scaling with more people.

Each ingredient has a different strength and cost, inviting the decision between filling your bag with fewer, stronger tokens or extra weaker chips that have the benefit of diluting the bad pulls. This is where the strategy, if there is any, lies – beyond that, you’re largely throwing chance (and whatever disgusting mixture you’ve made) to the wind. Even with built-in ways of upping your chances a little bit, your standing at the end will unsurprisingly come down to what you draw, when. This can be frustrating: once your flask allowing you to return a single bad ingredient to your bag once is spent (it can be recharged at a cost), there’s little stopping you immediately blowing up your pot turn after turn. The opportunity to bump up a potion’s substance using rat tails works as a nicely thematic catch-up mechanism for those behind the leader, but it’s still easy for a couple of lucky or unlucky rounds to result in a runaway position.

For those willing to take the bad draws with the good, The Quacks of Quedlinburg has plenty going for it. The bag-building is satisfying and encourages fun moments between players in a potion-making standoff. The central pull-and-reveal hook is balanced well with bonus effects and events that give you things to do – even when the outcome feels out of your hands.

If you can find the fun in chucking random things together and seeing what happens with little control over the often explosive result, Quacks’ mixture can be a heady brew. Otherwise, it might just drive you stir-crazy.

Not one for the unlucky, Quacks’ bag-building blend is an entertaining spectacle that often seems on the edge of losing control completely, but keeps from boiling over into chaos. It'll cook up a storm if you’re willing to go with the flow. 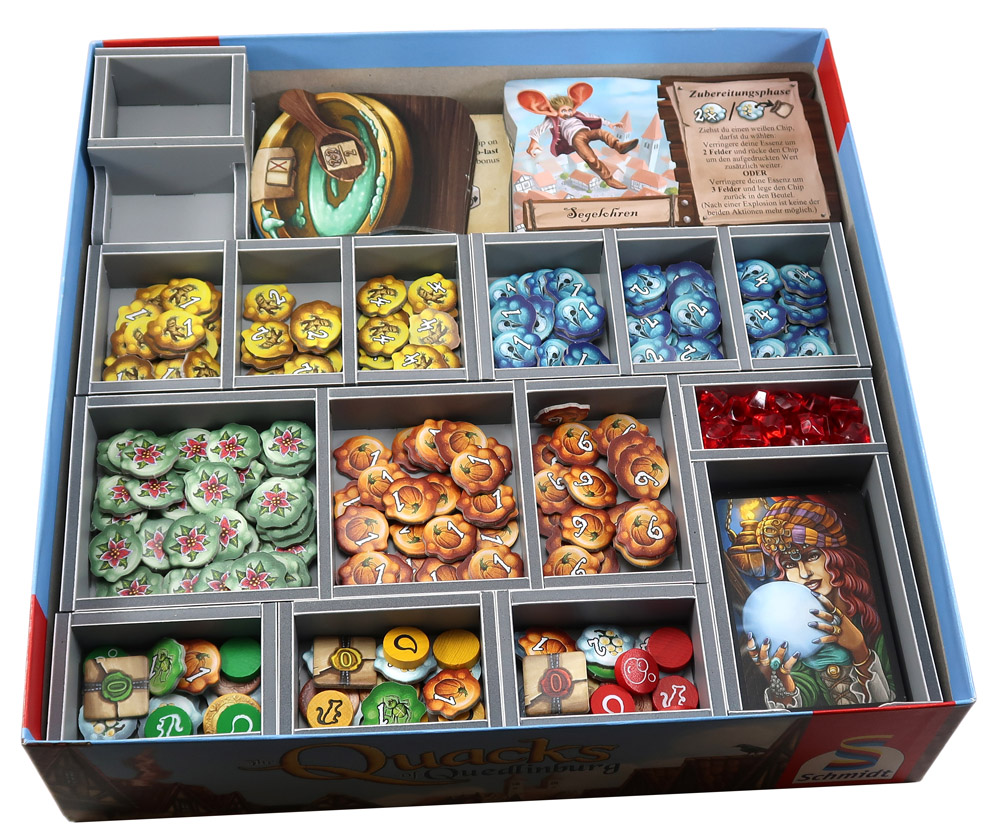 Compatible with Quacks of Quedlinburg®, and The Herb Witches® expansion. Insert trays also have space for plastic ingredient tokens.