The Elder Scrolls: Call to Arms was the winner of the Tabletop Gaming 2021 Award for the "Best Miniatures Game". You can watch the awards, and hear from the creators themselves below!

For adventurers that have taken an arrow to the knee, there’s few better ways to relive your glory days than on the tabletop. Modiphius has had a crack at recreating the feeling of The Elder Scrolls, and Skyrim in particular, for this outing.

The Elder Scrolls: Call to Arms is a skirmish level wargame that comes in two flavours, either solo (a blessing in these times) utilising the rules for ‘Delve Mode’, or you can go head to head with other players in ‘Battle Mode’. Both play styles can quickly be picked up from the scenarios listed within the quest book, although there is plenty of scope to easily create your own. The difference between the two modes largely being whether you are playing against game controlled adversaries, or against another player with adversaries still appearing to get in the way.

As you would expect with a wargame inspired by Skyrim, it is being released with a number of miniatures depicting heroes, soldiers, and adversaries that you will recognise. The miniatures themselves are in 32mm scale available in both hard plastic and, if you prefer your minis a little more detailed, resin. They are nice sculpts with a good level of detail. Building them was somewhat challenging as some of the miniatures had as many as 12 pieces, but this allows for more dynamic poses so is worth it in our opinion. The current range of miniatures include a starter faction box set for the Imperial Legion and Stormcloaks as well as a Delve Set offering a Dragonborn miniature and Skeletons and Draugr. Whilst this does mean that options are limited, it certainly looks like Modiphius have grand plans to release more warbands in the future. There’s also a strong case to be made for bringing your own Skyrim flavoured gangs to the game.

The basic gameplay is straightforward, with each player controlled miniature getting two actions from those available, including attack, block, and even pickpocketing. A number of these actions will require a test. This is done using the white skill dice on which you need to get a result equal to or lower than the target number, based on the model’s attributes. For example, swinging a melee weapon at a Draugr’s head will require you to roll against the model’s strength. Taking aim with a bow? Then you will need to roll against your agility attribute. Between these and the other attributes of endurance, intelligence and wisdom, you can carry out a variety of other things such as magic attacks, or non-offense skill tests like lockpicking or speech. Depending on the model you are using, and the action you are carrying out, you may also get to roll a number of the coloured D6s. There are three green accuracy dice that offer negative modifiers to the skill dice and nine effect dice, three each of yellow, red and black each colour being more effective respectively. These dice are used to determine the effects of actions such as the damage caused in a melee attack.

Within the core box there is a quests booklet containing 12 scenarios, six for ‘Battle Mode’ and six for ‘Delve Mode’. These provide players with ways to set up a game as well as different objectives to complete. The 'Delve Mode' scenarios allow for you to create a party to venture out and fight against adversary forces whilst completing whatever objectives the scenarios sets. Each scenario provides a slightly different aim to your games in addition to the oaths specific to each scenario and the quest cards. These oaths allow players to get additional victory points based on how they complete the scenario, such as searching all of the treasure tokens, or completing a specific action whilst hidden. At the beginning of a game you will draw a Quest Card from the deck relevant to the mode you are playing. Each of these adds a further objective to your games and kept across games until completed, with some starting a chain of multiple quests. It is not only the adversaries that will stand in the way of your objectives though – there is also an event deck for both game modes that captures the unpredictable nature of adventuring in Tamriel. These event cards are drawn at the end of each turn, outlining an unforeseen event that will either help or hinder your party.

Initially, we did wonder whether six solo scenarios would offer enough replayability, but between these scenarios, the different quest cards and the event deck there is plenty to keep adventurers on their toes. Throw in official expansions, homebrew and community expansions, and there will be more than enough to keep campaigns rolling. 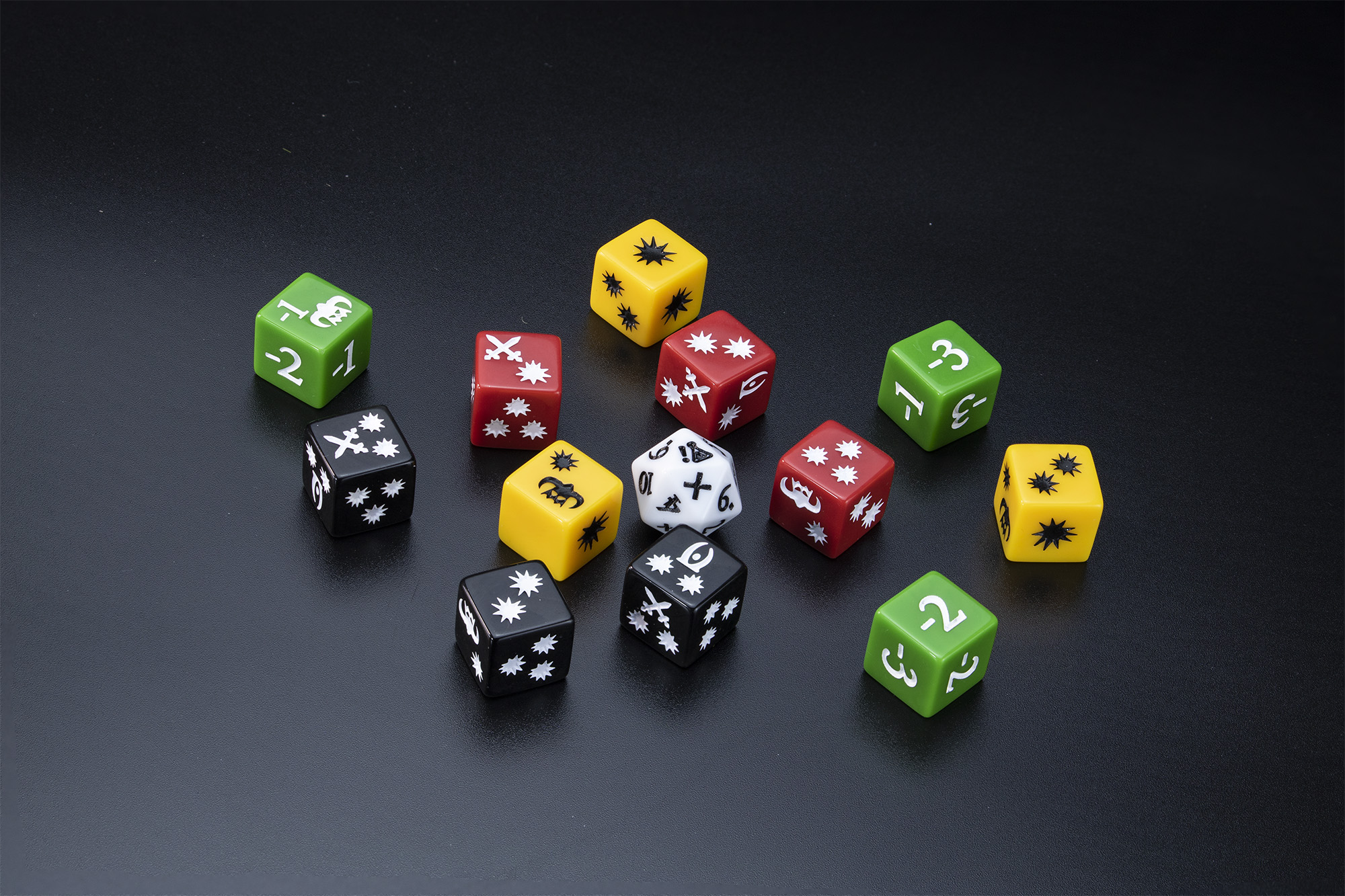 When playing games in both modes the game relies heavily on its enemy controlled units. This is done using a specific card for each adversary faction. This card gives you a table to roll on to determine what action that specific adversary will take, based on the result rolled and the ‘path’ that they follow. All of this is designed to give the adversaries an unpredictable nature, whilst also allowing for different types of bady guys to act as you would expect them – such as being more cautious or aggressive. Whilst this is not a complicated system to control the adversaries, it does feel a bit clunky and perhaps slows the game down leading to quite a lot of checking early on.

For those looking for the legitimate Skyrim feel, fear not. You can, of course, make use of Dragon Shouts if you take the Dragonborn in your party, so you will be able to ‘Fus Ro Dah’ adversaries across the board to your hearts content.

One area where we this does stray away from the Elder Scrolls series is there’s not really any stat development within the game. You can level up one of your heroes mid game by using some of the victory points you have earned; however, each hero can only level up once receiving an increase to some stat reserves, attributes and gain new abilities. Having said that, there is a lot of freedom with the upgrades that you can take on your heroes and it’s easy to tie games together (with some options for this already included) allowing you to improve your equipment through collecting treasure during your games. We weres still surprised that there wasn’t more opportunity to develop your party more than this but looking at some of the updates from Modiphius regarding the future of this game, this is definitely something that is on the horizon, but it certainly isn’t a part of this game yet. There is still plenty on offer for both modes and a lot of potential to create your own campaigns within the world of Tamriel.

The Elder Scrolls: Call to Arms is a fun skirmish wargame that any fan of the Elder Scrolls series would enjoy. Some of the aspects such as the system to control adversaries does feel a bit clunky, but this is something that would probably improve with time. The dice system is straightforward making use of the custom dice included to easily handle models with different ability levels, as well as better weapons and armour. We can’t help but also feel like this is only the beginning for this game and with the planned release schedule and the addition of more character development rules it will develop into a far deeper experience. 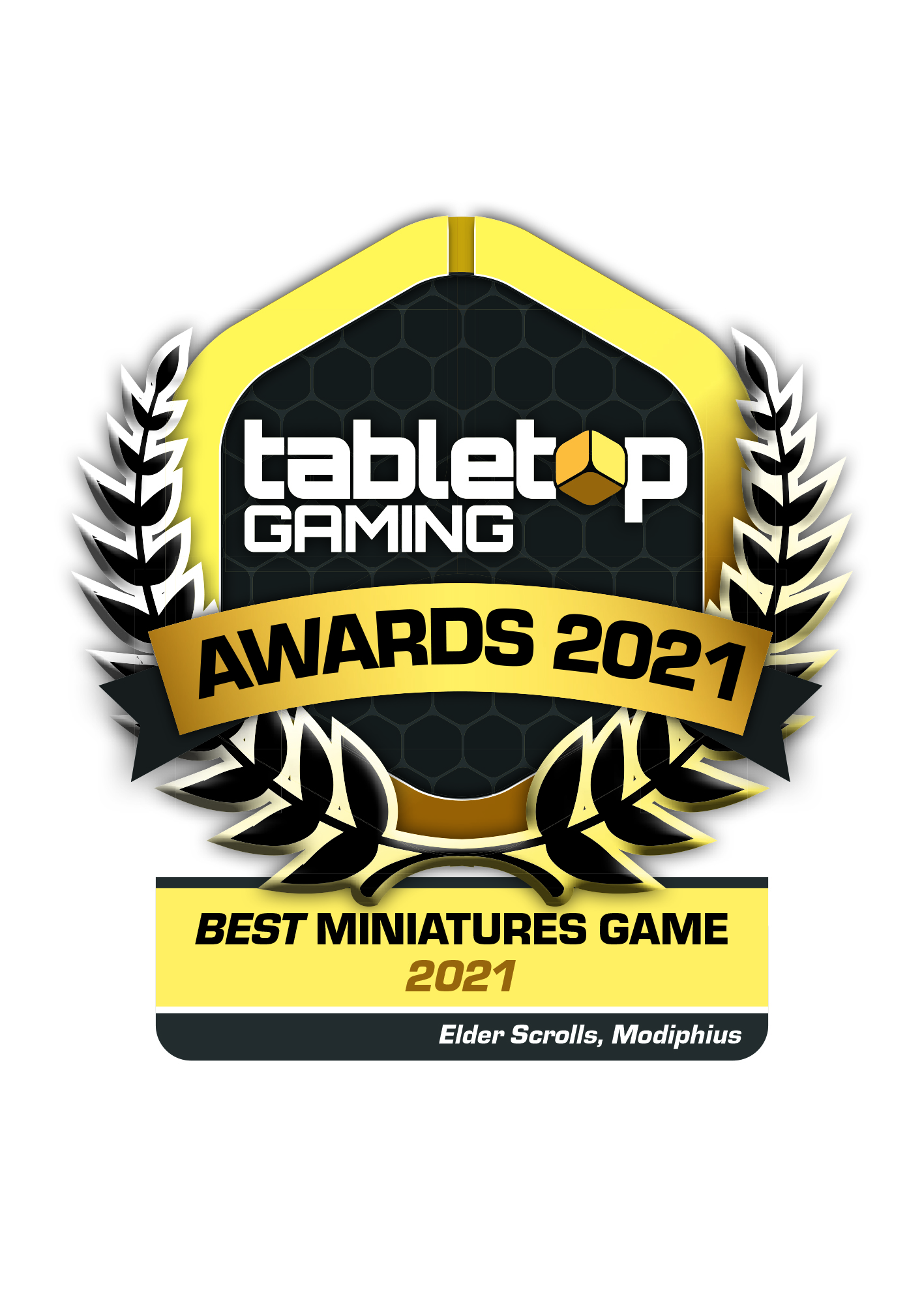 Geared towards fans of the Elder Scrolls, it is fun and offers players the option of playing solo or against others, but is perhaps a little bit clunky in places.

Play this if you liked: Frostgrave

Skirmish wargames like Frostgrave have previously been as close as you can get to Skyrim. Now of course, we have this.