The Aquicorn Cove Board Game Review 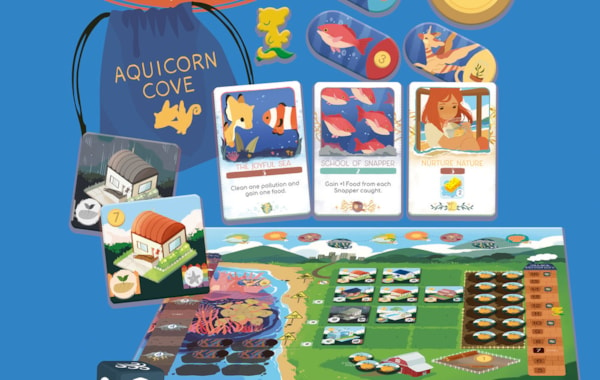 Part of your world

Katie O’Neill’s insatiably charming graphic novels first transitioned to the tabletop world as the family-friendly deck-builder, The Tea Dragon Society Card Game. The second venture inspired by her works, The Aquicorn Cove Board Game focuses on the same audience and keeps Katie’s signature the too-adorable-to-handle art style, but digs much deeper, both in gameplay and its theme.

In this co-operative board game, players take the role of one of the characters from the graphic novel as they build a small fishing village next to a cove of Aquicorns, benevolent reef guardians. The game is split into phases, during which players fish, plant crops, feed the village, build and generate income. Each round can be aided by the Aquicorns or hindered by the weather conditions, especially during the winter season!

There is no victory-point-pat on the back from feeding the whole village or bonuses for the most buildings constructed because this isn’t what The Aquicorn Cove Board Game is about. In fact, there is no ‘winning the game ’in the traditional sense. The main focus of the game is on the delicate balance between the growing industry of the village and the natural world around it.

This gently presented cycle teaches in a simple, yet incredibly effective and entertaining way, that nature’s resources should not be taken for granted – we rely on its resources to survive and prosper, but we can’t keep taking and never giving back as it will only lead to our own demise. Players succeed in The Aquicorn Cove Board Game by understanding their impact on the environment and maintaining the balance, resulting in prosperity for the village and in nature.