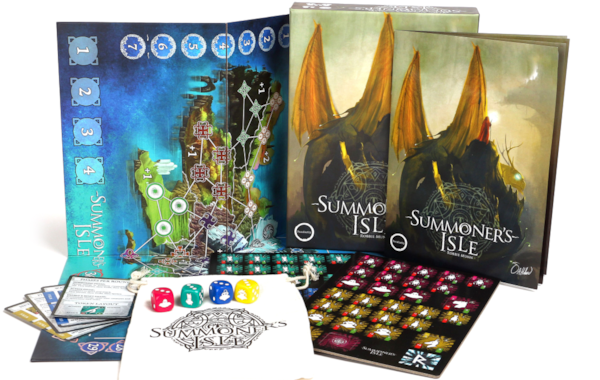 Wyrms and trolls and sprites, oh my!

Modesty is too unappreciated a virtue in board games these days. With Kickstarter encouraging a ‘bigger boxes, better components, more miniatures’ approach to game design (with, admittedly, some spectacular results), it’s easy to overlook the value of a travel-friendly, small-box game that won’t knacker your back lugging it to your next game night. And just because a game is light, that doesn’t have to mean it’s lightweight.

Summoner’s Isle, the debut title from independent designer Robbie Munn, is one such game. It comes with a compact, double-sized board, a selection of dinky cardboard tokens and a single custom die for each player. Its rulebook is only a few pages long, and most participants will absorb how to play before the first round is half over. Yet once you get stuck in, you’ll find your mind racing with all the tactical possibilities each game presents.

Like Root it is an area-control affair with a relatively limited number of areas to control. Like Risk it gives you only three kinds of ‘troop’ to deploy. Each player is a summoner, contesting for supremacy of a single island to prove their creature-conjuring worth. The first to earn 36 energy triumphs outright, although if the game reaches six or seven rounds before that happens then the player with the highest energy at the end of the final round is the winner in a lesser sense.

The tricky thing is you need to spend that energy to put your creatures on the island, placing them on any available space when you do so – even in the middle of territory already dominated by another player. Also, the further along the energy track you are, the greater energy penalty you have to pay at the end of each round; while anyone lagging behind will conversely receive a bonus to their energy – a neat mitigation mechanic which prevents runaway-leader syndrome. So summoning energy needs to be carefully managed throughout.

The core of the game involves placing and battling with those creatures. There are the little sprites, which are weak but low-cost, and receive a defence bonus if supported by their spritey pals, who also grant a significant energy bonus at each round’s close. There are trolls, tough and versatile, able to pull off three actions each during their activation phase. And for each faction there is a single wyrm: big, strong and allowed to switch places with adjacent allies at an energy cost, to slither through to the frontlines at the start of each turn.

With small territories and few placement spots, it doesn’t take long for any game, even two-player, to become hotly contested – and swiftly contested, too, as combat is slickly resolved with a single die roll. Each game plays quickly, meaning its engaging intensity is maintained throughout, and there are no attention dips, with each round’s phases arranged so there’s barely any downtime. There is a player turn order (always favouring whoever’s lowest on energy), but the phases are arranged by creature rather than by player: so everyone’s wyrms go first, then everyone’s trolls, then everyone’s sprites.

It may not be to everyone’s tastes – especially those of us who love plonking finely-wrought minis on expansive boards – and the board design might be a bit too busy for some. But there’s an undeniable appeal to the compact (and reasonably-priced) elegance of Summoner’s Isle. It is a modest success, in all the best ways.