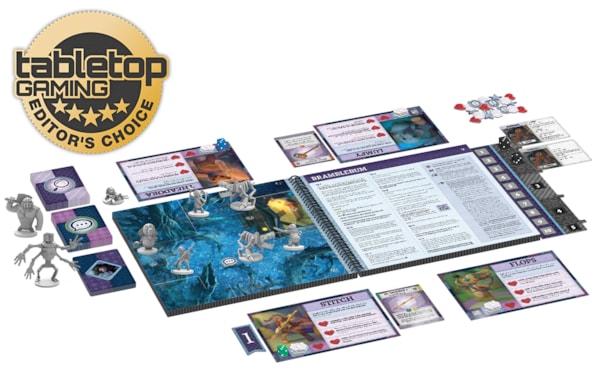 After just one play of Stuffed Fables, you’ll understand exactly how much an inspiration Pixar’s Inside Out was on designer Jerry Hawthorne. A movie in which a girl’s personified emotions struggling to guide their young charge, it echoes strongly in Hawthorne’s gamified, seven-chapter bedtime story about a squad of soft toys journeying through a junk-strewn dreamscape to protect their toddler owner from nightmares.

But, as Theodora (think of a Care Bear who stabs things), Flops (a lapine Legolas), Lumpy (shy elephant with a huge mallet) and Stitch (wise old ragdoll thing) contend with a lost security blanket, or bed-wet-inducing running taps, or a stolen milk-tooth, you’ll sense other influential connections. Neil Gaiman’s comic-book series The Sandman (specifically the story A Game of You) also took dream-animated soft toys and placed them in a perilous situation. Then, interestingly, there’s Christopher Nolan’s Inception, in the way that a real-world stimulus (say, a flooding bathroom) will manifest in the subconscious environment (like a raging river).

It all makes for engaging, imaginative and entertaining storytelling – with the caveat that the writing style can be cloying (it pitches young) with some grammatical lurches between past and present tenses and second- and third-person. It makes for a fabulous game experience, too, not least via an ingenious innovation by which the thick, ring-bound storybook is the board, enabling you to move the appealingly rendered minis around the vivid illustrations as your characters are drawn through Hawthorne’s branching narratives.

With each of the seven stories forming a larger arc, and coming with their own ‘discovery’ deck that adds equipment and foe cards to the main decks, there’s a gentle legacy feel to Stuffed Fables – though it is intended to be easily resettable and replayable. But this is far more than a dungeon crawl. As with Hawthorne’s Mice & Mystics, the story ensures variety with each page-turn, so you won’t just be moving and skirmishing, but attempting such other adventuresome tasks as racing for a train or dodging bowling balls in a vast canyon.

Whatever you face, co-operation is paramount and the game is best enjoyed with all four characters whatever the player count. While the rules are simple, with no stats and only a few abilities per character, combat can be tough, so players need to be generous with their assets – be they health (represented by wads of stuffing), items (easily shareable) or action-determining dice.

Ah yes, the dice. There are a lot of them. Hawthorne loves his little plastic cubes of randomness, so there is a fair chance that, no matter how conservatively or considerately you play, your story will come to an abrupt, frustrating halt thanks to a few low rolls.

However, such frustration is thankfully mitigated by the sheer elegance of Hawthorne’s colour-coded dice system, whereby five are drawn blind from a bag at the start of each player’s turn, with each colour determining specific actions. It’s gameplay touches like this, as much as Hawthorne’s storytelling thrust, which will keep you – and any little ones you may find snooping around your games cupboard – coming back for more.