Pathfinder takes to the stars, but is its sci-fi sequel interstellar or lost in space?

Starfinder is an evolution of Pathfinder in just about every sense of the word.

Not only does the sci-fi-soaked follow-up to 2009’s influential Dungeons & Dragons descendant take place thousands of years later in the same universe – albeit completely transformed by the advent of futuristic technology and unexplained disappearance of Pathfinder’s home planet of Golarion centuries before – it also makes significant changes to Pathfinder’s roleplaying and combat systems (which were an advancement on D&D 3.5 to begin with) that result in a game that feels familiar and aware of its legacy, yet distinctly unique and singular.

There’s no need to know the wider lore of Pathfinder to appreciate Starfinder’s interstellar setting – in fact, the designers themselves seem to be making an effort to distance themselves from becoming bogged down in questions of specific links to Pathfinder by introducing a mysterious period in time called the ‘Gap’, which resulted in a galaxy-wide amnesia that means ‘only’ around three hundred years’ of history is known. It’s the storytelling equivalent of skipping a chapter while reading a book and could be seen as an overly-convenient way of jumping ahead in time without having to establish how the fantasy world transformed into a galaxy full of lasers and androids – at the same time, it’s a way of neatly separating the games instead of feeling beholden to its predecessor’s dense lore. For me, it worked. 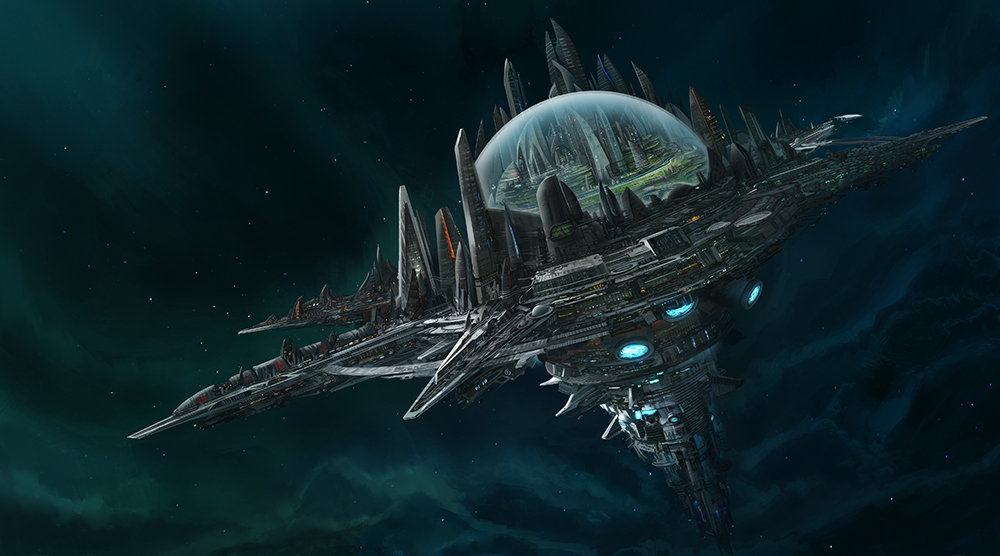 If you are a fan of Pathfinder, there’s still plenty to chew on that’s been carried across, from the reappearance of deities to the evolved forms of existing creatures. If you can’t find something, there’s a very good chance you can just bring it across yourself: the core rulebook includes a sizeable chapter detailing how to convert existing Pathfinder characters and monsters over to the new game with minimal fuss, as well as explaining how to use the traditional fantasy races in the sci-fi setting and running through what’s happened to them in the time since Pathfinder.

Replacing the classic races (except humans, who remain a fixture) are six new defaults, leaping from sci-fi staples of androids, four-armed nomads called kasathas and the psychic aliens known as lashunta to anthropomorphised lizards, insects and rats. It’s a fun mix for you to craft your guardians of the galaxy from, with each race well established within the in-game universe and presenting plenty of interesting options for player characters. There does remain a feeling that the spaceship could’ve been pushed a little further out with some slightly more weird and wonderful options – this is something that will likely be resolved by future player guides – but this is a strong starting point.

The races are expanded by seven classes, which do a good job of evolving things beyond the classic RPG clichés yet remain recognisable enough to be easily understood – among the more interesting picks are the Jedi-esque solarians, who can summon weapons and armour out of energy; mechanics and their versatile drone companions; and technomancers, who operate using a blend of technology and magic, compared to the more traditional spell-wielding mystic. Of course, there’s nothing stopping a non-magic character from installing a body augmentation that allows them to breathe fire, either – one of the highlights of character progression is discovering the quirky tech-infused talents available for the right price.

Completing each character is a theme, providing a general focus – from ace pilot or bounty hunter to the galaxy-wide celebrity of an icon. The themes are general personality traits but, more importantly, lend extra depth and narrative thrust to characters, as well as bonus abilities, helping them to feel more fully-rounded from the moment they blast off into the universe. 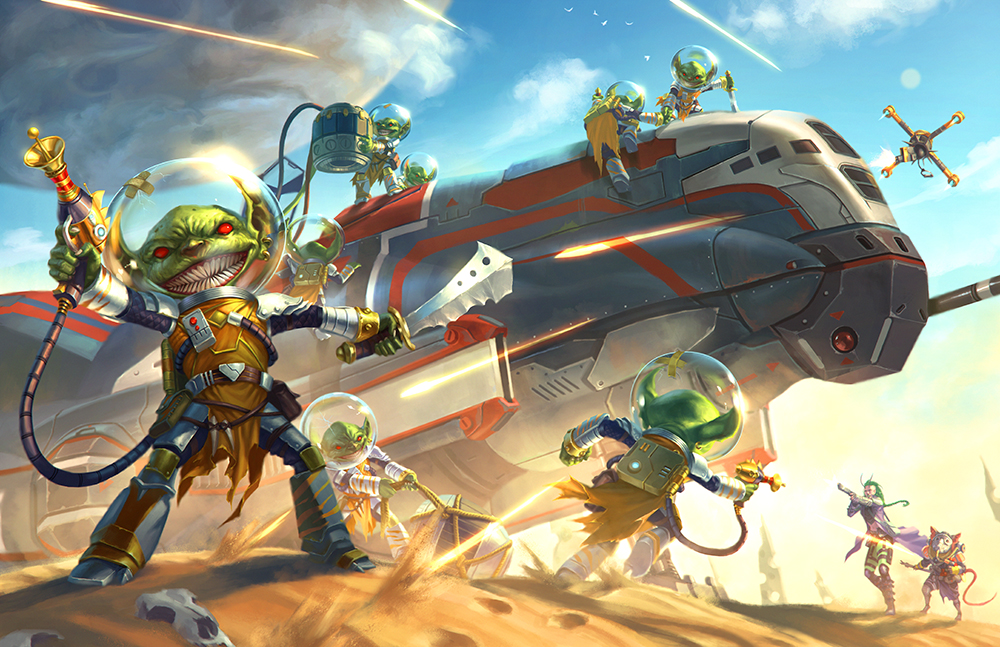 There is a chapter dedicated to bringing existing Pathfinder monsters – such as goblins – to Starfinder. (Artist: Setiawan Lie)

Although magic is present, it takes a backseat to Starfinder’s more tech-focused abilities. When magic is used, it’s been massively simplified from the preparation and components required to cast in Pathfinder – now, casters need only concentrate for a set amount of time to fire off an enchantment, although they can be interrupted and fail the spell if attacked. Similarly, while each class gets its own list of spells, gone is the division between arcane, divine, psychic and so on. It makes for a more straightforward system that aligns with the less prominent role sorcery plays in Starfinder's setting, and also allows it to feel like a more natural fit with the futuristic weaponry and skills of characters, instead of feeling like a hang-on from its fantasy forebear.

A similar philosophy of simplification has been applied to the combat. Natural 20 rolls on a d20 now score instant critical hits for extra damage and effects – no secondary confirmation check required – and players can perform two simultaneous attacks off the bat (with a hit penalty to both) instead of needing to scale up their attack strength as in Pathfinder. Flat-footed has been relegated to a condition and fixed roll penalty rather than a dedicated armour class, while attacks of opportunity now only affect three specific actions (moving, ranged attacks and casting) to stop enemies striking out every time a player does so much as scratch their nose. The small changes chime perfectly with Starfinder’s increased focus on ranged combat – although laser swords and other melee weapons are just as viable and effective – and add up to give combat more of the cinematic speed and thematic feel of a Star Wars lightsaber duel or Star Trek phaser shootout.

Adding to this is the decision to divide health into HP and stamina, with the latter serving as a form of rechargeable shield that is lost before characters are damaged directly. Stamina can be recovered by resting briefly and spending resolve points, a successor to the hero points handed out by Pathfinder GMs that allowed players to pull off special abilities. RP can similarly be used to re-roll certain checks or recover when dying (as well as counting as extra HP when mortally wounded) but, unlike the single-use hero points, are calculated based on each character’s makeup and can be recovered with a long rest. The expanded recovery options mean that casters aren’t quite as integral to a party as before, while RP presents more ways to help turn fights in the players’ favour – plus offer a way to counteract frustrating dice rolls, albeit at a cost. 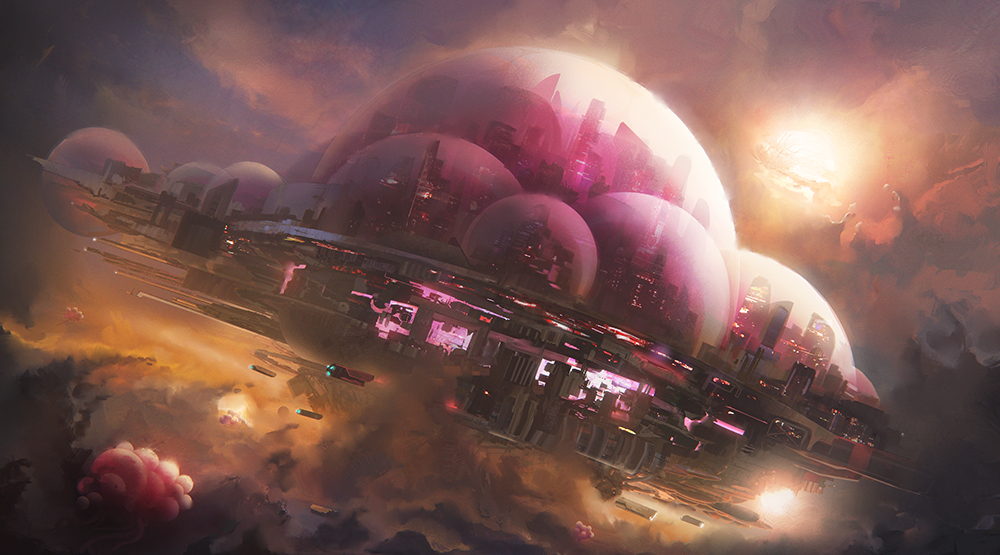 The universe is full of different planets and stations to explore, such as Liavara (Artist: Leon Tukker)

The single biggest addition to Starfinder is space combat, which comes complete with its own set of rules and character-specific abilities. It’s by no means mandatory, and slightly awkwardly requires a separate hex map in addition to the standard square grid used for ground missions, but fully delivers the atmosphere of a living, breathing universe.

Ships are created and upgraded by GMs and players much like characters, with speed, maneuverability and armaments dictating the way they fly around and fire at any attacking vessels. Players’ characters take on the various roles onboard – from captain and pilot to gunners and engineers – and can lend their skill to each round of combat, boosting systems and their crewmates before moving, pulling off X-Wing-style stunts and attacking. There are a number of different talents for each role (characters can swap positions mid-battle), yet they are largely specified by the role rather than the character – you wouldn’t necessarily want to have a space combat-only campaign or scenario, as it does feel more limited than fighting on the planet surface, bwhen it comes to presenting a different style of combat and storytelling.

Starfinder isn’t quite the quantum leap away from Pathfinder some might expect or desire – if anything, it feels more like Pathfinder 2.0. If you didn’t enjoy the crunchier aspects of the fantasy game’s roleplaying recipe, the mechanics here are significantly streamlined but stay true to supporting a complex and potentially overwhelming amount of options for more casual players. In tightening Pathfinder’s gameplay, though, Starfinder improves in almost every way on the older game, while managing to successfully bring to life a universe with established history that also feels fresh and ready to be explored anew. I can’t wait to head back in.

Starfinder does a fantastic job of translating Pathfinder’s gameplay to a sci-fi setting, refining the classic d20 RPG mechanics while introducing smart additions that fit with the game’s greater scope. It won’t change your mind if you’re not already a fan but, if you are, it’s a joyous next step.