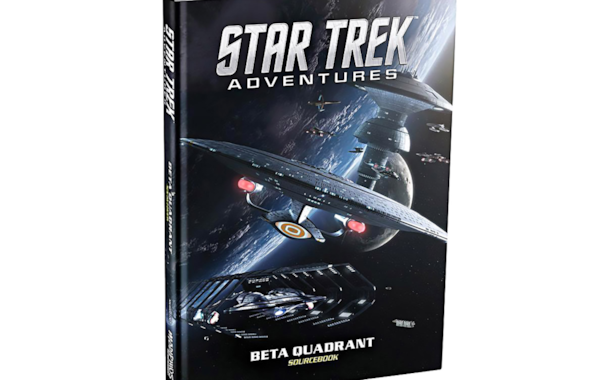 Boldly go, but only if you really want to

You would think it’d be impossible to sum up a full quarter of the galaxy in a single book, but the Beta Quadrant Sourcebook makes an impressive attempt at doing so. However, while it’s a wonderfully well put-together piece of work, it probably shouldn’t be at the top of your shopping list.

At its heart, the book is a guide to playing in Star Trek’s Beta Quadrant, home to iconic races including the warlike Klingons, stoic Vulcans and devious Romulans. More than half of its pages are devoted to background information about the various worlds and cultures living in the vast region of space, interspersed with samples of in-universe messages, reports and notes.

Every page is stuffed full of interesting information – apparently Klingons are big fans of ice hockey and Moby Dick – that’s been pieced together with obvious love and respect for the source material. Even if you weren’t planning to run the game at all, the book makes for an enjoyable read that could even surprise a few hardcore Star Trek fans.

However, this dedication to the background lore does place the Beta Quadrant Sourcebook in a rather strange position when it comes to a target audience. If the idea of reading up on Klingon wedding ceremonies really appeals to you then you probably know most of the lore already. Even if you aren’t a diehard fan of the show and are truly on the hunt for lore, you could probably get everything you need by spending a couple hours browsing Star Trek wiki pages. The information wouldn’t be as well presented or written, and you’ll miss out on a handful of original creations unique to the RPG, but you would have saved yourself a handful of cash.

With that in mind, there’s a lot riding on the second section of the book – the new rules and options.

Again, while these are all nice additions to the game, there is very little that most GMs would view as vital to running a campaign. There are profiles for a few of the rarer ships and enemies that could crop up, but most of the truly iconic foes already appear in the core rulebook and leave the section feeling a little sparse.

The list of new species for players to take on their trip through the stars is impressively long, but they aren’t exactly the iconic faces you think of when you picture Star Trek. Other than the Klingons, the most well-known species on offer is probably the Bolians or Benzites, and if you can picture what they look like without having to pull out your phone then you’re probably far beyond the point where you need a sourcebook to fill you in on the galaxy.

The very final part of the book is devoted to sketching out campaign seeds in the Shackleton Expanse and, while this is handy, it’s far from a comprehensive setting guide.

Now, none of these issues take away from the fact that the Beta Quadrant Sourcebook is a solid supplement. If you’ve already committed to picking up the full range of Star Trek Adventures books or simply want a nicely presented tome of lore, it will stand you in good stead. But if you’re working on a budget, it’s hard to recommend it over other supplements and releases for the game.

If you can spare the cash this is a great book filled with fascinating Trek lore. But if you can’t, you probably won’t miss it.