Harness the power of nature in this rewarding co-op challenge

You’ve been the villains all along. That’s the philosophy of Spirit Island, flying in the face of countless strategy games that see players crusading through unknown lands, subjugating natives in pursuit of total geographical and cultural domination – all in the name of glory. Here, that perspective is flipped: the invaders attempting to capture regions and develop their civilisation from scattered explorers to bustling towns and cities are your foes.

The invaders spread across the island like a plague in Pandemic, slaughtering the indigenous Dahan people and eventually blighting the land. The only hope is the players’ pantheon of natural spirits, titled with fittingly grandiose names – Ocean’s Hungry Grasp, Shadows Flicker Like Flames and River Surges In Sunlight are among the defenders – and wielding decks of power cards that evoke the distinctive personalities and fortes of the deities as they help the Dahan to flee while scaring off or even outright destroying the explorers and their colonies. Building up energy and letting loose with powers feels as impressive and formidable as you’d hope controlling god-like deities would be, helped along by ostentatious titles such as ‘Sap the Strength of Multitudes’ – a little over-the-top, sure, but isn’t that exactly what you’d want?

Despite the spirits’ imposing solo powers, the ubiquity of the invaders means that working with your fellow immortals is not only vital for victory but also a lot of fun, as the timing-specific execution of fast and slow powers and simultaneous player turns throws open the chance to pull off combos as one god pushes invaders into the searing flame pillar of another, or defends a Dahan village while their fellow spirit wipes out the menacing invaders.

As the spirits’ powers grow, neatly reflected by the slow expansion of players’ decks, so too does the fear they instill in the attacking forces. Once enough fear has been earned, the spirits unleash frightening abilities that drive back the unending tide of settlers, helping to combat the aggressors’ own growing efforts to claim the island. As more and more fear cards are gained, the spirits’ victory conditions eventually become easier, instilling the roughly two-hour game with a sense of deep thematic progression while helping to balance the often punishing difficulty level.

That’s important, because the invaders have their own sense of advancement. Between spirits deploying fast and slow powers, as well as innate abilities that harness their specific natural forces, the explorers work their way deeper into the island. There’s a compelling rhythm to the invader phase as they explore, build towns and cities, and finally devastate certain regions in succession. This predictability gives Spirit Island its gripping sense of desperation, as the spirits work together to frantically deplete their foes in specific areas before they have a chance to bed in and strengthen their presence, eventually causing the blight that weakens the spirits.

How players tackle the threat varies not only based on their choice of spirit and powers, but on the very geography itself. One of Spirit Island’s most astonishing features is its modular board, comprised of four jagged sections that fit together to form the land. Only as many sections as players are used, resulting in dramatically different landscapes and play styles. Although the standard board is perfectly crafted for a tough but fair experience (and is slightly easier to parse visually), the reverse of each section displays a thematic variant that together form the ‘canonical’ Spirit Island, favouring narrative and atmosphere over an even-handed challenge. (There’s a significant lore section in the manual that cements the background world.) It won’t be for everyone, yet the option to forgo fully balanced gameplay for a more atmospheric experience in this way is something from which more games should take inspiration.

In a similar vein are the optional adversaries and scenarios, which grant ‘real’ identities and nationalities to the invading forces, introducing extra gameplay concepts and the need for tighter strategy based on alternate-history reimaginings of England, Sweden and Brandenburg-Prussia. Each also has an escalating difficulty level, which can be combined (with the help of a handy table in the book) to present ten different challenges for each of the adversaries – which is to say nothing of the variability of the differently-talented spirits.

Spirit Island has it all: a deep and meaningful theme, complex and interesting gameplay, and a look that ties everything up in a truly magnificent package. Be ready to devote yourself.

Every aspect of Spirit Island exudes depth, whether it’s the subversion of traditional strategy game tropes or the excellent co-op combination of deckbuilding and area control. The lore and theme are genuinely interesting, with the superb visuals and lavish naming of spirits and powers delivering the mighty feel of power you’d wish for. 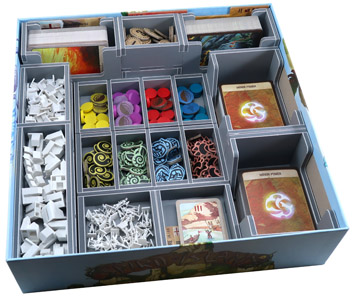 Compatible with Spirit Island® and the Branch and Claw® expansion or Jagged Earth® expansion.