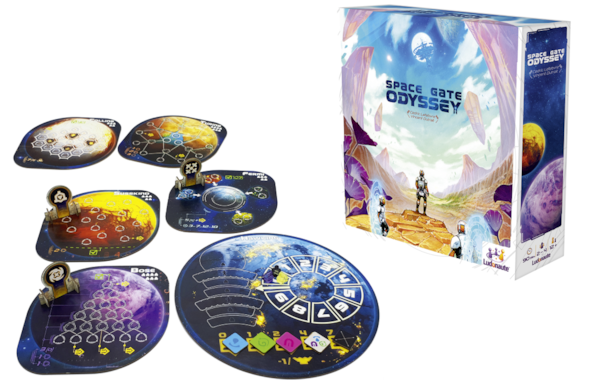 There’s something out there, but finding it could take a while

This sci-fi space exploration game sees players become the leaders of pioneering missions vying to reach a cluster of distant planets using interstellar gateways. While plenty of other games have taken on similar themes, Space Gate Odyssey throws a set of simultaneous problems in your path and challenges you to solve them more quickly and efficiently than your rivals.

At the heart of the game is a cardboard space station – the titular Odyssey – where you’ll move plastic engineer meeples between different rooms to take different types of actions: adding new compartments to your personal colony ship, filling it with crew members or dispatching settlers to claim territory on different worlds. What makes things tricky is that whenever you activate a room, you’ll let any opponents with meeples present take the same action, meaning you’ll have to balance your desire to make particular moves against the opportunities you hand to your adversaries.

You’ll also be able to deploy extra workers to the station, promote your meeples to become chief engineers or install helper robots – and managing your presence on the Odyssey can be deceptively tricky.

Then there’s the process of building your own spaceship. To send colonists to planets, you’ll need a selection of airlocks, science facilities and teleportation chambers; your vessel’s layout is critical to your ability to settle on worlds. You’ll aim to create a coherent set of rooms and corridors, letting your crew go about their duties as efficiently as possible and avoiding leaving any open gaps that cost you points at the end of the game.

Finally, there are the planets themselves. You’ll place a selection in the centre of the table before you play – a random set for each game – and each comes with its own challenges and requirements for would-be settlers. There’s a volcanic world, where players attempt to cluster around magma vents as valuable sources of energy. There’s a planet with permanent day and night sides, where you’ll have to establish your colonies in the light areas before venturing into the higher-scoring dark. There are worlds with long-abandoned canals, aggressive native species or clusters of resource-rich moons.

Working out which planets you want to compete for is half the game’s strategy, and it demands some nuanced, careful decisions. But, in some respects, the whole experience falls flat.

For one thing, there’s a jarring lack of diversity in its presentation. Its artwork shows an all-white crew of astronauts, and its planets are named after an all-male lineup of scientists, engineers and philosophers.

While the random assortment of worlds for each playthrough injects some variety, it also means you’ll need to explain exactly how each planet works every time you play. By itself it’s not a huge problem, but it lengthens a game that already feels a little too long. It takes a few sluggish rounds before you start to feel that you’re making fun, meaningful choices, and you could easily cut the first half hour without losing anything of value.

With the recently released Skylands employing some similar ideas, but cutting straight to the good stuff, it’s tough to see why you wouldn’t play that instead.

Space Gate Odyssey comes with some fun cardboard and plastic bits, and its combination of a tile-laying efficiency puzzle and a flat-out race to colonise planets makes for some multifaceted decisions. But its variable setup also makes it tough to teach, and it takes a while to really get into its stride, meaning you’ll need some patience to get to the interesting bits.