Sobek: 2 Players is the slightly clunkily named duelling version of the much loved 2010 card-based market game by Bruno Cathala. This time he’s joined, as he often is, by Sébastien Pauchon to put some refinement in to the two player rework of the game. The lovely and sometimes slightly amusing artwork by Xavier Gueniffey Durin is fabulous, updating the game with a bright modern feel that steps away from the classic dustiness of a market Eurogame – which seems to be the intention all round.

Rather than cards, this time we have tiles, laid out in a spiralling pattern on the board. This is important to mention, not for the production upgrade, but for the fact we’re now picking the goods available to us, not from a row of cards laid out in the market, but on the axis of the ankh.

This ankh, gold and wooden, is placed matching the direction of the piece just taken by the players – pointing orthogonally or diagonally. Their opponent is limited to picking from the row in either directions that it is pointing. Remembering to place the ankh in the right orientation is one of the main hurdles to playing properly, as it’s easy to take the tile for what it is, without noticing the direction indicators on them.

Picking the nearest tile is free, but picking one further away means collecting those between and adding them to the corruption board. This board is a collection of your sins (ready for weighing, as per the ancient Egyptian beliefs around the afterlife), is totted up at the end – the player with the least corruption gets a bonus, and then an extra bonus for the difference between them and the most corrupt players.

You’re collecting tiles to make sets of three or more – scores calculated at the end by the number of tiles in a set and how many scarabs are in the set, or to play immediately for the chance to draw a deben (gold coins that work as randomised victory point tokens) from the bag. Or you’re grabbing a character tile, to hold on to until you’re ready to play their power – which might be grabbing a bonus pirogue token from those removed at the start of the game, or adding to an already laid set, or drawing from the top of draw pile to your hand. 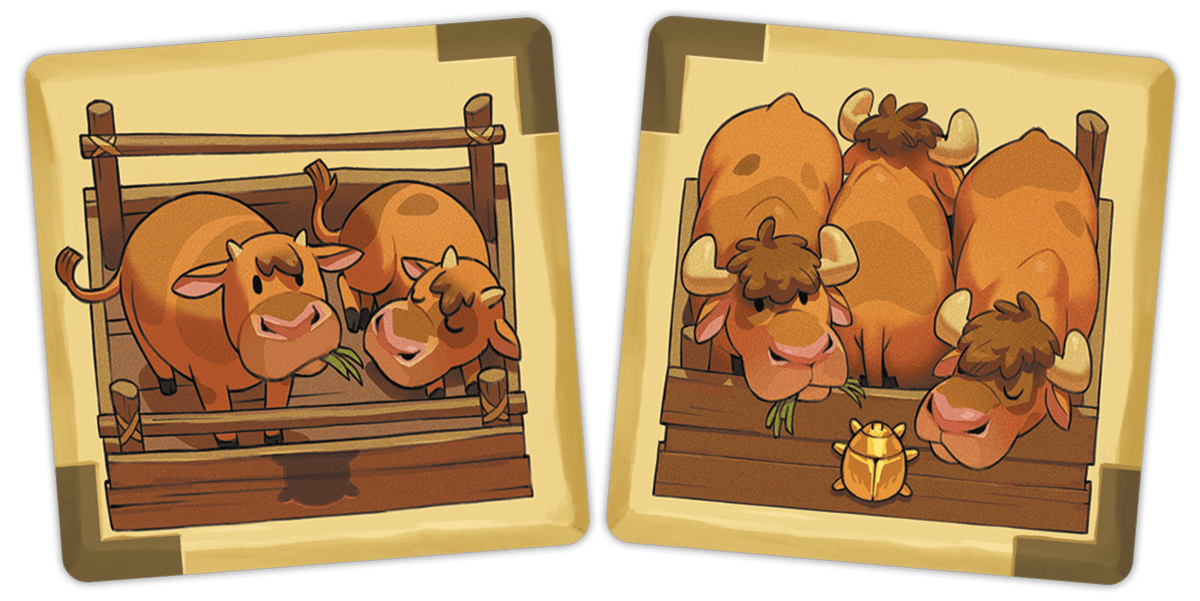 As a two player market tussle, it’s a strangely tactical feeling little game. The fact you’re orientating the board for your opponent each turn gives it a non-linear feel, despite its simple mechanics. The game end is triggered when neither player can take one of the three actions – which offers a bit of interesting flexibility during play with some players potentially being able to force an end earlier while they’re at an advantage. This, and the puzzle of what you’re lining your opponent up for on their turn (will they take the two corruption to get that tile with extra scarabs on it? Or go for a nearer tile that plays into the sets you’re collecting), makes the back and forth delicious. One for those who like to dive deep into a two player game to find its greatest treasures.

A wonderful rally of a game that gives you tools to deflect and obscure your way to victory.

TRY THIS IF YOU LIKED Ankh’or…

Or read our review of Ankh'or here!

If the quiet but complex nature of another co-authored Pauchon title suits your two player sessions, then Sobek: 2 Players is perfect for you both.