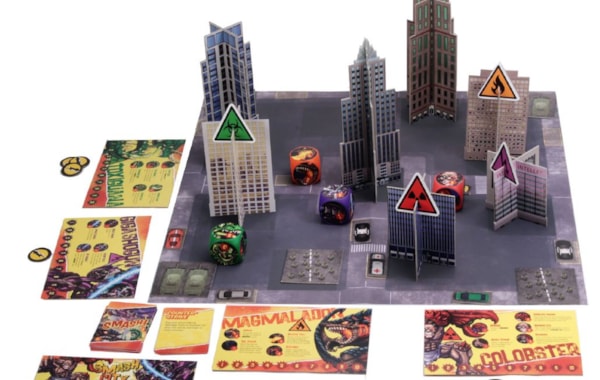 A brilliant toy spoiled by too much game

It’s impossible to see Smash City and not be instantly drawn to it. Set up and ready to play, it’s a thing of beauty and enticement, with a 3D cardboard city stretching up towards the ceiling. Players take control of giant kaiju monsters represented by oversized foam dice which they lob at this careful arrangement of buildings, scoring points for any they send tumbling to the ground.

Its appeal is the pure, childlike joy of mindless devastation – like building a sand castle before kicking it down – and it would take something special to ruin such a perfect and uncomplicated premise. Not to worry, though; Smash City manages it.

The core of the game is fine. Chucking things at other things has a timeless appeal, and you’ll aim to topple buildings so that they fall on your rivals’ dice, indicting damage and potentially knocking them out of the competition. To add insult to injury (and, indeed, injury to injury), you’ll be able to pick up nearby vehicle tokens and toss them at your rivals’ monsters. But at some point, the game seriously over-eggs the pudding. There’s a kind of area-control element, with players placing territory markers on buildings they’ve felled. Any other players whose dice touch them suffer damage. then there are the army units that menace the monsters, and which players can attack themselves. There are the various actions players can take based on the side their die lands on following every roll. And there are bonus abilities unlocked by earning special cards, many of which introduce timing complexities and interrupt the flow of the game.

The tragic thing about all this is that when Smash City limits itself to being a silly dexterity game, it’s actually incredibly fun. You batter buildings. You heft police cars at your friends. You watch in horror as your die takes an unexpected bounce and rolls off the end of the table. If you can do it all without cracking a smile, you’ve probably lost the capacity for joy in your life and I feel deeply sorry for you.

But throwing in a bunch of unnecessary ‘gamer’ elements stamps a Godzilla-sized foot on the very aspects that make Smash City so endearing. It also takes what seems like it should be an ideal game for parents to play with their kids and makes it needlessly inaccessible for younger players, especially those who haven’t developed great reading skills yet. The 14+ age rating on its box seems like a monstrous missed opportunity. The final impression is of going into the game expecting one thing, and being disappointed when it turns out to be something altogether different. It’s like buying tickets to see Metallica and turning up ready to do some damage in the mosh pit, only to find that they’ve decided to surprise fans with an impromptu ambient jazz set. It should be about bowling for buildings and playing skittles with skyscrapers. Instead it’s interspersed with clunky bits that  undermine the entire point of playing.