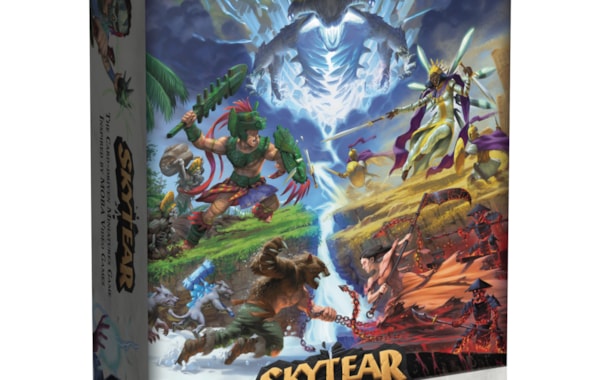 You know what you’re getting yourself into when the strapline for a game reads like someone threw darts at a board of tabletop buzzwords. Skytear’s description as ‘the card-driven miniatures game inspired by MOBA video games’ (just rolls off the tongue, doesn’t it?) is the sort of blurb that could only exist in the age of Kickstarter. It’s a game designed by and for a very specific group, one that’ll explosively cream its collective pants when they hear these terms put together. In the interests of fairness, I should state upfront that I’m a definite outsider to this group; I’ve never played a MOBA (Multiplayer Online Battle Arena) before and can only review Skytear as a boardgame rather than a videogame analogue.

The basic objective in Skytear is to destroy the enemy ‘nexus’. This is a point at one end of the board from where a player’s units – consisting of heroes and minions – spawn from at the beginning of the game or when they’re killed. The board is split into three zones – a left and right lane and a ‘dome’ area in the centre. Destroying the nexus requires players to first eliminate an enemy tower in one of the lanes. To do this, players have to dominate a control point in the centre of each lane. Gaining control of the dome, meanwhile, allows players to use the Outsider, a powerful neutral monster that grants the controlling player certain boons. Dominating a control point or the dome essentially comes down to having more miniatures in that location than the other player. This is the primary purpose of the minions, who cannot be moved around by players in a conventional sense, but provide ablative wounds and extra bodies. Games last up to five turns, and can also be finished by completing one of three objective cards randomly drawn from a deck. The meat of Skytear’s gameplay revolves around using heroes to gain control of the lanes or dome. Heroes come from one of four factions, each of which has its own strengths and set of abilities. Combat uses power cards, which grant special effects and also introduce an element of randomness in lieu of dice. For example, during combat a hero’s base damage is increased by a power card’s modifier, which is drawn blind from the top of a player’s deck.

Skytear is one of those games that demands its players learn the playstyles of each faction and hero and optimise their strategies over the course of many hours of play. The word ‘demand’ is used here with all the negative connotations the term implies, as there’s nothing about the game that’s aimed at enticing newcomers onboard. Partly this may be down to the presentation of the rules. Even with a five-minute intro video available via the Skytear website and a beginner mode that strips heroes of their powers, the game is in dire need of a single-page quickplay sheet for ease of reference. Its inaccessibility may also be down to the fact that perhaps the MOBA experience just doesn’t translate very well to a boardgame format.

Having to seize a lane’s control point rather than attacking towers directly just felt weird, and having to treat the minions as non-interactable NPCs went against every impulse habituated by miniatures games. This makes it sound like Skytear is a bad game. It’s not. Skytear competently brings together its various moving parts to provide a strategic experience with depth, and there’s enjoyment to be had in pulling off devastating combos against your opponent. Each faction feels balanced against each other, although the Aztec-themed Taulot, whose playstyle relies heavily on working in tandem with other Taulot figures, seemed to be at a slight disadvantage and the team that would most benefit from players purchasing its faction-specific booster.

Cliché though it may sound, Skytear is a prime example of a marmite game. If the idea of diceless gameplay, cards, miniatures and MOBAs all in one has you scrabbling at your wallet like it's on fire, knock yourself out. If you’re not part of that club, though, it’ll probably leave you feeling lukewarm.

A competently designed game catering to a speciﬁc type of gamer, others may ﬁnd themselves sky-torn about buying this.

Buy your copy of the game here.

TRY THIS IF YOU LIKED… WARHAMMER UNDERWORLDS