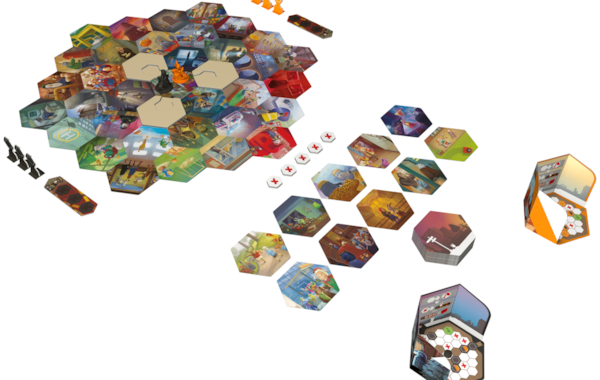 A little bit Dixit, a little bit Codenames, but a game all of its own

Buy your copy of Shadows: Amsterdam from us here.

Yes, there are echoes of those other games in the way that it sees two opposing teams racing around a hex grid, one clue-giving ‘intelligence officer’ on each side hoping to steer their detectives toward three hidden pieces of evidence and the client they must deliver them to by silently handing them sets of deliberately ambiguous picture cards. Are they giving you this image of a tree because they want you to go to the park, the flower shop or just because it’s mainly green, like the helicopter pad?

What makes Shadows different to the careful consider-every-possibility mulling of Codenames, though, is that it’s played completely in real time, neither team having to wait for their rivals to select a clue or make their move before they scoot their moped miniature and its anthropomorphic rider to their next destination. What’s more, both intelligence officers share the same grid of ten available intel cards to give as clues, so nabbing the perfect hint comes down to a bit of luck, speed and the faith that your team will know exactly what you're thinking.

With the pressure of identifying a wealth of visual similarities against the clock having the potential to overwhelm and frustrate, Shadows smartly limits things. The detectives’ mopeds only move one or two adjacent hexes at a time, determined by how many clue cards they’re given. It’s a small but meaningful detail that means you never have to consider the entire board and can instead focus on where you are, stopping detectives from spending precious seconds frozen with indecision – or making desperate guesses to try and outpace their rivals. Impassable obstacles around the centre of the modular layout, constructed from six of seven double-sided ‘districts’ and a handful of intel cards each round, further break up the map to keep things moving.

A combination of evidence exclusive to either team and hexes that can be claimed by either side, depending on who gets there first, sets up enough opportunities to butt heads without the feeling that everyone is continually treading on each other’s toes. In the same way, only half of the police hexes – landing on three loses the round for that team – are common between the hidden map cards used in team-colour pairs by the intelligence officers, so it’s not just a simple case of avoiding the spaces where the other team gets caught.

The artwork, themed around Amsterdam and its animal citizens, pops with character and colour. As with Mysterium and Dixit, the images are busy enough for a variety of clues to make sense – even with a bit of a leap at points – while being clear enough for elements to stand out and give a sense of the setting.

Having sets of the pictures locked into the seven preset districts helps speed up setup and makes it easy to change the board between rounds by flipping them over, but can lead to the same images becoming overly familiar game after game. A few more districts or enough intel cards to create completely randomised layouts would’ve been welcome. That said, the large number of potential map arrangements behind the screens and limited number of clues available for each move mean that Shadows doesn’t wear out its gameplay too quickly. The only part of the box that truly feels unnecessary is the small tracker marker used to follow the detectives’ movement on the map cards – more fiddly than it’s worth given how easy it is to see where they are on the main board, but at least specified as optional in the rules.

Shadows: Amsterdam isn’t quite as evergreen as Codenames or Dixit, but it’s a game that offers something fresh and different in a familiar mould. The switch to real-time deduction sets it apart, with the head-to-head race making it a standout party game. All the evidence points to a game that belongs in your collection.

The real-time race across the board means that Shadows: Amsterdam feels original as an experience and is huge fun to boot. It’s well deserving of your time.

Buy your copy of Shadows: Amsterdam from us here.