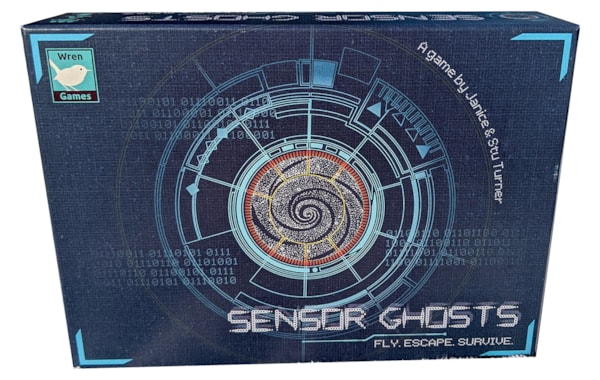 In space, no one can hear you navigate

Sensor Ghosts comes to us from Wren Games, a wife and husband duo with impressive physics backgrounds and an appreciation of sci-fi, so it makes sense that they make space games. It’s not precisely an expansion to their previous game Assembly, but more a standalone sequel, as after escaping the virus ridden space station in that game, Sensor Ghosts picks up your attempt to return home.

However, Earth is in quarantine, and reticent to allow you to return… unless you bring a clean virus sample. You can pick this up by navigating an asteroid field, but your sensors are hacked by the very computer you escaped in Assembly, making them less than helpful.

That translates into a game in the form of 37 sector cards, in varying colours that are laid out in a grid formation, placed in any order, that you will navigate. There are flat tokens placed on these to denote the samples and pods. As your sensors are faulty, upon turn you’ll flip the sector cards as you land on them, or preview them beforehand depending on the cards you hold. This means that sector cards that look safe, might turn into obstructed sectors, which are always bad and can destroy your ship. You’re relying on a mixture of memory and strategy to navigate to the virus samples and then on towards earth.

The game is relatively straightforward, but the instructions come with a number of variations which dictate difficulty level, layout, memory level, even whether you can talk and discuss your movements with other players or not. It’s almost an encouragement for house rules, but that’s not to say it’s a spacewalk. You can easily lose in Sensor Ghosts, but the game is quick to repeat and replay, so it never feels too strenuous or frustrating when it does so.

The game isn’t one that that has you singing from the rooftops, and the computer backstory doesn’t wholly come through if you haven’t played Assembly…but it’ll sit comfortably on your shelf for when you need a quick and flexible game to play.